Austenite, also known as gamma phase iron is a metallic non-magnetic allotrope of iron or a solid solution of iron, with an alloying element. In plain-carbon steel, austenite exists above the critical eutectoid temperature of 1,000 K (1,340 °F); other alloys of steel have different eutectoid temperatures. It is named after Sir William Chandler Roberts-Austen (1843–1902). 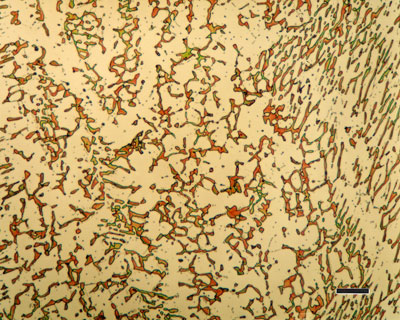 Austenite is a metallic, non-magnetic solid solution of carbon and iron that exists in steel above the critical temperature of 1333°F ( 723°C). Its face-centred cubic (FCC) structure allows it to hold a high proportion of carbon in solution. In many magnetic alloys, the Curie point, the temperature at which magnetic materials cease to behave magnetically, occurs at nearly the same temperature as the austenite transformation. This behavior is attributed to the paramagnetic nature of austenite, while both martensite and ferrite are strongly ferromagnetic.

END_OF_DOCUMENT_TOKEN_TO_BE_REPLACED

Figure above  shows the equilibrium diagram for combinations of carbon in a solid solution of iron. The diagram shows iron and carbons combined to form Fe-Fe3C at the 6.67%C end of the diagram. The left side of the diagram is pure iron combined with carbon, resulting in steel alloys. Three significant regions can be made relative to the steel portion of the diagram. They are the eutectoid E, the hypoeutectoid A, and the hypereutectoid B. The right side of the pure iron line is carbon in combination with various forms of iron called alpha iron (ferrite), gamma iron (austenite), and delta iron. The black dots mark clickable sections of the diagram.