Metals often show quite acceptable properties when small smooth bar specimens are tested in tension at ambient temperature and at slow loading rates. However they fail in a brittle manner when large components are loaded or when the loading is performed at low temperatures or applied rapidly. Susceptibility to brittle fracture is enhanced if notches or other defects are present. Resistance to brittle fracture is commonly referred to as toughness.

Metals with a body-centred cubic lattice, e.g. pure iron and ferritic steels have the unfortunate characteristic that their fracture mechanism undergoes a dramatic transition with decreasing temperature from a tough ductile mode in the higher temperature region to a brittle cleavage mode at lower temperatures. Face-centred cubic metals, e.g. copper, aluminium and austenitic steels, do not fail by cleavage under all loading conditions and at all temperatures.

Ductile fracture involves the formation, growth and coalescence of voids. A simple analogy is the fracture of plasticene or putty containing particles of sand. The voids form around precipitates or non-metallic inclusions, Figure 1. The ductility or toughness of the material is basically dependent on the volume fraction of the void nucleating particles, i.e. the proportion of sand in the previous analogy. The amount of deformation prior to rupture and thus the toughness of the material increases with its purity.

The fracture surface lies perpendicular to the maximum principal stress and appears macroscopically flat and crystalline. When viewed by eye a cleavage fracture usually displays characteristic chevron markings which point back to the origin of the fracture. When brittle fracture occurs in a large structure, such markings can be invaluable in identifying the site of crack initiation. 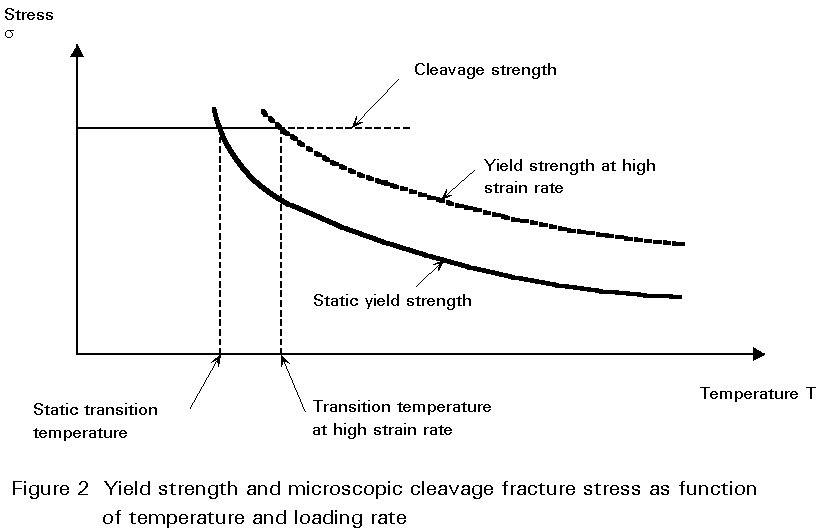 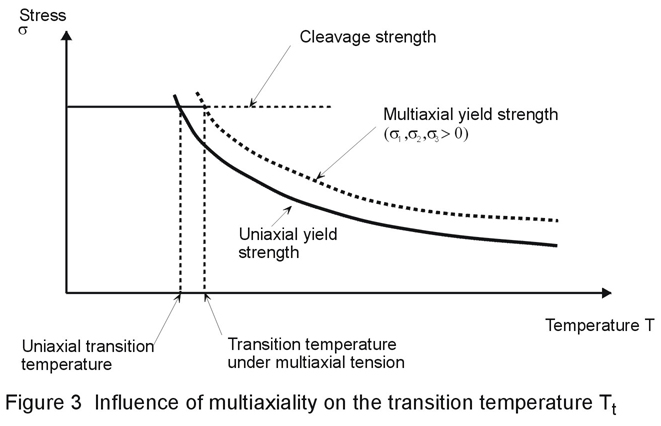 The most familiar situation in which multi-axial states of stress are encountered in steel structures is in association with notches or cracks in thick sections. The stress concentration at the root of the notch gives rise a local region of triaxial stresses even through the applied loading may be uni-directional (Figure 4). 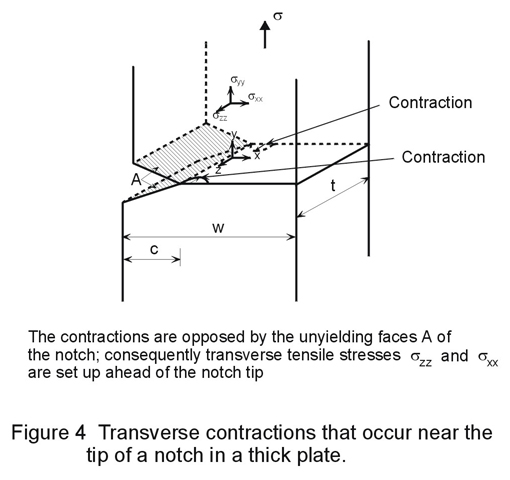 The notched impact bend test is the most common test for the assessment of susceptibility to brittle fracture because it is inexpensive and quickly performed. 10mm square bars with a machined notch, (ISO-V or Charpy specimens), are struck by a calibrated pendulum. The energy absorbed from the swinging pendulum during deformation and fracture of the test specimen is used as a measure of the impact energy. The notch impact energy consists of elastic and plastic deformation work, fracture energy and kinetic energy of the broken pieces.

Figures 5 and 6 show the notch impact energy as a function of testing temperature. At low temperatures the failure of ferritic steels occurs by cleavage fracture giving a lustrous crystalline appearance to the fracture surface. At high temperatures failure occurs by ductile fracture after plastic deformation. In the transition range small amounts of ductile fracture are found close to the notch but, due to the elevated stresses near the crack tip, the fracture mechanism changes to cleavage. Throughout the transition range the amount of cleavage fracture becomes less and the notch impact energy rises as the testing temperature increases. 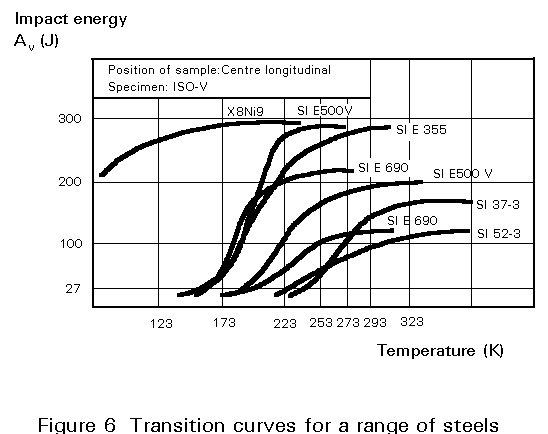 The impact energy values obtained show a high amount of scatter in the transition area because here the results depend on the local situation ahead of the crack tip. Beyond this area, scatter becomes less because there is no change of fracture mechanism.

The notched impact bend test gives only a relative measure of toughness. This measure is adequate for defining different grades of toughness in structural steels and for specifying steels for well established conditions of service. For the assessment of known defects and for service situations where there is little experience of brittle fracture susceptibility, a quantitative measure of toughness which can be used by design engineers is provided by fracture mechanics.