Cast iron is derived from pig iron, and while it usually refers to gray iron, it also identifies a large group of ferrous alloys which solidify with a eutectic. The colour of a fractured surface can be used to identify an alloy. White cast iron is named after its white surface when fractured, due to its carbide impurities which allow cracks to pass straight through. Grey cast iron is named after its grey fractured surface, which occurs because the graphitic flakes deflect a passing crack and initiate countless new cracks as the material breaks. 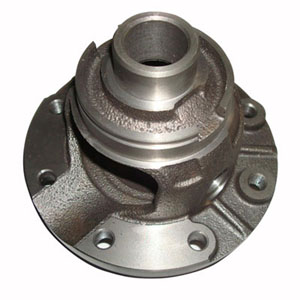 Carbon (C) and silicon (Si) are the main alloying elements, with the amount ranging from 2.1 to 4 wt% and 1 to 3 wt%, respectively. Iron alloys with less carbon content are known as steel.

While this technically makes these base alloys ternary Fe-C-Si alloys, the principle of cast iron solidification is understood from the binary iron-carbon phase diagram. Since the compositions of most cast irons are around the eutectic point of the iron-carbon system, the melting temperatures closely correlate, usually ranging from 1,150 to 1,200 °C (2,102 to 2,192 °F), which is about 300 °C (572 °F) lower than the melting point of pure iron.

Cast iron tends to be brittle, except for malleable cast irons. With its relatively low melting point, good fluidity, castability, excellent machinability, resistance to deformation and wear resistance, cast irons have become an engineering material with a wide range of applications and are used in pipes, machines and automotive industry parts, such as cylinder heads (declining usage), cylinder blocks and gearbox cases (declining usage). It is resistant to destruction and weakening by oxidisation (rust). 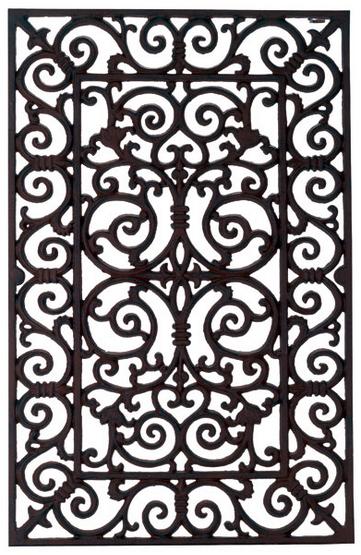 Cast iron is made by re-melting pig iron, often along with substantial quantities of scrap iron and scrap steel and taking various steps to remove undesirable contaminants such as phosphorus and sulphur. Depending on the application, carbon and silicon content are reduced to the desired levels, which may be anywhere from 2 to 3.5% and 1 to 3% respectively. Other elements are then added to the melt before the final form is produced by casting.[citation needed]Iron is sometimes melted in a special type of blast furnace known as a cupola, but more often melted in electric induction furnaces.[citation needed] After melting is complete, the molten iron is poured into a holding furnace or ladle. 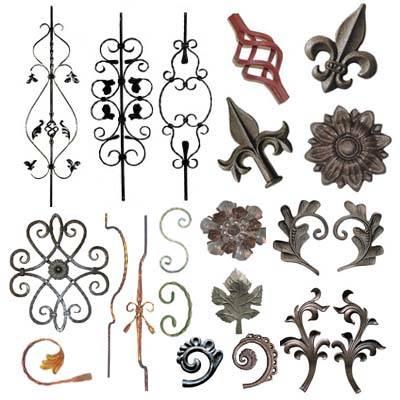 Cast iron’s properties are changed by adding various alloying elements, or alloyants. Next to carbon, silicon is the most important alloyant because it forces carbon out of solution. Instead the carbon forms graphite which results in a softer iron, reduces shrinkage, lowers strength, and decreases density. Sulfur, when added, forms iron sulfide, which prevents the formation of graphite and increases hardness. 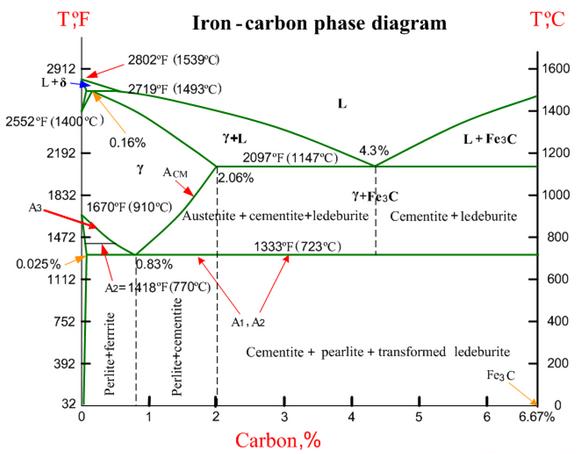 Nickel is one of the most common alloyants because it refines the pearlite and graphite structure, improves toughness, and evens out hardness differences between section thicknesses. Chromium is added in small amounts to the ladle to reduce free graphite, produce chill, and because it is a powerful carbide stabilizer; nickel is often added in conjunction. A small amount of tin can be added as a substitute for 0.5% chromium. Copper is added in the ladle or in the furnace, on the order of 0.5 to 2.5%, to decrease chill, refine graphite, and increase fluidity.

Kitchen Set made from Cast Iron

Molybdenum is added on the order of 0.3 to 1% to increase chill and refine the graphite and pearlite structure; it is often added in conjunction with nickel, copper, and chromium to form high strength irons. Titanium is added as a degasser and deoxidizer, but it also increases fluidity. 0.15 to 0.5% vanadium are added to cast iron to stabilize cementite, increase hardness, and increase resistance to wear and heat. 0.1 to 0.3% zirconium helps to form graphite, deoxidize, and increase fluidity.In malleable iron melts, bismuth is added, on the scale of 0.002 to 0.01%, to increase how much silicon can be added. In white iron, boron is added to aid in the production of malleable iron, it also reduces the coarsening effect of bismuth. 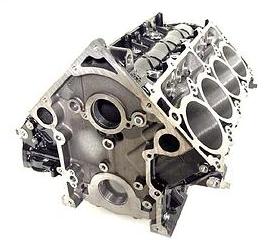 Machine Block made from Cast Iron

Grey cast iron is characterized by its graphitic microstructure, which causes fractures of the material to have a grey appearance. It is the most commonly used cast iron and the most widely used cast material based on weight. 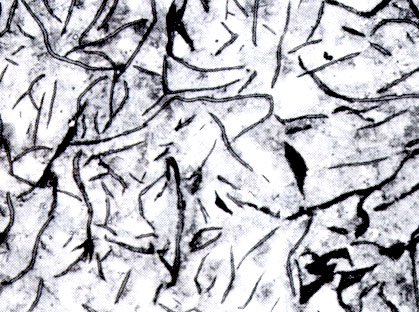 Most cast irons have a chemical composition of 2.5 to 4.0% carbon, 1 to 3% silicon, and the remainder is iron. Grey cast iron has less tensile strength and shock resistance than steel, but its compressive strength is comparable to low and medium carbon steel.

With a lower silicon content and faster cooling, the carbon in white cast iron precipitates out of the melt as the metastable phase cementite, Fe3C, rather than graphite. The cementite which precipitates from the melt forms as relatively large particles, usually in a eutectic mixture, where the other phase is austenite (which on cooling might transform to martensite). 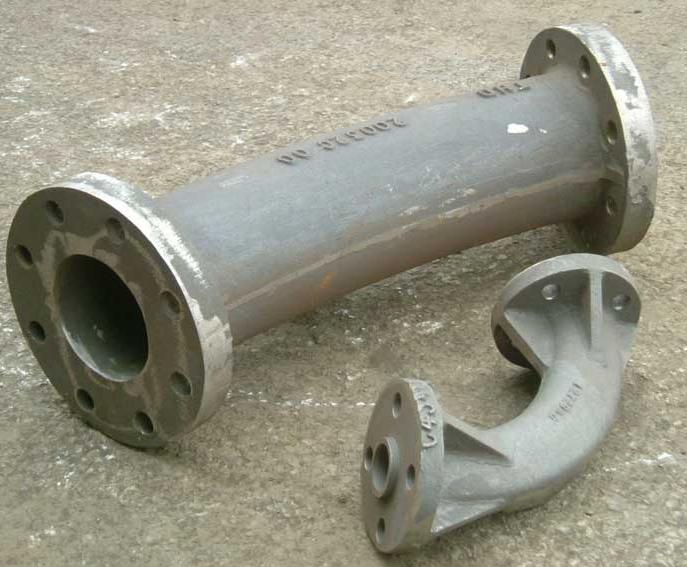 White Iron is unalloyed cast iron with low carbon and silicon content such that the structure is hard brittle iron carbide with no free graphite. White cast irons are widely used in abrasive wear applications involved in the crushing, grinding, milling and handling of abrasive materials

These eutectic carbides are much too large to provide precipitation hardening (as in some steels, where cementite precipitates might inhibit plastic deformation by impeding the movement of dislocations through the ferrite matrix).

Rather, they increase the bulk hardness of the cast iron simply by virtue of their own very high hardness and their substantial volume fraction, such that the bulk hardness can be approximated by a rule of mixtures. In any case, they offer hardness at the expense of toughness. Since carbide makes up a large fraction of the material, white cast iron could reasonably be classified as a cermet. 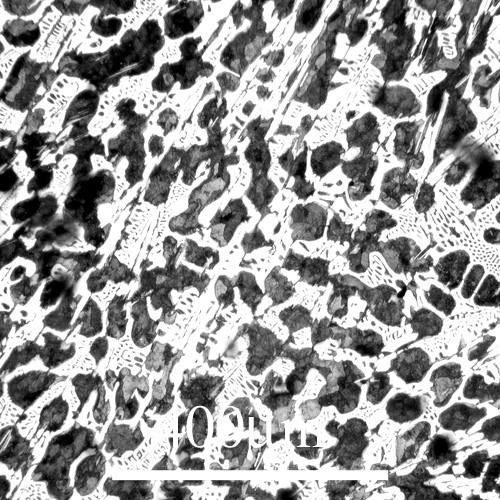 White iron is too brittle for use in many structural components, but with good hardness and abrasion resistance and relatively low cost, it finds use in such applications as the wear surfaces (impeller and volute) of slurry pumps, shell liners and lifter bars in ball mills and autogenous grinding mills, balls and rings in coal pulverisers, and the teeth of a backhoe’s digging bucket (although cast medium-carbon martensitic steel is more common for this application).

Malleable iron starts as a white iron casting that is then heat treated at about 900 °C (1,650 °F). Graphite separates out much more slowly in this case, so that surface tension has time to form it into spheroidal particles rather than flakes. Due to their lower aspect ratio, spheroids are relatively short and far from one another, and have a lower cross section vis-a-vis a propagating crack or phonon. 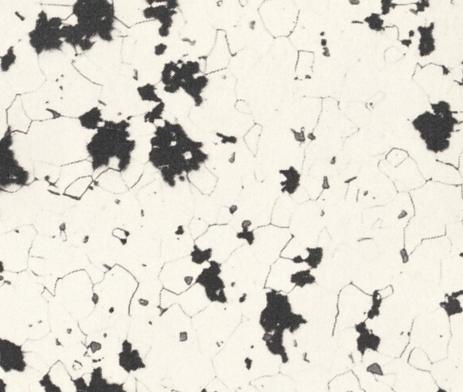 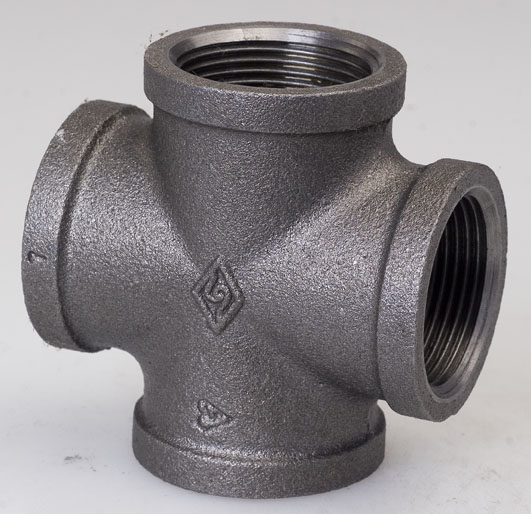 They also have blunt boundaries, as opposed to flakes, which alleviates the stress concentration problems faced by grey cast iron. In general, the properties of malleable cast iron are more like mild steel. There is a limit to how large a part can be cast in malleable iron, since it is made from white cast iron. 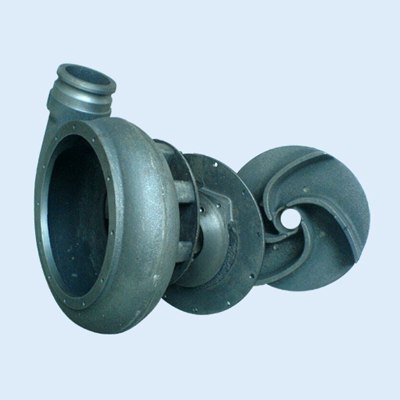 A more recent development is nodular or ductile cast iron. Tiny amounts of magnesium or cerium added to these alloys slow down the growth of graphite precipitates by bonding to the edges of the graphite planes. 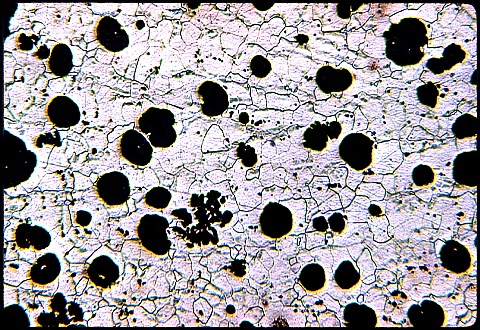 Along with careful control of other elements and timing, this allows the carbon to separate as spheroidal particles as the material solidifies. The properties are similar to malleable iron, but parts can be cast with larger sections.

Dou you need some book`s references of Cast Iron? here…