A metal matrix composite (MMC) is composite material with at least two constituent parts, one being a metal. The other material may be a different metal or another material, such as a ceramic or organic compound. When at least three materials are present, it is called a hybrid composite. An MMC is complementary to a cermet.

MMCs are made by dispersing a reinforcing material into a metal matrix. The reinforcement surface can be coated to prevent a chemical reaction with the matrix. For example, carbon fibers are commonly used in aluminum matrix to synthesize composites showing low density and high strength. However, carbon reacts with aluminum to generate a brittle and water-soluble compound Al4C3 on the surface of the fiber. To prevent this reaction, the carbon fibers are coated with nickel or titanium boride.

The matrix is the monolithic material into which the reinforcement is embedded, and is completely continuous. This means that there is a path through the matrix to any point in the material, unlike two materials sandwiched together. In structural applications, the matrix is usually a lighter metal such as aluminum, magnesium, or titanium, and provides a compliant support for the reinforcement. In high-temperature applications, cobalt and cobalt–nickel alloy matrices are common. 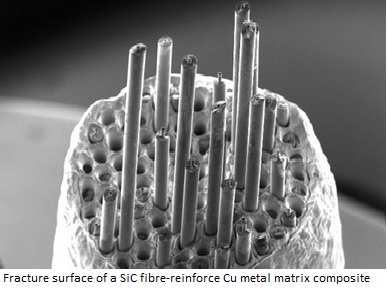 The reinforcement material is embedded into the matrix. The reinforcement does not always serve a purely structural task (reinforcing the compound), but is also used to change physical properties such as wear resistance, friction coefficient, or thermal conductivity. The reinforcement can be either continuous, or discontinuous. Discontinuous MMCs can be isotropic, and can be worked with standard metalworking techniques, such as extrusion, forging, or rolling. In addition, they may be machined using conventional techniques, but commonly would need the use of polycrystaline diamond tooling (PCD).

Continuous reinforcement uses monofilament wires or fibers such as carbon fiber or silicon carbide. Because the fibers are embedded into the matrix in a certain direction, the result is an anisotropic structure in which the alignment of the material affects its strength. One of the first MMCs used boron filament as reinforcement. Discontinuous reinforcement uses “whiskers”, short fibers, or particles. The most common reinforcing materials in this category are alumina and silicon carbide.

MMC manufacturing can be broken into three types—solid, liquid, and vapor :

2 Trackbacks / Pingbacks for this entry