Carbon-fiber-reinforced polymer is used extensively in high-end automobile racing. The high cost of carbon fiber is mitigated by the material’s unsurpassed strength-to-weight ratio, and low weight is essential for high-performance automobile racing. Race car manufacturers have also developed methods to give carbon fiber pieces strength in a certain direction, making it strong in a load-bearing direction, but weak in directions where little or no load would be placed on the member. Conversely, manufacturers developed omnidirectional carbon fiber weaves that apply strength in all directions. This type of carbon fiber assembly is most widely used in the “safety cell” monocoque chassis assembly of high-performance race cars.

Carbon-fiber-reinforced polymer (CFRP) has become a notable material in structural engineering applications. Studied in an academic context as to its potential benefits in construction, it has also proved itself cost-effective in a number of field applications strengthening concrete, masonry, steel, cast iron, and timber structures. Its use in industry can be either for retrofitting to strengthen an existing structure or as an alternative reinforcing (or prestressing) material instead of steel from the outset of a project.

Retrofitting has become the increasingly dominant use of the material in civil engineering, and applications include increasing the load capacity of old structures (such as bridges) that were designed to tolerate far lower service loads than they are experiencing today, seismic retrofitting, and repair of damaged structures. Retrofitting is popular in many instances as the cost of replacing the deficient structure can greatly exceed its strengthening using CFRP.

Carbon-fiber-reinforced polymer has found use in sports equipment such as racing bicycles. For the same strength, a carbon fiber frame weighs less than a bicycle tubing of steel, aluminum, or titanium. The choice of carbon-fiber weave can be carefully selected to maximize stiffness and minimize the chance of failure. The variety of shapes it can be built into has further increased stiffness and also allowed aerodynamic considerations into tube profiles. Carbon-fiber-reinforced polymer frames, forks, handlebars, seatposts, and crank arms are becoming more common on medium- and higher-priced bicycles.

While carbon-fiber frames and components can be both lighter and stiffer than those made of traditional metals, under some circumstances they have shown significant rates of cracking and failure. This can occur as because of a collision, but if components are overtorqued or improperly installed, cracking and failure can also result. It is possible for broken carbon frames to be repaired.

CFRP has also found application in the construction of high-end audio components such as turntables and loudspeakers, again due to its stiffness. It is used for parts in a variety of musical instruments, including violin bows, guitar pick-guards, and a durable ebony replacement for bagpipe chanters. It is also used to create entire musical instruments such as Viktorian Guitars carbon fiber rider models, Luis and Clark carbon fiber cellos, and Mix carbon fiber mandolins. 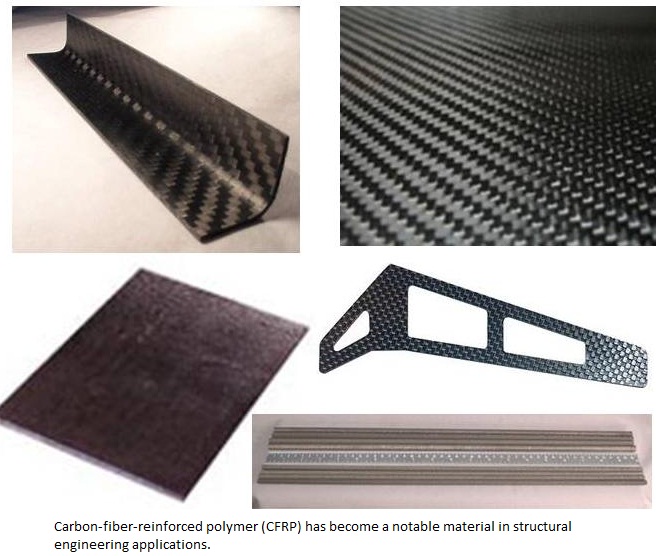 Carbon-fiber-reinforced polymer, carbon-fiber-reinforced plastic or carbon-fiber reinforced thermoplastic (CFRP, CRP, CFRTP or often simply carbon fiber, or even carbon), is an extremely strong and light fiber-reinforced polymer which contains carbon fibers. The binding polymer is often a thermoset resin such as epoxy, but other thermoset or thermoplastic polymers, such as polyester, vinyl ester or nylon, are sometimes used. The composite may contain other fibers, such as aramid e.g. Kevlar, Twaron, aluminium, or glass fibers, as well as carbon fiber. The properties of the final CFRP product can also be affected by the type of additives introduced to the binding matrix (the resin). The most frequent additive is silica, but other additives such as rubber and carbon nanotubes can be used. CFRPs are commonly used in the transportation industry; normally in cars, boats and trains, and in sporting goods industry for manufacture of bicycles, bicycle components, golfing equipment and fishing rods.

Although carbon fiber can be relatively expensive, it has many applications in aerospace and automotive fields, such as Formula One racing. The compound is also used in sailboats, rowing shells, modern bicycles, and motorcycles because of its high strength-to-weight ratio and very good rigidity. Improved manufacturing techniques are reducing the costs and time to manufacture, making it increasingly common in small consumer goods as well, such as certain ThinkPads since the 600 series, tripods, fishing rods, hockey sticks, paintball equipment, archery equipment, tent poles, racquet frames, stringed instrument bodies, drum shells, golf clubs, helmets used as a paragliding accessory and pool/billiards/snooker cues.

In firearms it can substitute for metal, wood, and fiberglass in many areas of a firearm in order to reduce overall weight. However, while it is possible to make the receiver out of synthetic material such as carbon fiber, many of the internal parts are still limited to metal alloys as current reinforced plastics are unsuitable replacements. CFRP is used, either as standard equipment or in aftermarket parts, in high-performance radio-controlled vehicles and aircraft, e.g. for the main rotor blades of radio controlled helicopters—which should be light and stiff to perform fast aerobatic maneuvers.