Structure and Components of Steel

The engineering properties of steel, i.e. strength, ductility and resistance against brittle fracture, depend on its crystalline structure, grain size and other metallurgical characteristics.These microstructural properties are dependent on the chemical composition and on the temperature-deformation history of the steel. Heat treatments that occur during welding may also have a large influence on the engineering properties.

When selecting steel for welded structures, it is important to have at least a basic knowledge of metallurgy. This knowledge is required especially when large and complicated structures are being designed, such as bridges, offshore structures, and high rise buildings. Selecting materials, welding processes and welding consumables usually requires consultation of “real” metallurgists and welding specialists. 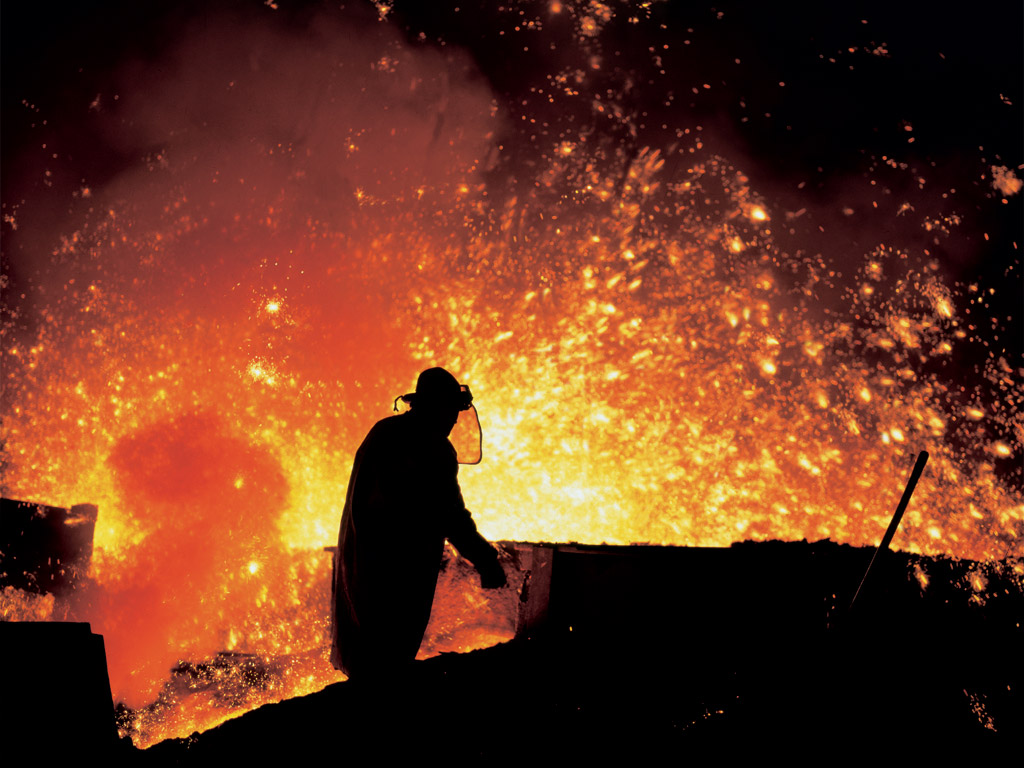 Metallurgists are engineers that study the properties of metals

To get an impression of the metallurgical structure of steel, a piece of steel bar can be cut to expose a longitudinal section, the exposed surface ground and polished and examined under a microscope. 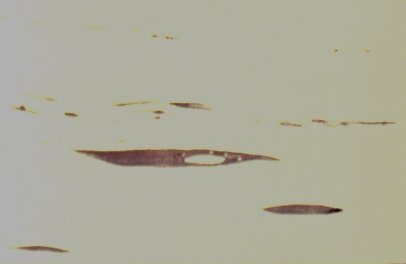 At modest magnifications, a few particles are seen which are extended in the direction of rolling of the bar, see Slide 1. These particles are inclusions. They are non-metallic substances which have become entrained within the metal during its manufacture, mostly by accident but sometimes by design. Their presence does not affect the strength but has an adverse effect on ductility and toughness. Particular types of inclusion can greatly enhance the machinability of steels and may therefore be introduced deliberately.

To reveal the true structure of the metal, the polished surface must be chemically etched. When this is done, a wide diversity of microstructure may be seen which reflects the composition of the steel and its processing, see Slides 2 - 5. The microstructure has a significant effect on the engineering properties as described in later sections of this lecture.

Steels and cast irons are alloys of iron (Fe) with carbon (C) and various other elements, some of them being unavoidable impurities whilst others are added deliberately. 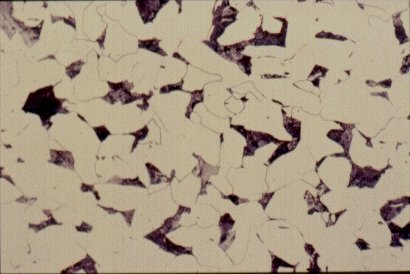 Carbon exerts the most significant effect on the microstructure of the material and its properties. Steels usually contain less than 1% carbon by weight. Structural steels contain less than 0,25% carbon: the other principal alloying element is manganese, which is added in amounts up to about 1,5%. Further alloying elements are chromium (Cr), nickel (Ni), molybdenum (Mo) etc. Elements such as sulphur (S), phosphorus, (P), nitrogen (N) and hydrogen (H) usually have an adverse effect on the engineering properties and during the steel production, measures are taken to reduce their contents. Cast irons generally contain about 4% carbon. This very high content of carbon makes their microstructure and mechanical properties very different from those of steels. 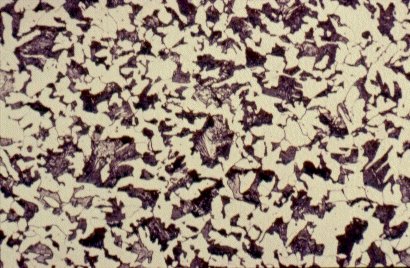 Each of the microstructures shown in Slides 2, 3, 4 and 5 is an assembly of smaller constituents. For example, the 0,2% C steel of Slide 2 is predominantly an aggregate of small, polyhedral grains, in this case <20mm in size. 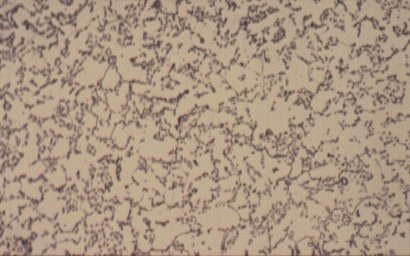 Closer examination of one of these grains shows it to be a single crystal. However, unlike crystals of quartz or silicon or copper sulphate, crystals of iron (Fe) are soft and ductile. The internal structure of these crystals is discussed later. 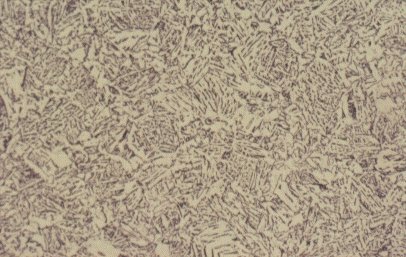 The steel of Slide 2 is an example of a polycrystalline substance which has been made visible by polishing and etching.
(a) The surface is polished but not etched.
(b) The surface is polished and etched. Different reflections of the light indicate different orientation of crystals (polycrystalline structure).
(c) Some etchants affect only the grain boundaries. These etchants are used when it is required to investigate the grain structure, e.g. to estimate the grain size.
(d) The appearance of etched grain boundaries
(e) The appearance of a steel with 0,15% carbon (enlargement 100x). The dark areas are pearlite. The grain boundaries are clearly indicated. The dark areas indicate the presence of carbon.

By adjusting the history of rolling and heating treatment experienced by the steel during its production, the grain size can be altered. This technique is useful because the grain size affects the properties. In particular, the yield strength is determined by the grain size, according to the so-called Petch equation:

The internal structure of the crystal grains is composed of iron atoms arranged according to a regular three-dimensional pattern. The pattern is illustrated in Figure 2. This pattern is the body-centred cubic crystal structure; atoms are found at the corners of the cube and at its centre. The unit cell is only 0,28nm along its edges. A typical grain is composed of about 1015 repetitions of this unit. This crystal structure of iron at ambient temperature is one of the major factors determining the metallurgy and properties of steels. 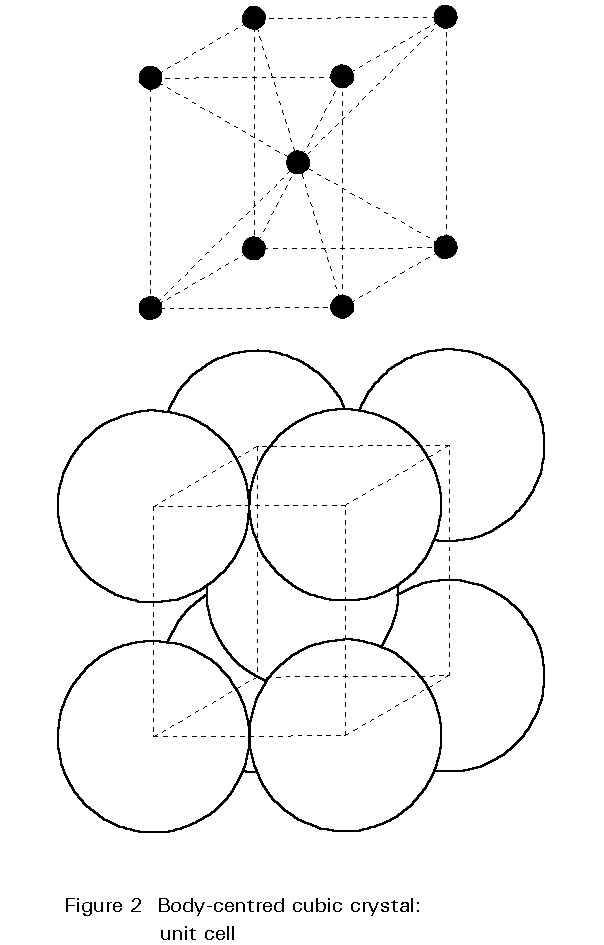 Steels contain carbon. Some of it, a very small amount, is contained within the crystals of iron. The carbon atoms are very small and can fit, with some distortion, into the larger gaps between the iron atoms. This arrangement forms what is known as an interstitial solid solution: the carbon is located in the interstices of the iron crystal.

In the steels of Slides 2, 3 and 4, most of the remaining carbon has formed a chemical compound with the iron, Fe3C, iron carbide or cementite. Iron carbide is also crystalline but it is hard and brittle. With 0,1%C, there is only a small amount of Fe3C in steel. The properties of such steel are similar to those of pure iron). It is ductile but not particularly strong and is used for many purposes where ability to be shaped by bending or folding is the dominant requirement. 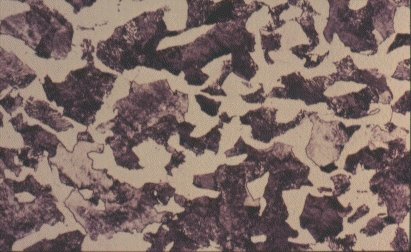 For a steel of higher carbon content, say 0,4%, as shown in Slide 5, a low magnification shows it to be composed of light and dark regions - about 50:50 in this case. The light regions are iron crystals containing very little dissolved carbon, as in the low carbon steel. The dark regions need closer examination. Slide 6 shows one such region at higher magnification. It is seen to be composed of alternate layers of two substances, iron and Fe3C. The spacing of the laminae is often close to the wavelength of light and consequently the etched structure can act as a diffraction grating, giving optical effects which appear as a pearl-like iridescence. Consequently, this mixture or iron and iron carbide has acquired the name ‘pearlite’. The origin of the pearlite and its effect on the properties of steel are revealed by examining what happens during heating and cooling of steel.

Structure and Components of Steel