Formation of martensite and bainite

Normalising causes steels to undercool below the requirements of the phase diagram before the austenite transforms into fine ferrite and pearlite. Still further increases in cooling rate give further undercooling and still finer microstructures. Very rapid cooling by quenching into cold water, causes the formation of ferrite and pearlite to be suspended. 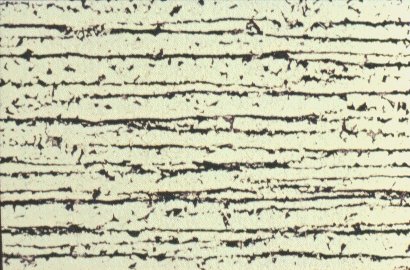 The internal diffusion-controlled rearrangement of atoms needed to form those products cannot occur sufficiently rapidly. Instead, new products are formed by microstructural shear transformations at lower temperatures. Very fast cooling gives martensite: its microstructure is shown above. When martensite forms, there is no time for the formation of cementite and the austenite transforms to a highly distorted form of ferrite which is super saturated with dissolved carbon.

The combination of the lattice distortion and the severe work hardening resulting from the shear deformation processes necessary to achieve the transformation cause martensite to be extremely strong but very brittle. Less rapid cooling can give a product called bainite. This is similar to tempered martensite where much of the carbon has come out of solution and formed fine needles of cementite which reinforce the ferrite.

Civil engineering structures are not heat-treated by heating to, say, 900°C and quenching into water. However, there is one important circumstance which can produce martensite in localised parts of the structure, and that is welding. The weld zone is raised to the melting temperature of the steel and the immediately adjacent solid metal is heated to temperatures well within the austenite range. When the heat source is removed, the whole region cools at rates determined mainly be thermal conduction into the surrounding mass of cold metal. These rates of cooling can be very large, exceeding 1000°C per second in some cases and can produce transformation structures such as martensite and bainite. The properties of rapidly cooled steels and the influence of carbon content on the nature of the transformation product - ferrite and pearlite, or bainite, or martensite - are discussed below.

Figure 14 shows the hardness of martensite as a function of its carbon content. Reheating martensite to temperatures up to about 600°C causes cementite to precipitate which causes the steel to soften and become much tougher. This reheating is known as tempering. The extent of these changes increases as the reheating temperature increases, as shown in Figure 15. Tempering at 600°C produces an extremely tough material. What is more, its ductile-brittle transition temperature is lower than for the same steel in the normalised condition. Bainite has properties similar to those of tempered martensite.

The process of quenching and tempering, when allied to changes of steel composition, can produce a bewilderingly wide range of properties. Steels heat-treated in this way are used for a multiplicity of general engineering purposes which demand hardness, wear resistance, strength and toughness. Once again, compromises must be struck between these desirable properties but generally quenched and tempered steels exhibit optimum combinations of strength and toughness. For structural purposes quenched and tempered plate is used in large storage tanks, hoppers, earthmoving equipment, etc.

Martensite produced in a weld heat-affected zone as a result of single pass welding would be in its hard and brittle untempered condition. Furthermore, the formation of martensite from austenite is accompanied by a volume expansion of approximately 0,4%. This expansion, together with the uneven thermal contractions taking place as a result of uneven cooling, can produce local stresses of sufficient magnitude to crack the martensite. Because this type of cracking occurs after the HAZ has cooled, it is referred to as cold cracking. 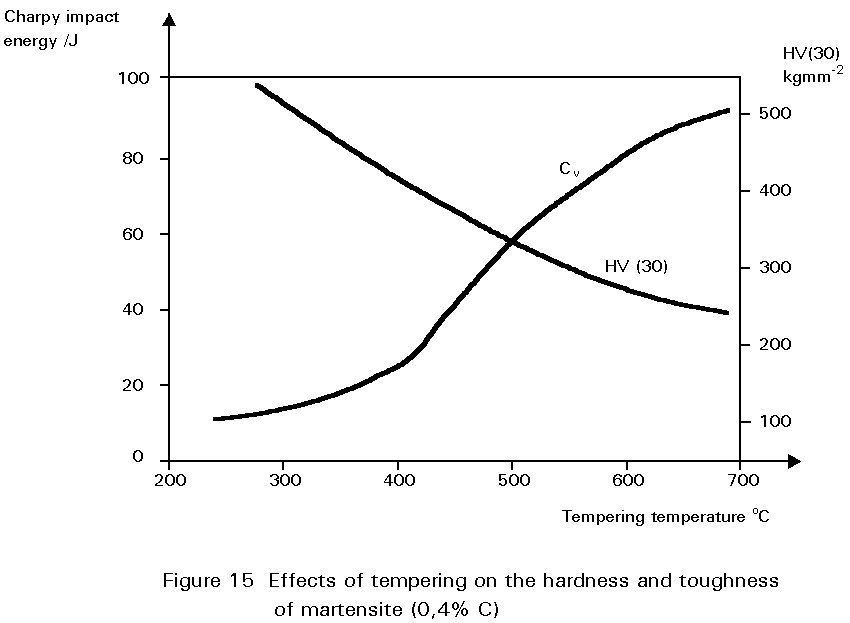 The cracking problem can be further aggravated if the weld has picked up hydrogen. Sources of hydrogen during welding might include moisture from the atmosphere or damp welding electrodes. Hydrogen dissolved in the weld metal diffuses to the hard HAZ where it initiates cracks at sites of stress concentration. This diffusion can lead to cracking which occurs some time, even days, after the welding is completed. Hard HAZs of low ductility are less able to cope with this problem than are softer and more ductile materials. This type of cracking is called delayed cracking or hydrogen cracking.

Avoidance of cold cracking and hydrogen cracking requires that the material should not be overhardened. As a rule of thumb, as-welded hardnesses of less than about HV = 350 are considered to be acceptable. In modern fine grain low carbon steels the “allowable” hardness may be increased to HV = 400 or even HV = 450.

The danger of hydrogen cracking may also be present in high strength quenched and tempered steels, e.g. 10.9 bolts (Re ³ 900 N/mm2 and Rm ³ 1000 N/mm2). When such bolts are electroplated with zinc or cadmium, hydrogen may be picked up from the plating bath. Usually cracking does not occur until sometime after tightening bolts when the hydrogen has diffused to the sites of stress concentration at the thread roots. 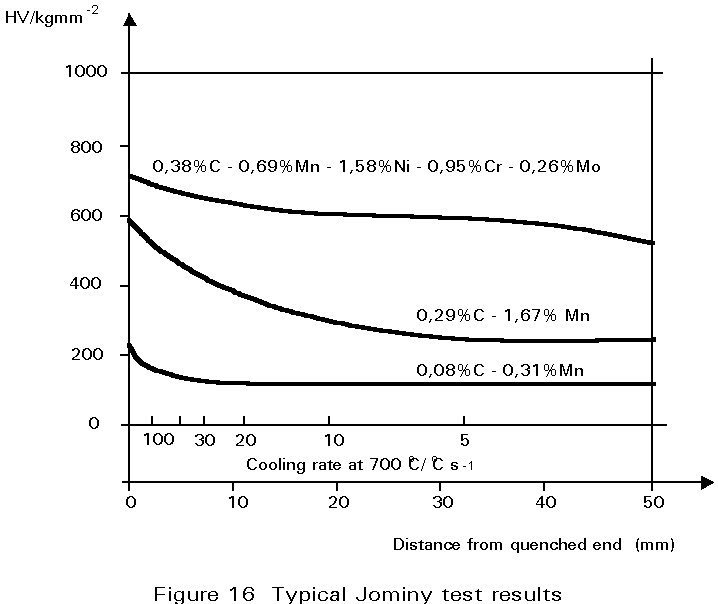 The most convenient method of assessing hardenability is the so called Jominy end quench. A rod-shaped sample is austenitised and then quenched by spraying water onto one end face such that different cooling rates are produced along the length of the bar. Thereafter, a flat is ground along its length and the hardness measured as a function of distance from the quenched end.

Some typical results are shown in Figure 16 for three different steels. For a carbon steel containing 0,08%C and 0,3%Mn, cooling rates at 700°C of greater than about 50°C s-1 are necessary to form martensite. On the other hand in the 0,29%C, 1,7%Mn steel, martensite forms at much slower cooling rates. It is mainly the increased carbon content that causes this difference. In the alloy steel illustrated, martensite is formed even at very slow cooling rates. 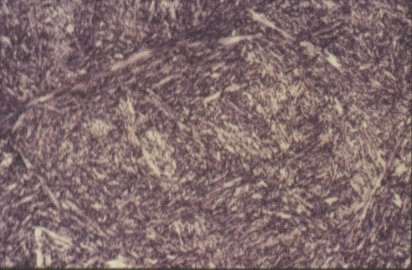 The significance of these curves depends very much on what is being produced. If it is a thick-section gear wheel, the alloy steel would be ideal. It could be cooled gently and still produce martensite, the gentle cooling being an advantage because it would reduce stresses arising from differential contraction rates, and hence reduce the possibility of quench cracking. Thereafter, it could be tempered to achieve the desired combination of strength and toughness. On the other hand, for a welded joint, the plain carbon steel would be preferable in which it is difficult to form martensite and the hardness of any martensite produced would be relatively low.

Welding presents particular problems for the metallurgist. Slide above shows a micro section through a typical structural weld. The micro structures range from the coarse grained cast structure of the weld deposit, to the heat affected zone (HAZ) and to the unaffected microstructure of the parent metal. Both the deposited weld metal and the HAZ must have adequate strength and toughness after welding.

For welding, a steel of low hardenability is therefore required. Hardenability is affected by steel composition, including not only carbon content but other alloying elements as well. To take all of these factors into account, the concept of the carbon equivalent value is used. There are a number of ways of calculating carbon equivalents for use in different circumstances. In the context of welding :

If the CE is lower than about 0,4%, the steel can be welded with little or no trouble from martensite and HAZ hydrogen cracking. As indicated before, the cooling rate is also an important factor, which means that during welding, thick plates are more susceptible to hydrogen cracking than thin plates. To reduce susceptibility to martensite formation, the cooling rate (between 800°C and 500°C) can be reduced by preheating the plates before welding.