Ferrite also known as alpha iron is a materials science term for iron, or a solid solution with iron as the main constituent, with a body-centered cubic crystal structure. It is this crystalline structure which gives steel and cast iron their magnetic properties, and is the classic example of a ferromagnetic material. Practically speaking, it can be considered pure iron. It has a strength of 280 N/mm2 and a hardness of approximately 80 Brinell.

Ferrites are chemical compounds consisting of ceramic materials with iron(III) oxide (Fe2O3) as their principal component. Many of them are magnetic materials and they are used to make permanent magnets, ferrite cores for transformers, and in various other applications.

Mild steel (carbon steel with up to about 0.2 wt% C) consist mostly of ferrite, with increasing amounts of pearlite (a fine lamellar structure of ferrite and cementite) as the carbon content is increased. Since bainite (shown as ledeburite on the diagram at the bottom of this page) and pearlite each have ferrite as a component, any iron-carbon alloy will contain some amount of ferrite if it is allowed to reach equilibrium at room temperature. The exact amount of ferrite will depend on the cooling processes the iron-carbon alloy undergoes as it cools from liquid state. 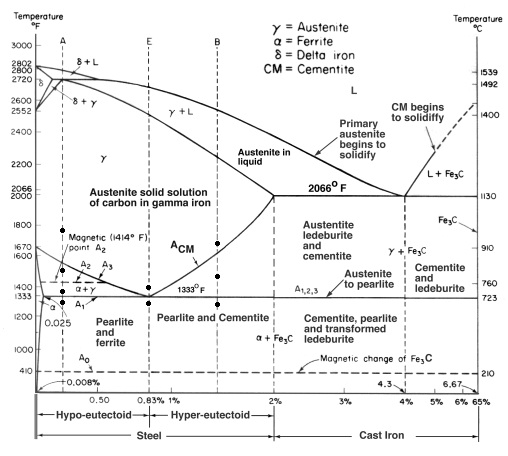 Ferrites are usually non-conductive ferrimagnetic ceramic compounds derived from iron oxides such as hematite (Fe2O3) or magnetite (Fe3O4) as well as oxides of other metals. Ferrites are, like most other ceramics, hard and brittle. In terms of their magnetic properties, the different ferrites are often classified as “soft” or “hard”, which refers to their low or high magnetic coercivity. 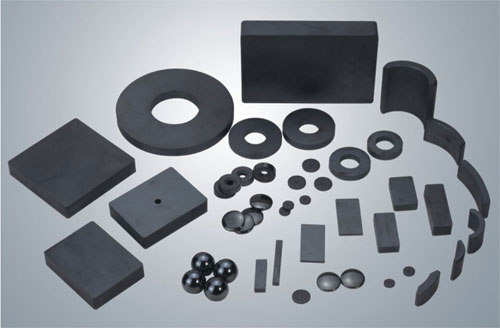 Only a very small amount of carbon can be dissolved in ferrite; the maximum solubility is about 0.02 wt% at 723 °C (1,333 °F) and 0.005% carbon at 0 °C (32 °F). This is because carbon dissolves in iron interstitially, with the carbon atoms being about twice the diameter of the interstitial “holes”, so that each carbon atom is surrounded by a strong local strain field. Hence the enthalpy of mixing is positive (unfavourable), but the contribution of entropy to the free energy of solution stabilises the structure for low carbon content. 723 °C (1,333 °F) also is the minimum temperature at which iron-carbon austenite (0.8 wt% C) is stable; at this temperature there is a eutectoid reaction between ferrite, austenite and cementite.

Ferrite cores are used in electronic inductors, transformers, and electromagnets where the high electrical resistance of the ferrite leads to very low eddy current losses. They are commonly seen as a lump in a computer cable, called a ferrite bead, which helps to prevent high frequency electrical noise (radio frequency interference) from exiting or entering the equipment. Early computer memories stored data in the residual magnetic fields of hard ferrite cores, which were assembled into arrays of core memory. Ferrite powders are used in the coatings of magnetic recording tapes. One such type of material is iron (III) oxide.

Ferrite particles are also used as a component of radar-absorbing materials or coatings used in stealth aircraft and in the absorption tiles lining the rooms used for electromagnetic compatibility measurements. Most common radio magnets, including those used in loudspeakers, are ferrite magnets. Ferrite magnets have largely displaced Alnico magnets in these applications. It is a common magnetic material for electromagnetic instrument pickups. Ferrite nanoparticles exhibit superparamagnetic properties.