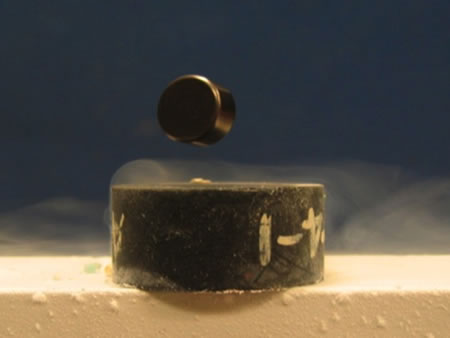 Superconductivity is a phenomenon of exactly zero electrical resistance and expulsion of magnetic fields occurring in certain materials when cooled below a characteristic critical temperature.

Superconductors, materials that have no resistance to the flow of electricity, are one of the last great frontiers of scientific discovery. Not only have the limits of superconductivity not yet been reached, but the theories that explain superconductor behavior seem to be constantly under review. In 1911 superconductivity was first observed in mercury by Dutch physicist Heike Kamerlingh Onnes of Leiden University (shown above). When he cooled it to the temperature of liquid helium, 4 degrees Kelvin (-452F, -269C), its resistance suddenly disappeared. The Kelvin scale represents an “absolute” scale of temperature. Thus, it was necessary for Onnes to come within 4 degrees of the coldest temperature that is theoretically attainable to witness the phenomenon of superconductivity. Later, in 1913, he won a Nobel Prize in physics for his research in this area.

The next great milestone in understanding how matter behaves at extreme cold temperatures occurred in 1933. German researchers Walther Meissner and Robert Ochsenfeld (above right) discovered that a superconducting material will repel a magnetic field. A magnet moving by a conductor induces currents in the conductor. This is the principle on which the electric generator operates. But, in a superconductor the induced currents exactly mirror the field that would have otherwise penetrated the superconducting material - causing the magnet to be repulsed. This phenomenon is known as strong diamagnetism and is today often referred to as the “Meissner effect” (an eponym). The Meissner effect is so strong that a magnet can actually be levitated over a superconductive material.

In subsequent decades other superconducting metals, alloys and compounds were discovered. In 1941 niobium-nitride was found to superconduct at 16 K. In 1953 vanadium-silicon displayed superconductive properties at 17.5 K. And, in 1962 scientists at Westinghouse developed the first commercial superconducting wire, an alloy of niobium and titanium (NbTi). High-energy, particle-accelerator electromagnets made of copper-clad niobium-titanium were then developed in the 1960s at the Rutherford-Appleton Laboratory in the UK, and were first employed in a superconducting accelerator at the Fermilab Tevatron in the US in 1987.

Another significant theoretical advancement came in 1962 when Brian D. Josephson (above), a graduate student at Cambridge University, predicted that electrical current would flow between 2 superconducting materials - even when they are separated by a non-superconductor or insulator. His prediction was later confirmed and won him a share of the 1973 Nobel Prize in Physics. This tunneling phenomenon is today known as the “Josephson effect” and has been applied to electronic devices such as the SQUID, an instrument capabable of detecting even the weakest magnetic fields.

The 1980′s were a decade of unrivaled discovery in the field of superconductivity. In 1964 Bill Little of Stanford University had suggested the possibility of organic (carbon-based) superconductors. The first of these theoretical superconductors was successfully synthesized in 1980 by Danish researcher Klaus Bechgaard of the University of Copenhagen and 3 French team members. (TMTSF)2PF6 had to be cooled to an incredibly cold 1.2K transition temperature (known as Tc) and subjected to high pressure to superconduct. But, its mere existence proved the possibility of “designer” molecules - molecules fashioned to perform in a predictable way.

Then, in 1986, a truly breakthrough discovery was made in the field of superconductivity. Alex Müller and Georg Bednorz (above), researchers at the IBM Research Laboratory in Rüschlikon, Switzerland, created a brittle ceramic compound that superconducted at the highest temperature then known: 30 K. What made this discovery so remarkable was that ceramics are normally insulators. They don’t conduct electricity well at all. So, researchers had not considered them as possible high-temperature superconductor candidates. The Lanthanum, Barium, Copper and Oxygen compound that Müller and Bednorz synthesized, behaved in a not-as-yet-understood way. (Original article printed in Zeitschrift für Physik Condensed Matter, April 1986.) The discovery of this first of the superconducting copper-oxides (cuprates) won the 2 men a Nobel Prize the following year. It was later found that tiny amounts of this material were actually superconducting at 58 K, due to a small amount of lead having been added as a calibration standard - making the discovery even more noteworthy.

In recent years, many discoveries regarding the novel nature of superconductivity have been made. In 1997 researchers found that at a temperature very near absolute zero an alloy of gold and indium was both a superconductor and a natural magnet. Conventional wisdom held that a material with such properties could not exist! Since then, over a half-dozen such compounds have been found. Recent years have also seen the discovery of the first high-temperature superconductor that does NOT contain any copper (2000), and the first all-metal perovskite superconductor (2001).

Also in 2001 a material that had been sitting on laboratory shelves for decades was found to be an extraordinary new superconductor. Japanese researchers measured the transition temperature of magnesium diboride at 39 Kelvin - far above the highest Tc of any of the elemental or binary alloy superconductors. While 39 K is still well below the Tc’s of the “warm” ceramic superconductors, subsequent refinements in the way MgB2 is fabricated have paved the way for its use in industrial applications. Laboratory testing has found MgB2 will outperform NbTi and Nb3Sn wires in high magnetic field applications like MRI.

Though a theory to explain high-temperature superconductivity still eludes modern science, clues occasionally appear that contribute to our understanding of the exotic nature of this phenomenon. In 2005, for example, Superconductors.ORG discovered that increasing the weight ratios of alternating planes within the layered perovskites can often increase Tc significantly. This has led to the discovery of more than 50 new high-temperature superconductors, including a candidate for a new world record.

st recent “family” of superconductors to be discovered is the “pnictides”. These iron-based superconductors were first observed by a group of Japanese researchers in 2006. Like the high-Tc copper-oxides, the exact mechanism that facilitates superconductivity in them is a mystery. However, with Tc’s over 50K, a great deal of excitement has resulted from their discovery.

Need shelving or pallet racks for your workspace?