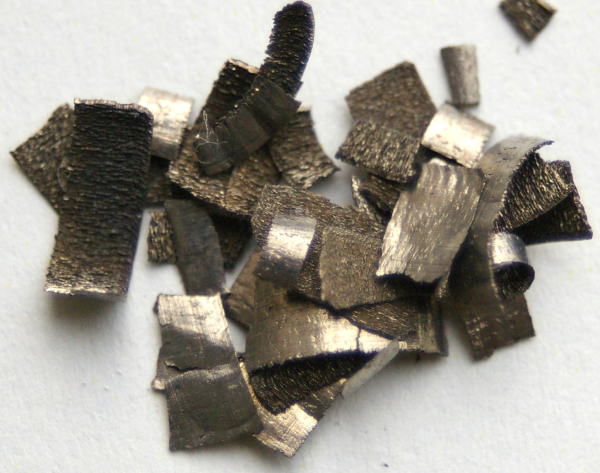 Dysprosium is a chemical element with the symbol Dy and atomic number 66. It is a rare earth element with a metallic silver luster. Dysprosium is never found in nature as a free element, though it is found in various minerals, such as xenotime. Naturally occurring dysprosium is composed of 7 isotopes, the most abundant of which is 164Dy.

Dysprosium is used for its high thermal neutron absorption

Dysprosium was first identified in 1886 by Paul Émile Lecoq de Boisbaudran, but was not isolated in pure form until the development of ion exchange techniques in the 1950s. Dysprosium is used for its high thermal neutron absorption cross-section in making control rods in nuclear reactors, for its high magnetic susceptibility to magnetization in data storage devices and as a component of Terfenol-D. Soluble dysprosium salts are mildly toxic, while the insoluble salts are considered non-toxic.

In 1878, erbium ores were found to contain the oxides of holmium and thulium. French chemist Paul Émile Lecoq de Boisbaudran, while working with holmium oxide, separated dysprosium oxide from it in Paris in 1886. His procedure for isolating the dysprosium involved dissolving dysprosium oxide in acid, then adding ammonia to precipitate the hydroxide. He was only able to isolate dysprosium from its oxide after more than 30 attempts at his procedure. Upon succeeding, he named the element dysprosium from the Greek dysprositos, meaning “hard to get”. However, the element was not isolated in relatively pure form until after the development of ion exchange techniques by Frank Spedding at Iowa State University in the early 1950s.

Dysprosium is a typical lanthanoid, which is not widely used so far. It is the best material for capturing hot neutrons, which has some applications in controlling nuclear processes.

In 1950, Glenn T. Seaborg, Albert Ghiorso, and Stanley G. Thompson bombarded 241Am with helium ions, which produced atoms with an atomic number of 97 and which closely resembled the neighboring lanthanide terbium. Because terbium was named after Ytterby, the city in which it and several other elements were discovered, this new element was named berkelium for the city in which it was synthesized. However, when the research team synthesized element 98, they could not think of a good analogy for dysprosium, and instead named the element californium in honor of the state in which it was synthesized. The research team went on to “point out that, in recognition of the fact that dysprosium is named on the basis of a Greek word meaning ‘difficult to get at,’ that the searchers for another element a century ago found it difficult to get to California.

Dysprosium is a rare earth element that has a metallic, bright silver luster. It is soft enough to be cut with a knife, and can be machined without sparking if overheating is avoided. Dysprosium’s physical characteristics can be greatly affected even by small amounts of impurities.

Dysprosium and holmium have the highest magnetic strengths of the elements, especially at low temperatures. Dysprosium has a simple ferromagnetic ordering at temperatures below 85 K. Above 85 K, it turns into an helical antiferromagnetic state in which all of the atomic moments in a particular basal plane layer are parallel, and oriented at a fixed angle to the moments of adjacent layers. This unusual antiferromagnetism transforms into a disordered (paramagnetic) state at 179 K.

Dysprosium is quite electropositive and reacts slowly with cold water and quite quickly with hot water to form dysprosium hydroxide:

Dysprosium metal vigorously reacts with all the halogens at above 200 °C:

Dysprosium halides, such as DyF3 and DyBr3, tend to take on a yellow color. Dysprosium oxide, also known as dysprosia, is a white powder that is highly magnetic, more so than iron oxide.
Dysprosium combines with various non-metals at high temperatures to form binary compounds with varying composition and oxidation states +3 and sometimes +2, such as DyN, DyP, DyH2 and DyH3; DyS, DyS2, Dy2S3 and Dy5S7; DyB2, DyB4, DyB6 and DyB12, as well as Dy3C and Dy2C3.
Dysprosium carbonate, Dy2(CO3)3, and dysprosium sulfate, Dy2(SO4)3, result from similar reactions. Most dysprosium compounds are soluble in water, though dysprosium carbonate tetrahydrate (Dy2(CO3)3·4H2O) and dysprosium oxalate decahydrate (Dy2(C2O4)3·10H2O) are both insoluble in water.

Hard disk - You are almost certainly using a device that depends on dysprosium right now.

Dysprosium is never encountered as a free element, but is found in many minerals, including xenotime, fergusonite, gadolinite, euxenite, polycrase, blomstrandine, monazite and bastnäsite; often with erbium and holmium or other rare earth elements. Currently, most dysprosium is being obtained from the ion-adsorption clay ores of southern China. In the high-yttrium version of these, dysprosium happens to be the most abundant of the heavy lanthanides, comprising up to 7–8% of the concentrate (as compared to about 65% for yttrium). The concentration of Dy in the Earth crust is about 5.2 mg/kg and in sea water 0.9 ng/L.

The metal is obtained as a by-product in the commercial extraction of yttrium. In isolating dysprosium, most of the unwanted metals can be removed magnetically or by a flotation process. Dysprosium can then be separated from other rare earth metals by an ion exchange displacement process. The resulting dysprosium ions can then react with either fluorine or chlorine to form dysprosium fluoride, DyF3, or dysprosium chloride, DyCl3. These compounds can be reduced using either calcium or lithium metals in the following reactions :
3 Ca + 2 DyF3 — 2 Dy + 3 CaF2
3 Li + DyCl3 — Dy + 3 LiCl
The components are placed in a tantalum crucible and fired in a helium atmosphere. As the reaction progresses, the resulting halide compounds and molten dysprosium separate due to differences in density. When the mixture cools, the dysprosium can be cut away from the impurities.
About 100 tonnes of dysprosium are produced worldwide each year, with 99% of that total produced in China Dysprosium prices have climbed nearly twentyfold, from $7 per pound in 2003, to $130 a pound in late 2010.

Dysprosium is used, in conjunction with vanadium and other elements, in making laser materials. Because of dysprosium’s high thermal neutron absorption cross-section, dysprosium oxide-nickel cermets are used in neutron-absorbing control rods in nuclear reactors. Dysprosium-cadmium chalcogenides are sources of infrared radiation which is useful for studying chemical reactions. Because dysprosium and its compounds are highly susceptible to magnetization, they are employed in various data storage applications, such as in hard disks.

Dysprosium Is Attracted to a Strong Magnet

Neodymium-iron-boron magnets can have up to 6% of the neodymium substituted with dysprosium to raise the coercivity for demanding applications such as drive motors for hybrid electric vehicles. This substitution would require up to 100 grams of dysprosium per hybrid car produced. Based on Toyota’s projected 2 million units per year, the use of dysprosium in applications such as this would quickly exhaust the available supply of the metal. The dysprosium substitution may also be useful in other applications, as it improves the corrosion resistance of the magnets.