A forge is a hearth used for forging. The term “forge” can also refer to the workplace of a smith or a blacksmith, although the term smithy is then more commonly used. The basic smithy contains a forge, also known as a hearth, for heating metals. The forge heats the workpiece to a malleable temperature (a temperature where the metal becomes easier to shape) or to the point where work hardening no longer occurs. 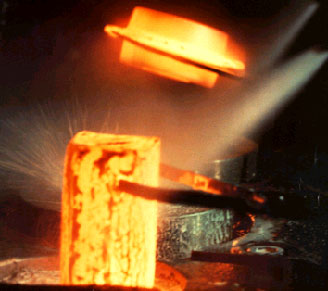 Forging is the process by which metal is heated and is shaped by plastic deformation by suitably applying compressive force. Usually the compressive force is in the form of hammer blows using a power hammer or a press. Forging refines the grain structure and improves physical properties of the metal. With proper design, the grain flow can be oriented in the direction of principal stresses encountered in actual use. 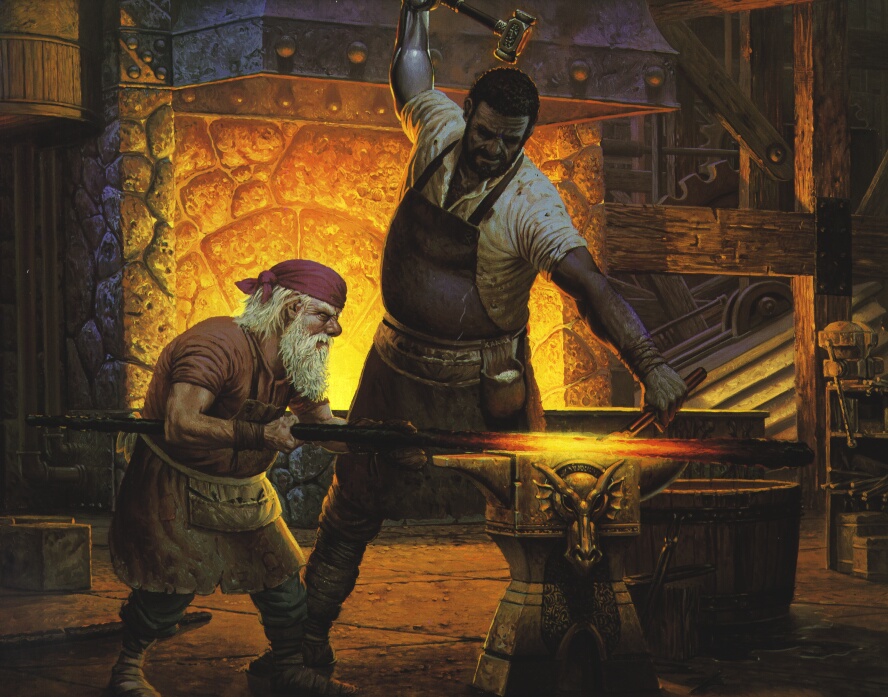 Grain flow is the direction of the pattern that the crystals take during plastic deformation. Physical properties (such as strength, ductility and toughness) are much better in a forging than in the base metal, which has, crystals randomly oriented. Forgings are consistent from piece to piece, without any of the porosity, voids, inclusions and other defects. Thus, finishing operations such as machining do not expose voids, because there aren’t any. Also coating operations such as plating or painting are straightforward due to a good surface, which needs very little preparation. 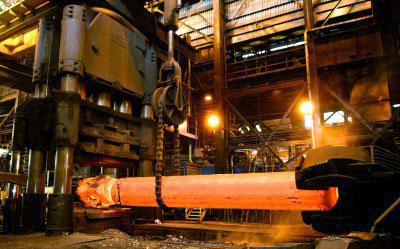 Manufacturers now use many different techniques to forge metal. Four of the most common include: 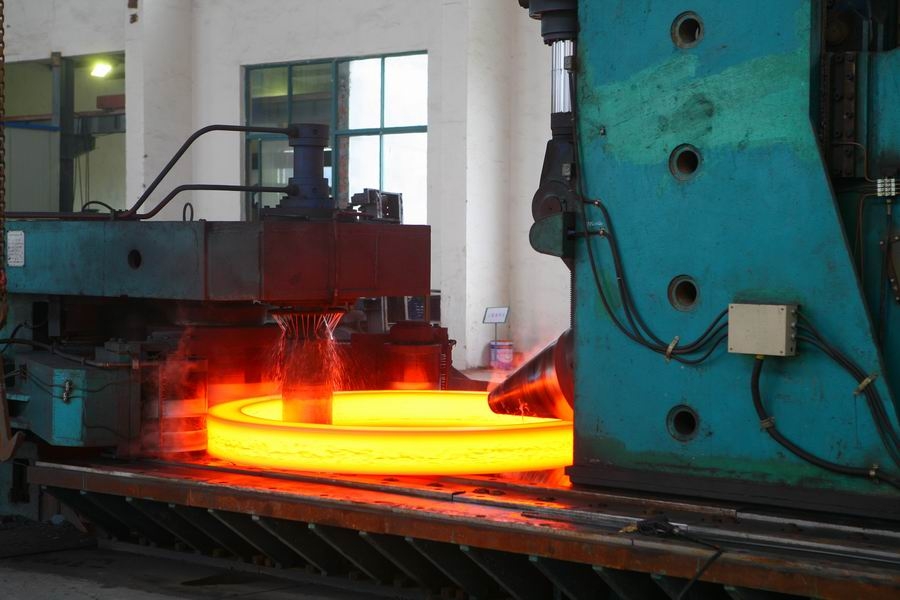 Drop forging is a process used to shape metal into complex shapes by dropping heated metal into a punch and die which compresses to gradually change the shape of the metal.The workpiece is placed into a die and punch, then the impact of a ram on the punch causes the heated material, which is very malleable, to conform to the shape of the punch and die cavities. Typically only one ram is needed to completely form the part. The extra space between the die and punch is called the flash. It acts as a relief valve for the extreme pressure produced by the closing of the die halves but is eventually trimmed off of the finished part. 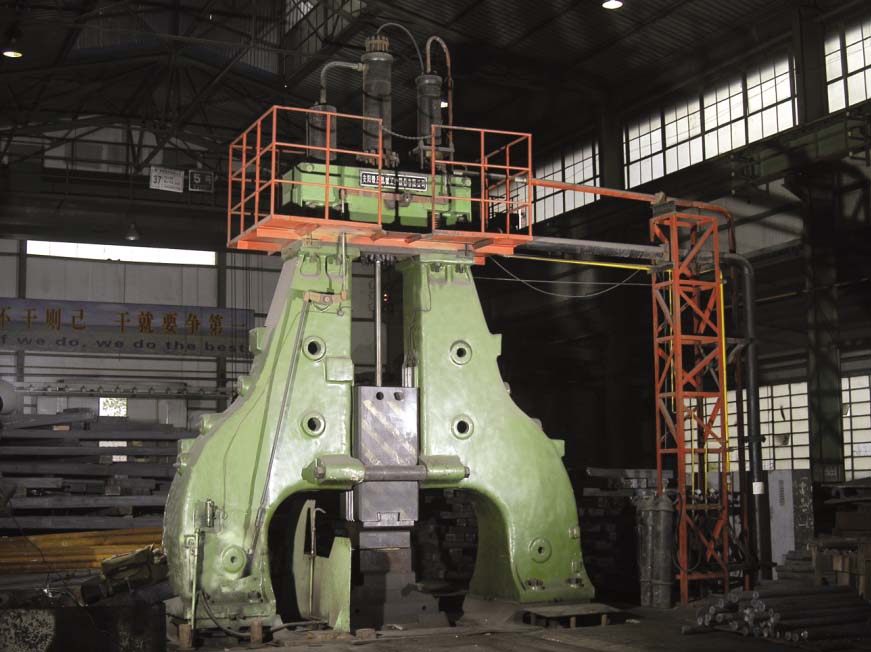 The equipment used in the drop forming process is commonly known as a power or drop hammer. These may be powered by air, hydraulics, or mechanics. Depending on how the machine is powered, the mass of the ram, and the drop height, the striking force can be anywhere from 11,000 to 425,000 pounds. The tools that are used, dies and punches, come in many different shapes and sizes, as well as materials. Examples of these shapes are flat and v-shaped which are used for open-die forging, and single or multiple-impression dies used for closed die-forging. The designs for the dies have many aspects to them that must be considered.

They all must be properly aligned, they must be designed so the metal and the flash will flow properly and fill all the grooves, and special considerations must be made for supporting webs and ribs and the parting line location. The materials must also be selected carefully. Some factors that go into the material selection are cost, their ability to harden, their ability to withstand high pressures, hot abrasion, heat cracking, and other such things. The most common materials used for the tools are carbon steel and, in some cases, nickel based alloys.

Cold forging deforms metal while it is below its recrystallization point. Cold forging is generally preferred when the metal is already a soft metal, like aluminum. This process is usually less expensive than hot forging and the end product requires little, if any, finishing work. Sometimes, when aluminum is cold forged into a desired shape, it is heat treated to strengthen the piece. This is called “tempering.”

Manufacturers may choose cold forging over hot forging for a number of reasons—since cold forged parts require very little or no finishing work, that step of the fabrication process is often dispensable, which saves money. Cold forging is also less susceptible to contamination problems, and the final component features a better overall surface finish.

Other benefits of cold forging include:

Some possible disadvantages include: 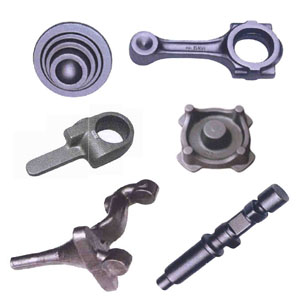 Warm forging has a number of cost-saving advantages which underscore its increasing use as a manufacturing method. The temperature range for the warm forging of steel runs from above room temperature to below the recrystallization temperature, or from about 800 to 1,800 degrees Fahrenheit. However, the narrower range of from 1,000 to 1,330 degrees Fahrenheit is emerging as the range of perhaps the greatest commercial potential for warm forging. Compared with cold forging, warm forging has the potential advantages of reduced tooling loads, reduced forging press loads, increased steel ductility, elimination of need to anneal prior to forging, and favorable as-forged properties that can eliminate heat treatment. 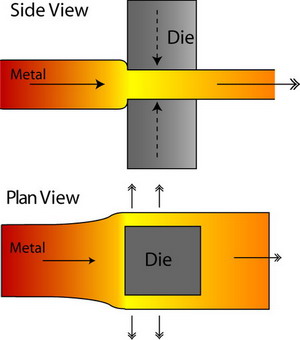 Hot forging is the plastic deformation of metal at a temperature and strain rate such that recrystallization occurs simultaneously with deformation, thus avoiding strain hardening. For this to occur, high workpiece temperature (matching the metal’s recrystallization temperature) must be attained throughout the process. A form of hot forging is isothermal forging, where materials and dies are heated to the same temperature. In nearly all cases, isothermal forging is conducted on superalloys in a vacuum or highly controlled atmosphere to prevent oxidation.When a piece of metal is hot forged it must be heated significantly.

The average temperatures necessary for hot forging are:

Traditionally, manufacturers choose hot forging for the fabrication of parts that have a greater influence in the technical arena. Hot forging is also recommended for the deformation of metal that features a high formability ratio. Other considerations for hot forging include:

Possible disadvantages of hot forging include:

During hot forging, the temperature reaches above the recrystallization point of the metal. This kind of extreme heat is necessary in avoiding strain hardening of the metal during deformation. In order to prevent the oxidation of certain metals, like super alloys, a type of hot forging called isothermal forging is a good choice. In isothermal forging, the metal deformation occurs within a highly controlled atmosphere, similar to that of a vacuum.