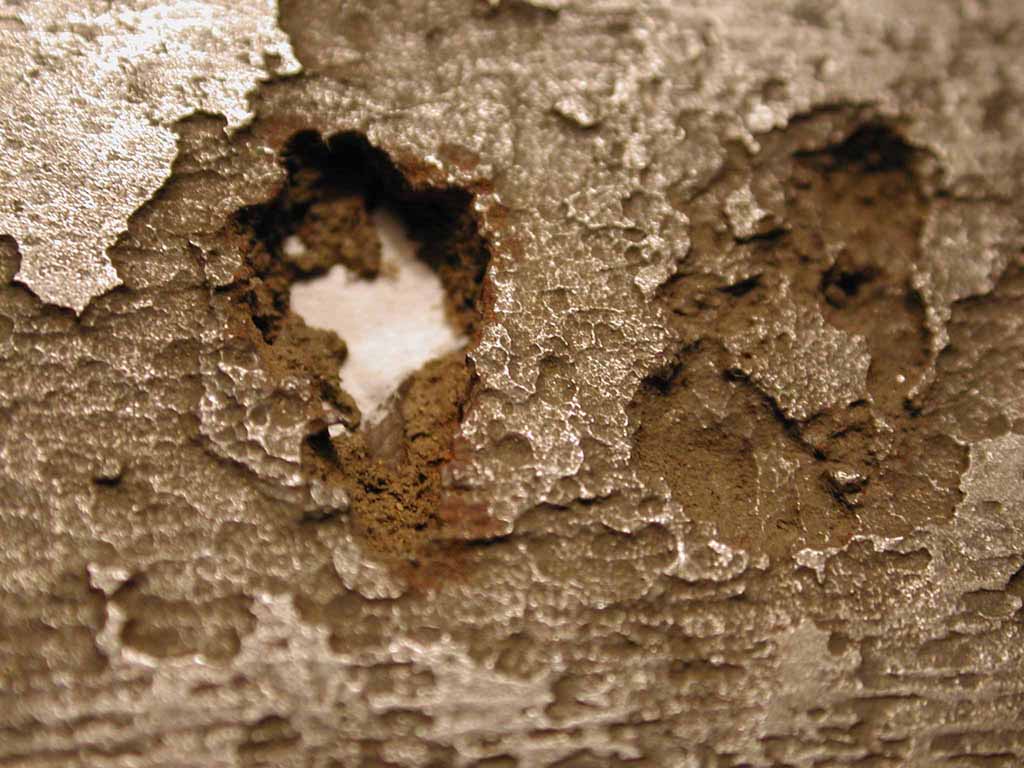 Formation of an oxide of iron due to oxidation of the iron atoms in solid solution is a well-known example of electrochemical corrosion, commonly known as rusting. This type of damage typically produces oxide(s) and/or salt(s) of the original metal. Corrosion can also refer to other materials than metals, such as ceramics or polymers, although in this context, the term degradation is more common. 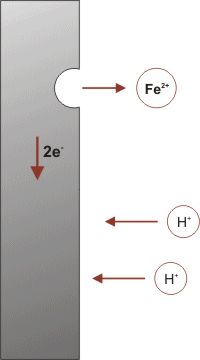 The corrosion process (anodic reaction) of the metal dissolving as ions generates some electrons.  Source : https://www.corrosion-doctors.org/

Corrosion is the primary means by which metals deteriorate. Most metals corrode on contact with water (and moisture in the air), acids, bases, salts, oils, aggressive metal polishes, and other solid and liquid chemicals. Metals will also corrode when exposed to gaseous materials like acid vapors, formaldehyde gas, ammonia gas, and sulfur containing gases. Corrosion specifically refers to any process involving the deterioration or degradation of metal components. The best known case is that of the rusting of steel. Corrosion processes are usually electrochemical in nature, having the essential features of a battery. 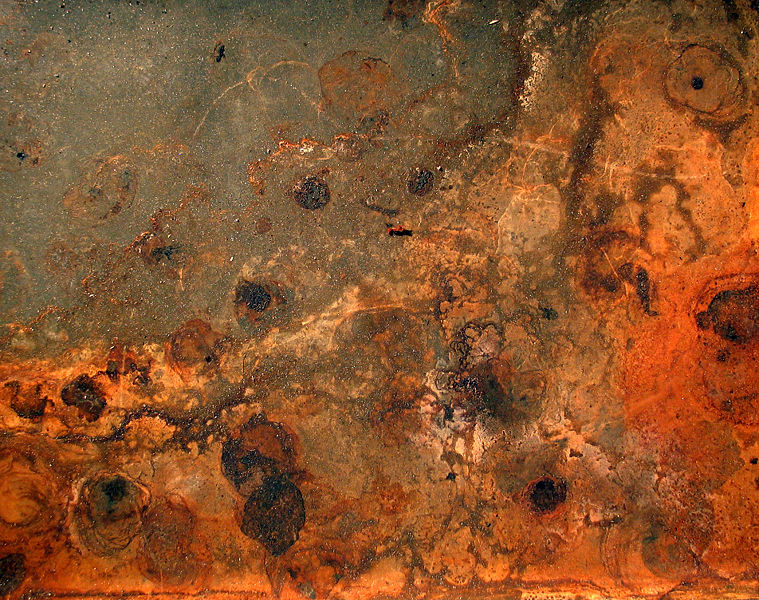 Rust, the most familiar example of corrosion.

When metal atoms are exposed to an environment containing water molecules they can give up electrons, becoming themselves positively charged ions, provided an electrical circuit can be completed. This effect can be concentrated locally to form a pit or, sometimes a crack, or it can extend across a wide area to produce general wastage. 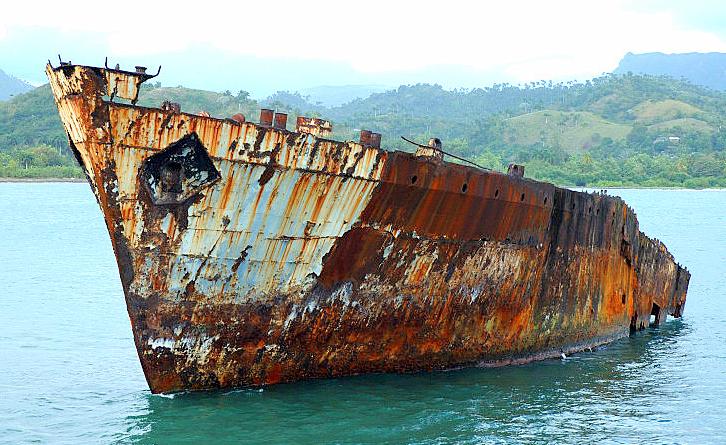 Localized corrosion that leads to pitting may provide sites for fatigue initiation and, additionally, corrosive agents like seawater may lead to greatly enhanced growth of the fatigue crack. Pitting corrosion also occurs much faster in areas where microstructural changes have occurred due to welding operations. 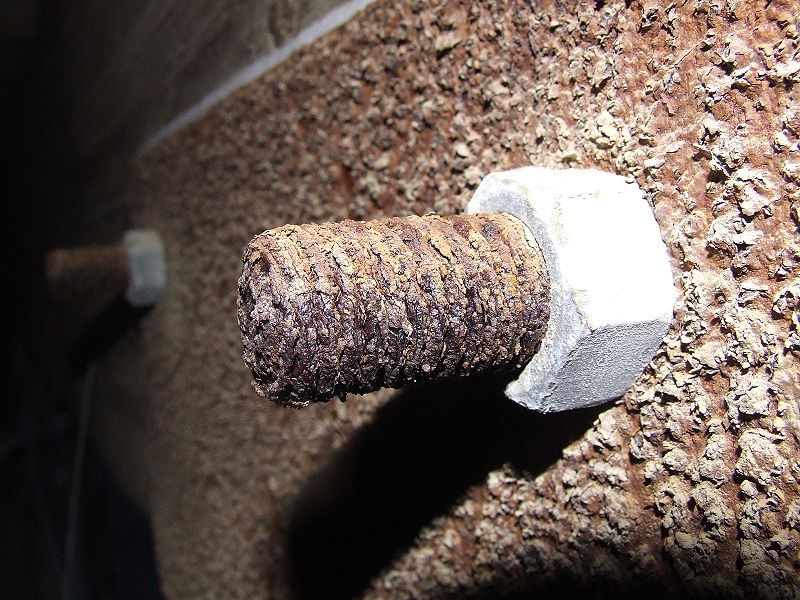 Corrosion is possible only as long as certain metals have impurities, oxygen and moisture.  The corrosion of metals such as iron is an electrochemical process.  Very pure samples of iron seem to resist corrosion.  In contrast, when a piece of iron containing specks of impurities such as copper are exposed to moist air, the iron becomes pitted with rust spots.  Iron rust is a reddish-brown hydrated compound of varying composition have the formula Fe(OH)3.x H2O.  Therefore, rust spots indicate the location at which pure iron has been oxidized.

The electrochemical theory of corrosion  is supported by the observation that iron exposed to perfectly dry air does not corrode.  Three half-cell reactions which would present possible reactions in this complex mechanism are:

Further oxidation of Fe(OH)2 yields Fe(OH)3.  Examination of the equation shows that three factors influence the formation of corrosion.   These are the concentration of oxygen, the acidity, and the presence of oxygen.  There is in fact a fourth factor, the quality of the iron metal itself.
Corrosion occurs in the presence of moisture. For example when iron is exposed to moist air, it reacts with oxygen to form rust :

The amount of water complexed with the iron (III) oxide (ferric oxide) varies as indicated by the letter “X”. The amount of water present also determines the color of rust, which may vary from black to yellow to orange brown. The formation of rust is a very complex process which is thought to begin with the oxidation of iron to ferrous (iron “+2″) ions.

Both water and oxygen are required for the next sequence of reactions. The iron (+2) ions are further oxidized to form ferric ions (iron “+3″) ions.

the electrons provided from both oxidation steps are used to reduce oxygen as shown.

The ferric ions then combine with oxygen to form ferric oxide [iron (III) oxide] which is then hydrated with varying amounts of water. The overall equation for the rust formation may be written as :

The formation of rust can occur at some distance away from the actual pitting or erosion of iron as illustrated below. This is possible because the electrons produced via the initial oxidation of iron can be conducted through the metal and the iron ions can diffuse through the water layer to another point on the metal surface where oxygen is available. This process results in an electrochemical cell in which iron serves as the anode, oxygen gas as the cathode, and the aqueous solution of ions serving as a “salt bridge” as shown below.

When metal atoms are exposed to an environment containing water molecules they can give up electrons, becoming themselves positively charged ions, provided an electrical circuit can be completed. This effect can be concentrated locally to form a pit or, sometimes a crack, or it can extend across a wide area to produce general wastage. 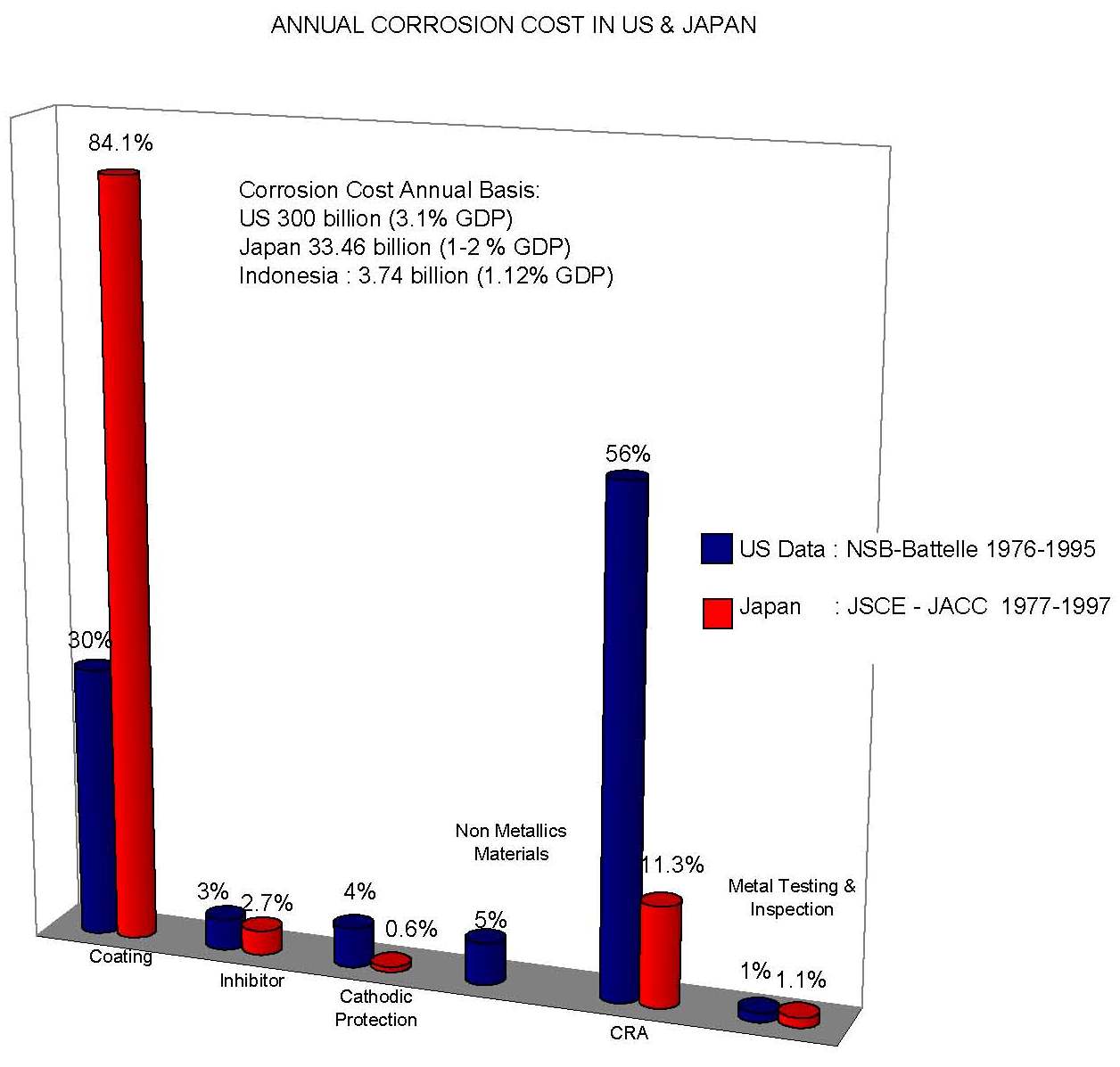 The economy of corrosion in was studied by Battelle (1995) and CC Technologies (2002) in United States and in Japan by Society of Corrosion Engineering and Japan Association of Corrosion Control (1997). Higher cost contribution from oil and gas sector is showed in US case above. 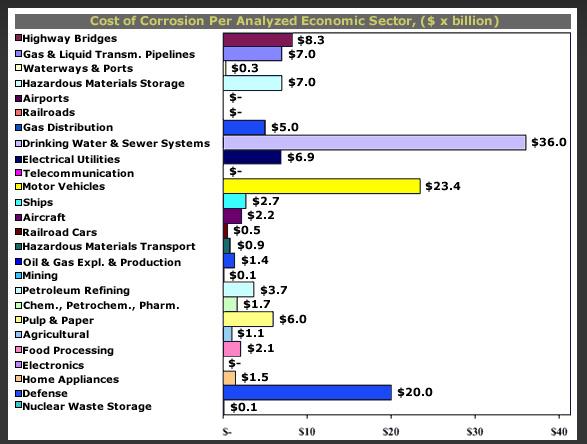 It is known that the corrosion of metallic structures has a significant impact on the U.S. economy, including infrastructure, transportation, utilities, production and manufacturing, and government. A 1975-benchmark study by Battelle-NBS calculated the cost of corrosion to be $70 billion per year, which was 4.2 percent of the nation’s gross national product (GNP). Other studies, both in the United States and abroad have addressed the cost of corrosion as well.