A metal is a chemical element that is a good conductor of both electricity and heat and forms cations and ionic bonds with non-metals. In chemistry, a metal is an element, compound, or alloy characterized by high electrical conductivity. In a metal, atoms readily lose electrons to form positive ions (cations). Those ions are surrounded by delocalized electrons, which are responsible for the conductivity. The solid thus produced is held by electrostatic interactions between the ions and the electron cloud, which are called metallic bonds.

A metal is defined as any element that loses its outer shell electrons to become stable. Since neutral atoms have equal numbers of electrons (- charge) and protons (+ charge). Therefore when a metal atom loses electrons it becomes positively charged. This charged particle is called an ion

Metals are shiny solids are room temperature (except mercury, which is a shiny liquid element), with characteristic high melting points and densities. Many of the properties of metals, including large atomic radius, low ionization energy, and low electronegativity, are due to the fact that the electrons in the valence shell of a metal atoms can be removed easily. One characteristic of metals is their ability to be deformed without breaking. Malleability is the ability of a metal to be hammered into shapes. Ductility is the ability of a metal to be drawn into wire. Because the valence electrons can move freely, metals are good heat conductors and electrical conductors.

Metals are sometimes described as an arrangement of positive ions surrounded by a sea of delocalized electrons. Metals occupy the bulk of the periodic table, while non-metallic elements can only be found on the right-hand-side of the Periodic Table of the Elements. A diagonal line, drawn from boron (B) to polonium (Po), separates the metals from the nonmetals. Elements to the lower left of this division line are called metals, while elements to the upper right of the division line are called nonmetals.

An alternative definition of metal refers to the band theory. If one fills the energy bands of a material with available electrons and ends up with a top band partly filled then the material is a metal. The Sun and the Milky Way Galaxy are composed of roughly 74% hydrogen, 24% helium, and 2% “metals” (the rest of the elements; atomic numbers 3–118) by mass. The concept of a metal in the usual chemical sense is irrelevant in stars, as the chemical bonds that give elements their properties cannot exist at stellar temperatures.

Metals in general have high electrical conductivity which depends on their valency of ions, thermal conductivity, luster and density, and the ability to be deformed under stress without cleaving. While there are several metals that have low density, hardness, and melting points, these (the alkali and alkaline earth metals) are extremely reactive, and are rarely encountered in their elemental, metallic form. Optically speaking, metals are opaque, shiny and lustrous. The majority of metals have higher densities than the majority of nonmetals. Nonetheless, there is wide variation in the densities of metals, lithium is the least dense solid element and osmium is the densest. The metals of groups I A and II A are referred to as the light metals because they are exceptions to this generalization.

The high density of most metals is due to the tightly packed crystal lattice of the metallic structure. The strength of metallic bonds for different metals reaches a maximum around the center of the transition metal series, as those elements have large amounts of delocalized electrons in tight binding type metallic bonds. Most non-ferrous metals can be recycled many times during their life cycle.

The electrical and thermal conductivity of metals originate from the fact that in the metallic bond, the outer electrons of the metal atoms form a gas of nearly free electrons, moving as an electron gas in a background of positive charge formed by the ion cores. Good mathematical predictions for electrical conductivity, as well as the electrons’ contribution to the heat capacity and heat conductivity of metals can be calculated from the free electron model, which does not take the detailed structure of the ion lattice into account.

An alloy is a mixture of two or more elements in solid solution in which the major component is a metal. Most pure metals are either too soft, brittle or chemically reactive for practical use. Combining different ratios of metals as alloys modifies the properties of pure metals to produce desirable characteristics. Of all the metallic alloys in use today, the alloys of iron (steel, stainless steel, cast iron, tool steel, alloy steel) make up the largest proportion both by quantity and commercial value. Iron alloyed with various proportions of carbon gives low, mid and high carbon steels, with increasing carbon levels reducing ductility and toughness. Other significant metallic alloys are those of aluminium, titanium, copper and magnesium. The alloys of aluminium, titanium and magnesium are valued for their high strength-to-weight ratios; magnesium can also provide electromagnetic shielding. 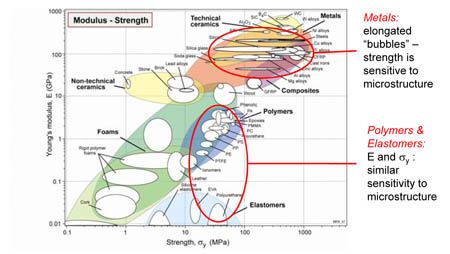 Alloys specially designed for highly demanding applications, such as jet engines, may contain more than ten elements.Chemically, the precious metals are less reactive than most elements, have high luster and high electrical conductivity. Historically, precious metals were important as currency, but are now regarded mainly as investment and industrial commodities. The best-known precious metals are gold and silver. Other precious metals include the platinum group metals: ruthenium, rhodium, palladium, osmium, iridium, and platinum, of which platinum is the most widely traded. Silver is substantially less expensive than these metals, but is often traditionally considered a precious metal for its role in coinage and jewelry.

This section is devoted primarily to the terms used in describing various properties and characteristics of metals in general. Of primary concern in aircraft maintenance are such general properties of metals and their alloys as hardness, brittleness, malleability, ductility, elasticity, toughness, density, fusibility, conductivity, and contraction and expansion. You must know the definition of the terms included here because they form the basis for further discussion of aircraft metals.

Hardness refers to the ability of a metal to resist abrasion, penetration, cutting action, or permanent distortion. Hardness may be increased by working the metal and, in the case of steel and certain titanium and aluminum alloys, by heat treatment and cold-working (discussed later). Structural parts are often formed from metals in their soft state and then heat treated to harden them so that the finished shape will be retained. Hardness and strength are closely associated properties of all metals. If you have a pure piece of metal, you can control the size of the grains by heat treatment or by working the metal.

Heating a metal tends to shake the atoms into a more regular arrangement - decreasing the number of grain boundaries, and so making the metal softer. Banging the metal around when it is cold tends to produce lots of small grains. Cold working therefore makes a metal harder. To restore its workability, you would need to reheat it.

You can also break up the regular arrangement of the atoms by inserting atoms of a slightly different size into the structure. Alloys such as brass (a mixture of copper and zinc) are harder than the original metals because the irregularity in the structure helps to stop rows of atoms from slipping over each other.

Brittleness is the property of a metal that allows little bending or deformation without shattering. In other words, a brittle metal is apt to break or crack without change of shape. Because structural metals are often subjected to shock loads, brittleness is not a very desirable property. Cast iron, cast aluminum, and very hard steel are brittle metals.

A metal that can be hammered, rolled, or pressed into various shapes without cracking or breaking or other detrimental effects is said to be malleable. This property is necessary in sheet metal that is to be worked into curved shapes such as cowlings, fairings, and wing tips. Copper is one example of a malleable metal.

Ductility is the property of a metal that permits it to be permanently drawn, bent, or twisted into various shapes without breaking. This property is essential for metals used in making wire and tubing. Ductile metals are greatly preferred for aircraft use because of their ease of forming and resistance to failure under shock loads. For this reason, aluminum alloys are used for cowl rings, fuselage and wing skin, and formed or extruded parts, such as ribs, spars, and bulkheads. Chrome-molybdenum steel is also easily formed into desired shapes. Ductility is similar to malleability.

Elasticity is that property that enables a metal to return to its original shape when the force that causes the change of shape is removed. This property is extremely valuable, because it would be highly undesirable to have a part permanently distorted after an applied load was removed. Each metal has a point known as the elastic limit, beyond which it cannot be loaded without causing permanent distortion. When metal is loaded beyond its elastic limit and permanent distortion does result, it is referred to as strained. In aircraft construction, members and parts are so designed that the maximum loads to which they are subjected will never stress them beyond their elastic limit.

A material that possesses toughness will withstand tearing or shearing and may be stretched or otherwise deformed without breaking. Toughness is a desirable property in aircraft metals.

Fusibility is defined as the ability of a metal to become liquid by the application of heat. Metals are fused in welding. Steels fuse at approximately 2,500°F, and aluminum alloys at approximately 1, 110°F.

Conductivity is the property that enables a metal to carry heat or electricity. The heat conductivity of a metal is especially important in welding, because it governs the amount of heat that will be required for proper fusion. Conductivity of the metal, to a certain extent, determines the type of jig to be used to control expansion and contraction. In aircraft, electrical conductivity must also be considered in conjunction with bonding, which is used to eliminate radio interference. Metals vary in their capacity to conduct heat. Copper, for instance, has a relatively high rate of heat conductivity and is a good electrical conductor.

The free electrons can move, and so when electrons are pushed in at one end of a piece of metal others come out at the other end. There are no empty spaces in the metal. The easiest way to visualise this is as a hose filled with marbles when one goes in another comes out immediately at the other end. Thus current can flow through metals. It is this presence of available electrons in metals that enable them to be used to generate current in batteries.