Nanorobotics is the emerging technology field of creating machines or robots whose components are at or close to the microscopic scale of a nanometer. More specifically, nanorobotics refers to the nanotechnology engineering discipline of designing and building nanorobots, with devices ranging in size from 0.1-10 micrometers and constructed of nanoscale or molecular components. The names nanobots, nanoids, nanites, nanomachines or nanomites have also been used to describe these devices currently under research and development. 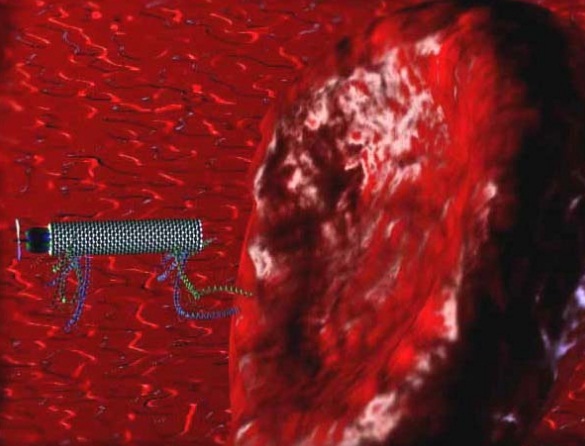 By scientists at Rutgers University believe that nanorobots will be injected into the bloodstream and administer a drug directly to an infected cell. This nanorobot has a carbon nanotube body, a biomolecular motor that propels it and peptide limbs to orient itself. Because it is composed of biological elements such as DNA and proteins, it will be easily removed from the body.(Image courtesy of the Bio-Nano Robotics team at Rutgers University: Constantinos Mavroidis, Martin L. Yarmush, Atul Dubey, Angela Thornton, Kevin Nikitczuk, Silvina Tomassone, Fotios Papadimitrakopoulos and Bernie Yurke.)

Nanorobots are theoretical microscopic devices measured on the scale of nanometers (1nm equals one millionth of 1 millimeter). When fully realized from the hypothetical stage, they would work at the atomic, molecular and cellular level to perform tasks in both the medical and industrial fields that have heretofore been the stuff of science fiction.