What is Damascus Steel ?

Damascus steel is one of the greatest wonders of the ancient world. Invented more than 1,500 years ago, forgotten, and then rediscovered, it’s a type of steel known for its strength, rigidity and durability. The blacksmithing techniques required to create and work Damascus steel are considerable. It’s made by sandwiching together up to six different types of steel, heating them in a forge, and working them together on an anvil, folding them over and over to create a single metal blank containing a stratified layer of different metals.

As this is a labor intensive process, a good knife made from Damascus steel may cost in excess of 1,000 dollars. The making of such a knife is the ultimate challenge in a blacksmith’s ability to work metal. Several theories on the origins of the term “Damascus steel” exist, but none of them may be confirmed definitively.

Damascus may refer to:

Historians such as Hobson, Sinopoli, and Juleff state that the material used to produce the original damascus was ingots of Wootz steel, which originated in India and Sri Lanka and later spread to Persia. From the 3rd century to the 17th century, India was shipping steel ingots to the Middle East for use in Damascus steel. Today, the term is used to describe steel that mimics the appearance and performance of Damascus steel, usually that which is produced by either crucible forging or pattern welding. 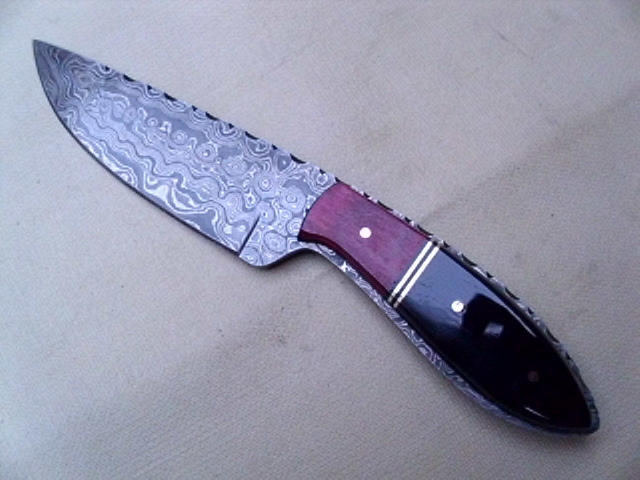 The original method of producing Damascus steel is not known. Whatever the lost methods of making Damascus steel, of ore refinement and forging, they harnessed impurities and changes at the molecular level. Although modern steel outperforms these swords[citation needed], the microscopic chemical reactions may have made the blades extraordinary for their time. The process was lost to metalsmiths after production of the patterned swords gradually declined and eventually ceased circa 1750. The raw material for producing the original Damascus steel is believed to be wootz imported from India.

The discovery of carbon nanotubes in the Damascus steel’s composition supports this hypothesis, since the precipitation of carbon nanotubes likely resulted from a specific process that may be difficult to replicate should the production technique or raw materials used be significantly altered. Since pattern welding was a prominent technique used for swords and knives, and produced surface patterns similar to those found on Damascus blades, a belief existed that Damascus blades were made using a pattern welding technique.

Pattern-welded steel has been referred to as “Damascus steel”, since 1973 when Bladesmith William F. Moran unveiled his “Damascus knives” at the Knifemakers’ Guild Show. This “Modern Damascus” is made from several types of steel and iron slices, which are then welded together to form a billet. The belief that Damascus steel was pattern welded was challenged in the 1990s when J. D. Verhoeven and A. H. Pendray published an article on their experiments on reproducing the elemental, structural, and visual characteristics of Damascus steel.

Although such material could be worked at low temperatures to produce the striated Damascene pattern of intermixed ferrite and cementite bands in a manner identical to pattern-welded Damascus steel, any heat treatment sufficient to dissolve the carbides would destroy the pattern permanently. However, Verhoeven and Pendray discovered that in samples of true Damascus steel, the Damascene pattern could be recovered by aging at a moderate temperature.

Most modern steels intended to mimic the appearance of original Damascus are a lamination of folded steels selected with cosmetic qualities, with grinding and polishing specifically to expose the layers. A limited amount of steel makers attempt to recreate the original Damascus steel by using ingots produced through wootz methods.

Several steelmaking techniques, other than the original wootz steel (such as Damascened steel and sometimes watered steel), can result in patterned surfaces, though not for the same reasons, and have been sold as Damascus steel. Historically authentic Damascus steel is processed from wootz steel or equivalent. Modern materials intended to mimic the appearance of Damascus steel are usually made by pattern welding two tool steels, one with high nickel content, appearing bright, the other appearing more grey so that alternating steels produce light-dark stripes.

Treating or pickling the steel with dilute acid after polishing enhances the pattern by darkening one of the steels more than the other. Folding and twisting while hammer forging the steel controls the striped pattern, and the method used is often trademarked. Experienced bladesmiths can manipulate the layered patterns to mimic the designs found in the surface of the medieval Damascus steel.

Carbon nanotubes and nanowires were found in a sample of a 17th century sword forged from Damascus steel. Peter Paufler, a member of the Dresden team, says that these nanostructures are a result of the forging process.Prior to the early 20th century, all shotgun barrels were forged by heating narrow strips of iron and steel and shaping them around a mandrel. Because of the appearance to Damascus steel, higher-end barrels were made by Belgian and British gun makers. Current gun manufacturers such as Caspian Arms make slide assemblies and small parts such as triggers and safeties for Colt M1911 pistols from powdered Swedish steel resulting in a swirling two-toned effect; these parts are often referred to as “Stainless Damascus”.