When a piece of a magnetic material is made smaller and smaller, is acquires simpler magnetic domain structure since less domain walls are needed in order to minimize the stray field energy. The extreme limit is represented by single domain particles. Magnetic nanoparticles are useful for a wide range of applications from data storage to medicinal imaging. 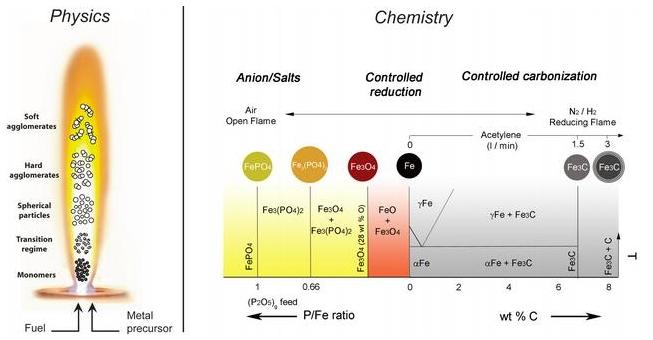 Various flame spray conditions and their impact on the resulting nanoparticles

High capacity information storage, for instance, requires smaller particle size that decreasing the particle size lowers the anisotropy energy responsible for holding the magnetic moments along certain directions and it becomes comparable to the thermal energy. Thermal fluctuations randomize magentic moments (unless external magnetic field is applied), which is the essence of the so-called superparamagnetic behavior. Core/shell structured magnetic systems have an extra source of anisotropy that increases the stability of magnetic moments up to certain temperature called blocking temperature.

Magnetic nanoparticles are a class of nanoparticle which can be manipulated using magnetic field. Such particles commonly consist of magnetic elements such as iron, nickel and cobalt and their chemical compounds. The magnetic nanoparticles have been the focus of much research recently because they possess attractive properties which could see potential use in catalysis, biomedicine, magnetic resonance imaging,magnetic particle imaging, data storage and environmental remediation. 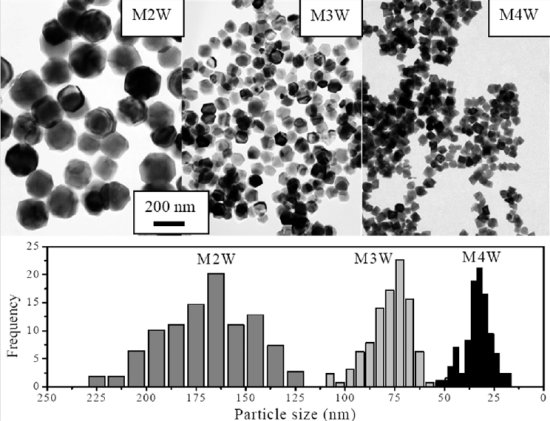 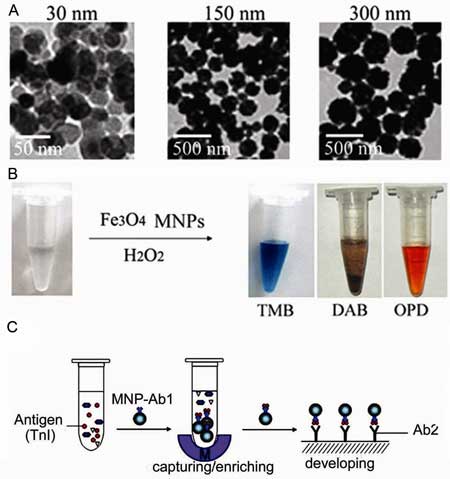 Thus, for applications in angiography and tumour permeability, ultra-small superparamagnetic iron oxide particles  are preferred. For hyperthermia treatment, particles with sizes around the monodomain–multidomain transition, i.e. particles below 50 nm in diameter, have been found to produce the maximum specific absorption rate (SAR). It has been reported that the SAR of 35 nm magnetite particles is twice that of 10nbsp;nm particles. 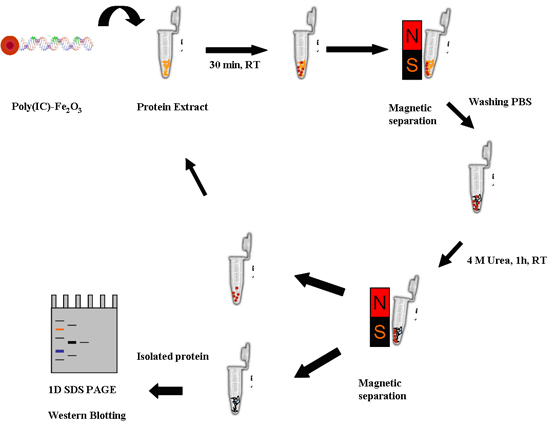 Functionalized Magnetic Nanoparticles at Protein Separation  - Here polymer coated superparamagnetic gamma-Fe2O3 nanoparticles were derivatized with a synthetic double-stranded RNA [poly(IC)], a known allosteric activator of the latent (2-5)A synthetase, to separate a single 35 kDa protein from a crude extract which cross reacted with antibodies, raised against the sponge enzyme.

Specifically, the first section of this review describes synthetic routes producing equiaxial magnetic iron oxide particles below 10 nm  which exhibit superparamagnetism combined with surface effects; those between 10 and 30 nm  which exhibit superparamagnetic effects and some blocking, above 30 nm which are at the monodomain–multidomain boundary and also methods that produce anisometric nanoparticles. 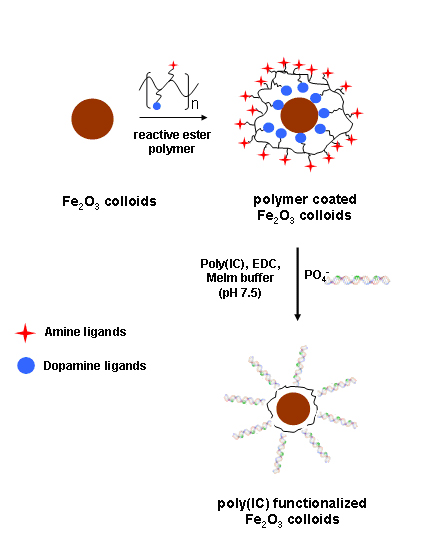 Magnetic nanoparticles can be conjugated with carbohydrates and used for detection of bacteria. Magnetic immunoassay (MIA) is a novel type of diagnostic immunoassay utilizing magnetic beads as labels in lieu of conventional, enzymes , radioisotopes or fluorescent moieties. The presence of magnetic beads is then detected by a magnetic reader (magnetometer) which measures the magnetic field change induced by the beads. Magnetic nanoparticles are being used or have the potential use as a catalyst or catalyst supports.

Magnetic nanoparticles of, for example, magnetite or maghemite (common iron oxide materials used in different biomedical applications or in data storage systems) with diameters smaller than about 50 nm are singledomains. Magnetic nanoparticles can be divided into particles that are superparamagnetic or thermally blocked. Superparamagnetic particles have magnetic relaxation times that are shorter compared to the typical time scale of the measurement.

Thermally blocked particles have magnetic relaxation times that are larger when compared with a typical time scale of measurement being used to study the particle system. If the nanoparticles are placed in a solid matrix, the thermally blocked nanoparticles will exhibit both remanence and coercivity while the superparamagnetic particles will not show any remanence and coercivity. Coercivity is the field that brings the magnetization to zero value while remanance is the residual magnetization of the particle system after being magnetically saturated with an external magnetic field.

In chemistry, a catalyst support is the material, usually a solid with a high surface area, to which a catalyst is affixed. Magnetic CoPt nanoparticles are being used as an MRI contrast agent for transplanted neural stem cell detection. Grain sizes can be as small as 3 nanometers. Magnetic nanoparticles can be used for a variety of genetics applications. One application is the isolation of mRNA. Invitrogen is a supplier of such magnetic Dynabeads. Magnetic beads have also been used in plasmid assembly.