In the second case, the most significant factor, which is determined by the temperature, is the mobility of the structural defects such as grain boundaries, point vacancies, line and screw dislocations, stacking faults and twins in both crystalline and non-crystalline solids. The movement or displacement of such mobile defects is thermally activated, and thus limited by the rate of atomic diffusion. Deformation is often described as strain. 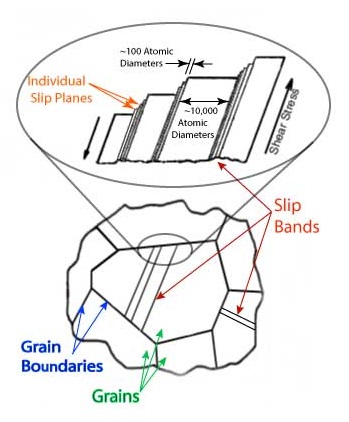 The permanent change in shape of a metallic body as the result of forces acting on its surface. The plasticity of a metal permits it to be shaped into various useful forms that are retained after the forming pressures have been removed. Complete comprehension of plastic deformation of metals requires an understanding of three areas: (1) the mechanisms by which plastic deformation occurs in metals; (2) the way in which different metals respond to a variety of imposed external or environmental conditions; and (3) the relation between the internal structure of a metal and its ability to plastically deform under a given set of conditions.

For any type of atomic packing, as the crystal is viewed from different directions, the atoms can be visualized as lying on differently oriented planes in space. Within each plane the atoms are in a regular array, and certain directions are equivalent with respect to the distance between atoms and the location of their neighbors.

The primary step in the plastic deformation of a metal crystal is the translation, or slip, of one part of the crystal with respect to the other across one of a set of crystallographically equivalent planes and in one of several possible crystallographically equivalent directions. These are known as the slip plane and slip direction, respectively. The particular direction and plane orientation differ from one metal to another, depending principally on the type of atom packing and the temperature of plastic deformation. Metals with equivalent crystal structures tend to exhibit a similar plastic response to stresses even though the actual strength and temperature range of such a like response will differ from metal to metal.

Typical stress vs. strain diagram with the various stages of deformation

In the figure it can be seen that the compressive loading (indicated by the arrow) has caused deformation in the cylinder so that the original shape (dashed lines) has changed (deformed) into one with bulging sides. The sides bulge because the material, although strong enough to not crack or otherwise fail, is not strong enough to support the load without change, thus the material is forced out laterally. Internal forces (in this case at right angles to the deformation) resist the applied load.

Depending on the type of material, size and geometry of the object, and the forces applied, various types of deformation may result. The image to the right shows the engineering stress vs. strain diagram for a typical ductile material such as steel. Different deformation modes may occur under different conditions, as can be depicted using a deformation mechanism map.

This type of deformation is reversible. Once the forces are no longer applied, the object returns to its original shape. Elastomers and shape memory metals such as Nitinol exhibit large elastic deformation ranges, as does rubber. However elasticity is nonlinear in these materials. Normal metals, ceramics and most crystals show linear elasticity and an smaller elastic range. Where is the applied stress, is a material constant called Young’s modulus. This relationship only applies in the elastic range and indicates that the slope of the stress vs. strain curve can be used to find Young’s modulus. Engineers often use this calculation in tensile tests. The elastic range ends when the material reaches its yield strength. At this point plastic deformation begins.

One material with a large plastic deformation range is wet chewing gum, which can be stretched dozens of times its original length. Under tensile stress plastic deformation is characterized by a strain hardening region and a necking region and finally, fracture (also called rupture). During strain hardening the material becomes stronger through the movement of atomic dislocations. The necking phase is indicated by a reduction in cross-sectional area of the specimen. Necking begins after the ultimate strength is reached. During necking, the material can no longer withstand the maximum stress and the strain in the specimen rapidly increases. Plastic deformation ends with the fracture of the material.