Friction Stir Welding - How Does It Works ?

Friction stir welding, a process invented at TWI, Cambridge, involves the joining of metals without fusion or filler materials. The welds are created by the combined action of frictional heating and mechanical deformation due to a rotating tool. The probe penetrates the workpiece whereas the shoulder rubs with the top surface.

The heat is generated primarily by friction between a rotating-translating tool, the shoulder of which rubs against the workpiece. There is a volumetric contribution to heat generation from the adiabatic heating due to deformation near the pin. The microstructure of a friction-stir welddepends in detail on the tool design, the rotation and translation speeds, the applied pressure and the characteristics of the material being joined. The heat-affected zone (HAZ) is as in conventional welds. 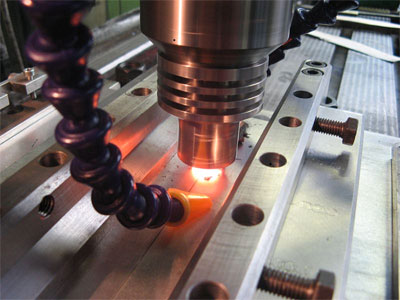 The central nugget region containing the onion-ring flow-pattern is the most severely deformed region, although it frequently seems to dynamically recrystallise, so that the detailed microstructure may consist of equiaxed grains. It seems that cylindrical sheets of material are extruded during each rotation of the tool, which on a weld cross-section give the characteristic onion-rings.

A constantly rotated cylindrical-shouldered tool with a profiled nib is traversely fed at a constant rate into a butt joint between two clamped pieces of butted material. The nib is slightly shorter than the weld depth required, with the tool shoulder riding atop the work surface.Frictional heat is generated between the wear-resistant welding components and the work pieces. This heat, along with that generated by the mechanical mixing process and the adiabatic heat within the material, cause the stirred materials to soften without melting. This process of the tool traversing along the weld line in a plasticised tubular shaft of metal results in severe solid state deformation involving dynamic recrystallization of the base material.

The top surface of the weld has a different microstructure, a consequence of the shearing induced by the rotating tool-shoulder. Friction-stir welding (FSW) is a solid-state joining process (meaning the metal is not melted) and is used for applications where the original metal characteristics must remain unchanged as far as possible. This process is primarily used on aluminium, and most often on large pieces which cannot be easily heat treated post weld to recover temper characteristics. It was invented and experimentally proven at The Welding Institute UK in December 1991.

The solid-state nature of the FSW process, combined with its unusual tool and asymmetric nature, results in a highly characteristic microstructure. The microstructure can be broken up into the following zones :

The solid-state nature of FSW leads to several advantages over fusion welding methods as problems associated with cooling from the liquid phase are avoided. Issues such as porosity, solute redistribution, solidification cracking and liquation cracking do not arise during FSW. In general, FSW has been found to produce a low concentration of defects and is very tolerant of variations in parameters and materials.

Nevertheless, FSW is associated with a number of unique defects. Insufficient weld temperatures, due to low rotational speeds or high traverse speeds, for example, mean that the weld material is unable to accommodate the extensive deformation during welding. This may result in long, tunnel-like defects running along the weld which may occur on the surface or subsurface. Low temperatures may also limit the forging action of the tool and so reduce the continuity of the bond between the material from each side of the weld. The light contact between the material has given rise to the name “kissing-bond”. This defect is particularly worrying since it is very difficult to detect using nondestructive methods such as X-ray or ultrasonic testing. If the pin is not long enough or the tool rises out of the plate then the interface at the bottom of the weld may not be disrupted and forged by the tool, resulting in a lack-of-penetration defect. This is essentially a notch in the material which can be a potent source of fatigue cracks.

A number of potential advantages of FSW over conventional fusion-welding processes have been identified :

However, some disadvantages of the process have been identified :