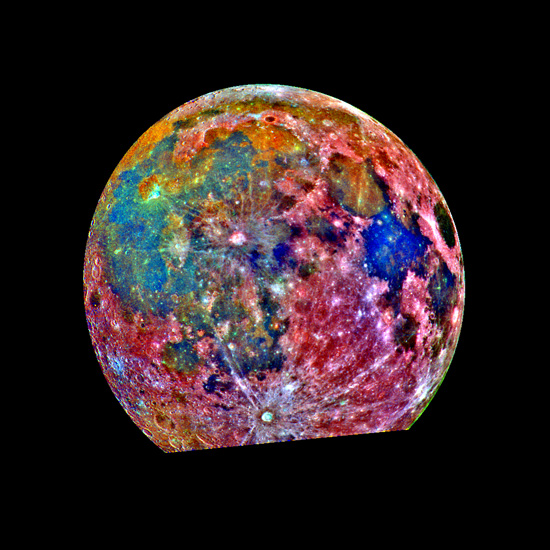 The Moon is coverered with a gently rolling layer of powdery soil with scattered rocks that is called the regolith; it is made from debris blasted out of the Lunar craters by the meteor impacts that created them. Each well-preserved Lunar crater is surrounded by a sheet of ejected material called the ejecta blanket.

The Anorthosites that are common in the Lunar Highlands are not common on the surface of the Earth (The Adirondack Mountains and the Canadian Shield are exceptions). They form the ancient cores of continents on the Earth, but these have largely been obliterated by overlying sedimentary deposits and by plate tectonic activity.

The Lunar rocks may also be examined according to the chemicals that they contain. Such analysis indicates:

The high concentration of rare metals like Titanium, and the availability of abundant amounts of Silicon and Oxygen has led to serious proposals about mining and manufacturing operations in the future for the Moon.

Moon rock describes rock that formed on the Earth’s moon. Rocks collected from the Moon have been measured by radiometric dating techniques. There are currently three sources of Moon rocks on Earth: 1) those collected by US Apollo missions; 2) samples returned by the Soviet Union Luna missions; and 3) rocks that were ejected naturally from the lunar surface by cratering events and subsequently fell to Earth as lunar meteorites.

During the six Apollo surface excursions, 2,415 samples weighing 382 kg (842 lb) were collected, the majority by Apollo 15, 16, and 17. Almost all lunar rocks are depleted in volatiles and are completely lacking in hydrated minerals common in Earth rocks. In some regards, lunar rocks are closely related to Earth’s rocks in their isotopic composition of the element oxygen. In contrast to the Earth, large portions of the lunar crust appear to be composed of rocks with high concentrations of the mineral anorthite. The mare basalts have relatively high iron values. The magnesian suite (or “mg suite”) consists of dunites (>90% olivine), troctolites (olivine-plagioclase), and gabbros (plagioclase-pyroxene) with relatively high Mg/Fe ratios in the mafic minerals and a range of plagioclase compositions that are still generally calcic (An86-93).

The alkali suite is so-called because of its high alkali content — for moon rocks. The alkali suite consists of alkali anorthosites with relatively sodic plagioclase (An70-85), norites (plagioclasse-orthopyroxene), and gabbronorites (plagioclase-clinopyroxene-orthopyroxene) with similar plagioclase compositions and mafic minerals more iron-rich than the magnesian suite. The trace element contents of these minerals also indicates a KREEP-rich parent magma. The alkali suite spans an age range similar to the magnesian suite. Lunar granites are relatively rare rocks that include diorites, monzodiorites, and granophyres.

They consist of quartz, plagioclase, orthoclase or alkali feldspar, rare mafics (pyroxene), and rare zircon. U-Pb date of zircons from these rocks and from lunar soils have ages of 4.1-4.4 Ga, more or less the same as the magnesian suite and alkali suite rocks. Lunar breccias range from glassy vitrophyre melt rocks, to glass-rich breccia, to regolith breccias. The vitrophyres are dominantly glassy rocks that represent impact melt sheets that fill large impact structures. Glassy breccias form from impact melt that exit the crater and entrain large volumes of crushed (but not melted) ejecta. As noted above, the basin-forming impacts responsible for these breccias pre-date almost all mare basalt volcanism, so clasts of mare basalt are very rare.