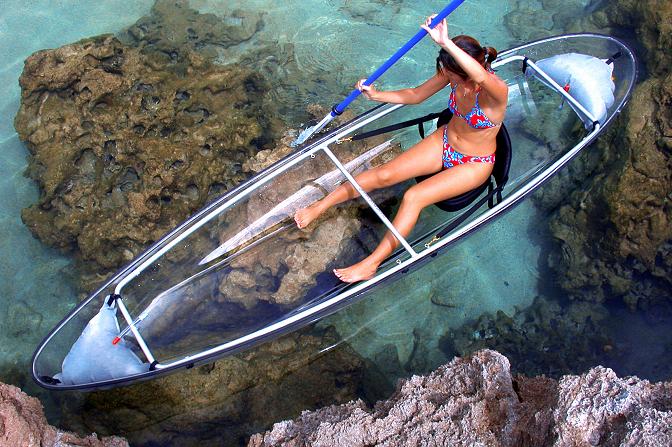 For example, sapphire (crystalline alumina) is very strong, but lacks full transparency throughout the 3–5 micrometer mid-IR range. Yttria is fully transparent from 3–5 micrometers, but lacks sufficient strength, hardness, and thermal shock resistance for high-performance aerospace applications. Not surprisingly, a combination of these two materials in the form of the yttria-alumina garnet (YAG) has proven to be one of the top performers in the field.

Transparent alumina is three times stronger than steel and transparent. The number of applications for this are huge. Imagine an entire skyscraper or arcology made largely of transparent steel. The skylines of the future could look more like a series of floating black dots (opaque private rooms) rather than the monoliths of today. A huge space station made of transparent alumina could cruise in low Earth orbit without being a creepy black dot when it passes overhead. And hey… transparent swords!

Stronger than glass, various military and commercial applications for this remarkable material are already being tested. What was once used in the science-fiction Star Trek movies, see-through aluminum is now something that – through test mixing with rubies, sapphires and more – is now being tried out in all kinds of ways to create transparency where strength is also required.

For now, it is used in static-free transparent aluminum wrapping for computer parts and other electronics. It is also being tested in otherwise-conventional see-through soda cans and military shielding for vehicles where windows once were. At over ten dollars per square inch, however, it is still not cheap enough for mainstream everyday use – but may be someday soon.

Many ceramic materials, both glassy and crystalline, have found use as optically transparent materials in various forms from bulk solid-state components to high surface area forms such as thin films, coatings and fibers. Such devices have found widespread use for various applications in the electro-optical field including: optical fibers for guided lightwave transmission, optical switches, laser amplifiers and lenses, hosts for solid-state lasers and optical window materials for gas lasers, and infrared (IR) heat seeking devices for missile guidance systems and IR night vision.

While single-crystalline ceramics may be largely defect-free (particularly within the spatial scale of the incident light wave), optical transparency in polycrystalline materials is limited by the amount of light which is scattered by their microstructural features. The amount of light scattering therefore depends on the wavelength of the incident radiation, or light.

For example, since visible light has a wavelength scale on the order of hundreds of nanometers, scattering centers will have dimensions on a similar spatial scale. Most ceramic materials, such as alumina and its compounds, are formed from fine powders, yielding a fine grained polycrystalline microstructure which is filled with scattering centers comparable to the wavelength of visible light. Thus, they are generally opaque as opposed to transparent materials. Recent nanoscale technology has, however, made possible the production of (poly)crystalline transparent ceramics such as alumina Al2O3, yttria alumina garnet (YAG), and neodymium-doped Nd:YAG.

In 1961, General Electric began selling transparent alumina Lucalox bulbs.In 2004, Anatoly Rosenflanz and colleagues at 3M used a “flame-spray” technique to alloy aluminium oxide (or alumina) with rare-earth metal oxides in order to produce high strength glass-ceramics with good optical properties. The method avoids many of the problems encountered in conventional glass forming and may be extensible to other oxides. This goal has been readily accomplished and amply demonstrated in laboratories and research facilities worldwide using the emerging chemical processing methods encompassed by the methods of sol-gel chemistry and nanotechnology.

Many ceramic materials, both glassy and crystalline, have found use as hosts for solid-state lasers and as optical window materials for gas lasers. The first working laser was made by Theodore H. Maiman in 1960 at Hughes Research Laboratories in Malibu, who had the edge on other research teams led by Charles H. Townes at Columbia University, Arthur Schawlow at Bell Labs, and Gould at TRG (Technical Research Group). Maiman used a solid-state light-pumped synthetic ruby to produce red laser light at a wavelength of 694 nanometers (nm). Synthethic ruby lasers are still in use.

Ruby lasers consist of single-crystal sapphire alumina (Al2O3) rods doped with a small concentration of chromium Cr, typically in the range of 0.05%. The end faces are highly polished with a planar and parallel configuration. Neodymium-doped YAG (Nd:YAG) has proven to be one of the best solid-state laser materials. Its indisputable dominance in a broad variety of laser applications is determined by a combination of high emission cross section with long spontaneous emission lifetime, high damage threshold, mechanical strength, thermal conductivity, and low thermal beam distortion. The fact that the Czochralski crystal growth of Nd:YAG is a matured, highly reproducible and relatively simple technological procedure adds significantly to the value of the material.

Nd:YAG lasers are used in manufacturing for engraving, etching, or marking a variety of metals and plastics. They are extensively used in manufacturing for cutting and welding steel and various alloys. For automotive applications (cutting and welding steel) the power levels are typically 1–5 kW. In addition, Nd:YAG lasers are used in ophthalmology to correct posterior capsular opacification, a condition that may occur after cataract surgery, and for peripheral iridotomy in patients with acute angle-closure glaucoma, where it has superseded surgical iridectomy. Frequency-doubled Nd:YAG lasers (wavelength 532 nm) are used for pan-retinal photocoagulation in patients with diabetic retinopathy. In oncology, Nd:YAG lasers can be used to remove skin cancers.

These lasers are also used extensively in the field of cosmetic medicine for laser hair removal and the treatment of minor vascular defects such as spider veins on the face and legs. Recently used for dissecting cellulitis, a rare skin disease usually occurring on the scalp. Using hysteroscopy in the field of gynecology, the Nd:YAG laser has been used for removal of uterine septa within the inside of the uterus.In dentistry, Nd:YAG lasers are used for soft tissue surgeries in the oral cavity.

The Livermore team is also exploring new ways to chemically synthesize the initial nanopowders. Borrowing on expertise developed in CMS over the past 5 years, the team is synthesizing nanopowders based on sol-gel processing, and then sintering them accordingly in order to obtain the solid-state laser components. Another technique being tested utilizes a combustion process in order to generate the powders by burning an organic solid containing yttrium, aluminum, and neodymium. The smoke is then collected, which consists of spherical nanoparticles.

A night vision device (NVD) is an optical instrument that allows images to be produced in levels of light approaching total darkness. They are most often used by the military and law enforcement agencies, but are available to civilian users. Night vision devices were first used in World War II, and came into wide use during the Vietnam War. The technology has evolved greatly since their introduction, leading to several “generations” of night vision equipment with performance increasing and price decreasing. The United States Air Force is experimenting with Panoramic Night Vision Goggles (PNVGs) which double the user’s field of view to around 95 degrees by using four 16 mm image intensifiers tubes, rather than the more standard two 18 mm tubes.

Thermography has a long history, although its use has increased dramatically with the commercial and industrial applications of the past fifty years. Firefighters use thermography to see through smoke, to find persons, and to localize the base of a fire. Maintenance technicians use thermography to locate overheating joints and sections of power lines, which are a tell-tale sign of impending failure. Building construction technicians can see thermal signatures that indicate heat leaks in faulty thermal insulation and can use the results to improve the efficiency of heating and air-conditioning units. Some physiological changes in human beings and other warm-blooded animals can also be monitored with thermal imaging during clinical diagnostics.

The most commonly used ceramic material in IR radiation microbolometers is vanadium oxide. The various crystalline forms of vanadium oxide include both VO2 and V2O5. Deposition at high temperatures and performing post-annealing allows for the production of thin films of these crystlalline compounds with superior properties, which may be easily integrated into the fabrication process. VO2 has low resistance but undergoes a metal-insulator phase change near 67oC and also has a lower TCR value. On the other hand, V2O5 exhibits high resistance and also high TCR.

Many ceramic nanomaterials of interest for transparent armor solutions are also used for electromagnetic (EM) windows. These applications include radomes, IR domes, sensor protection, and multi-spectral windows. Optical properties of the materials used for these applications are critical, as the transmission window and related cut-offs (UV – IR) control the spectral bandwidth over which the window is operational. Not only must these materials possess abrasion resistance and strength properties common of most armor applications, but due to the extreme temperatures associated with the environment of military aircraft and missiles, the must also possess excellent thermal stability.

There is an increasing need in the military sector for high-strength, robust materials which have the capability to transmit light around the visible (0.4–0.7 micrometers) and mid-infrared (1–5 micrometers) regions of the spectrum. These materials are needed for applications requiring transparent armor. Transparent armor is a material or system of materials designed to be optically transparent, yet protect from fragmentation or ballistic impacts. The primary requirement for a transparent armor system is to not only defeat the designated threat but also provide a multi-hit capability with minimized distortion of surrounding areas. Transparent armor windows must also be compatible with night vision equipment. New materials that are thinner, lightweight, and offer better ballistic performance are being sought.

Magnesium aluminate spinel (MgAl2O4) is a transparent ceramic with a cubic crystal structure with an excellent optical transmission from 0.2 to 5.5 micrometers in its polycrystlalline form. Optical quality transparent spinel has been produced by sinter/HIP, hot pressing, and hot press/HIP operaiotns, and it has been shown that the use of a hot isostatic press can improve its optical and physical properties.

Single-crystal aluminum oxide (sapphire – Al2O3) is a transparent ceramic. Sapphire’s crystal structure is rhombohedral and thus its properties are anisotropic vary with crystallographic orientation. Transparent alumina is currently one of the most mature transparent ceramics from a production and application perspective, and is available from several manufacturers. But the cost is high due to the processing temperature involved, as well as machining costs to cut parts out of single crystal boules. It also has a very high mechanical strength – but that is dependent on the surface finish.

Future high-speed infrared-guided missiles will require new dome materials that are substantially more durable than those in use today, while retaining maximum transparency across the entire operational spectrum or bandwidth. A long-standing compromise exists between optical bandpass and mechanical durability within the current group of single-phase (crystalline or glassy) IR transmitting ceramic materials, forcing missile designers to accept substandard overall system performance. Optical nanocomposites may provide the opportunity to engineer new materials that may overcome these traditional limitations.