Do you know Polymer ?

The word polymer is derived from the Greek words - poly- meaning “many”; and - meros meaning “part”. The term was coined in 1833 by Jöns Jacob Berzelius, although his definition of a polymer was quite different from the modern definition.

Polymerization is the process of combining many small molecules known as monomers into a covalently bonded chain or network. During the polymerization process, some chemical groups may be lost from each monomer. This is the case, for example, in the polymerization of PET polyester. The monomers are terephthalic acid (HOOC-C6H4-COOH) and ethylene glycol (HO-CH2-CH2-OH) but the repeating unit is -OC-C6H4-COO-CH2-CH2-O-, which corresponds to the combination of the two monomers with the loss of two water molecules. The distinct piece of each monomer that is incorporated into the polymer is known as a repeat unit or monomer residue.

A polymer is a large molecule (macromolecule) composed of repeating structural units. These sub-units are typically connected by covalent chemical bonds. Although the term polymer is sometimes taken to refer to plastics, it actually encompasses a large class of compounds comprising both natural and synthetic materials with a wide variety of properties.

Because of the extraordinary range of properties of polymeric materials, they play an essential and ubiquitous role in everyday life. This role ranges from familiar synthetic plastics and elastomers to natural biopolymers such as nucleic acids and proteins that are essential for life. 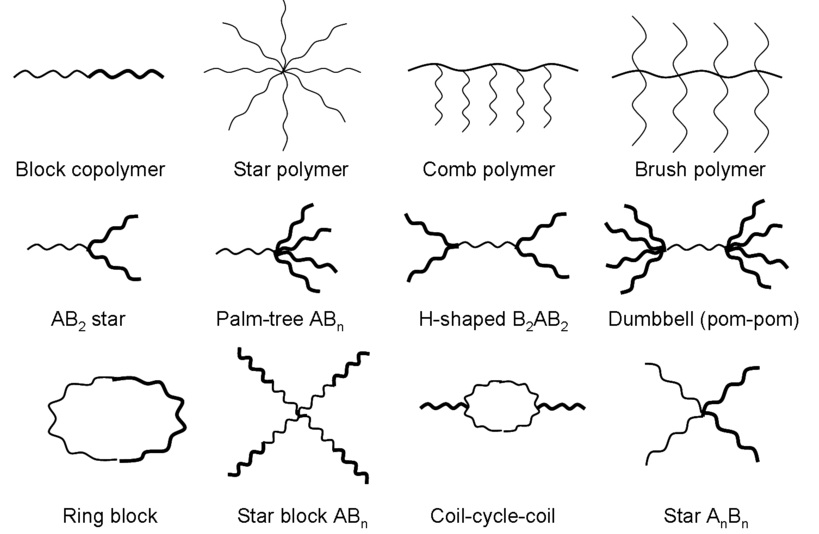 Natural polymeric materials such as shellac, amber, and natural rubber have been used for centuries. A variety of other natural polymers exist, such as cellulose, which is the main constituent of wood and paper. The list of synthetic polymers includes synthetic rubber, Bakelite, neoprene, nylon, PVC, polystyrene, polyethylene, polypropylene, polyacrylonitrile, PVB, silicone, and many more.

Most commonly, the continuously linked backbone of a polymer used for the preparation of plastics consists mainly of carbon atoms. A simple example is polyethylene (‘polythene’ in British English), whose repeating unit is based on ethylene monomer. However, other structures do exist; for example, elements such as silicon form familiar materials such as silicones, examples being Silly Putty and waterproof plumbing sealant. Oxygen is also commonly present in polymer backbones, such as those of polyethylene glycol, polysaccharides (in glycosidic bonds), and DNA (in phosphodiester bonds).

Increasing chain length furthermore tends to decrease chain mobility, increase strength and toughness, and increase the glass transition temperature. This is a result of the increase in chain interactions such as Van der Waals attractions and entanglements that come with increased chain length[citation needed]. These interactions tend to fix the individual chains more strongly in position and resist deformations and matrix breakup, both at higher stresses and higher temperatures.

When applied to polymers, the term crystalline has a somewhat ambiguous usage. In some cases, the term crystalline finds identical usage to that used in conventional crystallography. For example, the structure of a crystalline protein or polynucleotide, such as a sample prepared for x-ray crystallography, may be defined in terms of a conventional unit cell composed of one or more polymer molecules with cell dimensions of hundreds of angstroms or more.