For most uses of gold the pure metal is too soft on its own and is therefore hardened by the addition of alloying elements, copper, silver, nickel, palladium and zinc. Gold is of course yellow and the various colours seen such as red, white and green are simply alloys of gold. The final colour is dependent on the ratios and type of alloys added. 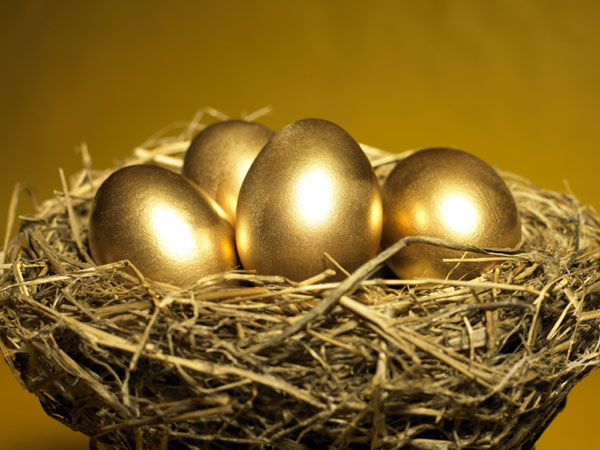 Industrial uses of gold depend primarily upon the corrosion resistance and secondarily upon the strength that can be secured by alloying alone or by alloying and heat treating. Many alloys used in dentistry contain gold, silver, and copper, often with small amounts of platinum and palladium; these alloys can be heat-treated to develop strengths above 150,000 psi (1.0 gigapascal). The latter have good spring properties.

Alloys of this type find many electrical uses as contacts, particularly where rubbing is involved. Gold electroplate, often thin, is employed on high-frequency conductors, such as those in radar equipment, because of the high electrical conductivity and tarnish resistance of gold. For the same reason gold is employed in the construction of many transistors, microcircuits, printed circuits, and integrated circuits. Most such devices are so small that the cost of gold is relatively unimportant.

Because gold does not oxidize when heated in air, appropriate gold compounds can be decomposed by heat to liberate the metal. Compounds of this type are used in the decoration of china and also for the production of printed electrical circuits on ceramics. These materials, known as liquid bright golds, are applied in the form of varnish, which is dried and then heated to redness, leaving a thin film of gold firmly attached to the underlying ceramic.

White gold is an alloy of gold and at least one white metal, usually nickel, manganese or palladium. Like yellow gold, the purity of white gold is given in karats. White gold’s properties vary depending on the metals and proportions used. As a result, white gold alloys can be used for many different purposes; while a nickel alloy is hard and strong and therefore good for rings and pins, gold-palladium alloys are soft, pliable and good for white gold gemstone settings, sometimes with other metals like copper, silver, and platinum for weight and durability, although this often requires specialized goldsmiths. The term white gold is used very loosely in the industry to describe karat gold alloys with a whitish hue. Many believe that the color of the rhodium plating, which is seen on many commercial pieces, is actually the color of white gold. The term “white” covers a large spectrum of colors that borders or overlaps pale yellow, tinted brown, and even very pale rose. The jewelry industry often improves these off-white colors by rhodium plating.

Palladium is the next choice for use in white gold alloys and, apart from its high price and high melting point (1552 degrees celsius), is an ideal alloy. Additions of about 10 -12% palladium to gold impart a good white colour. But palladium is an expensive metal and it is also a heavy metal. Thus jewellery in such palladium white golds will be more expensive than identical pieces in nickel whites for 2 reasons: firstly, the cost of the palladium and secondly, the impact of density - palladium white golds are denser and so such jewellery will be heavier. It is also more difficult to process as the melting temperatures are substantially higher.

While pure gold is yellow in color, colored gold can be developed into various colors. These colors are generally obtained by alloying gold with other elements in various proportions. For example, alloys which are mixed 14 parts gold to 10 parts alloy create 14-karat gold, 18 parts gold to 6 parts alloy creates 18 karat, and so on. This is often expressed as the result of the ratio, i.e.: 14/24 equals 0.585 and 18/24 is 0.750. There are hundreds of possible alloys and mixtures, but in general the addition of silver will color gold white, and the addition of copper will color it red. A mix of around 50/50 copper and silver gives the range of yellow gold alloys the public is accustomed to seeing in the marketplace. A small amount (0.2%) of zinc can be added to harden the alloy.

Crown gold is a 22 karat (kt) gold alloy, introduced in England for gold crown coin manufacture in 1526 (by Henry VIII). It is 22/24 = 0.91667 fine or 91.667% gold. Previously, gold sovereign coins were made from 23 kt gold, but this was soft and invited deliberate filing, and also non-intentional wear. The 22 kt standard has been used for British gold coins ever since this change. The alloying metal in England was and is traditionally copper-only, although a component of 1.25% silver replacing the same weight of copper, as a softening agent, was briefly used in gold sovereigns in the single year of 1887, for better production of an image of Queen Victoria for the Golden Jubilee of her reign. Crown gold with copper as the only alloying metal other than gold, remains the standard used in the British gold sovereign, which is still minted.

Electrum is a naturally occurring alloy of gold and silver, with trace amounts of copper and other metals. It has also been produced artificially. The ancient Greeks called it ‘gold’ or ‘white gold’, as opposed to ‘refined gold’. Its color ranges from pale to bright yellow, depending on the proportions of gold and silver. The gold content of naturally occurring electrum in modern Western Anatolia ranges from 70% to 90%, in contrast to the 45–55% of electrum used in ancient Lydian coinage of the same geographical area. This suggests that one reason for the invention of coinage in that area was to increase the profits from seignorage by issuing currency with a lower gold content than the commonly circulating metal.

The highest karat version of rose gold is also known as crown gold, which is 22 karat. Eighteen karat red gold may be made of 25% copper and 75% gold. For 18 karat rose gold, typically about 4% silver is added to 75% gold and 21% copper to give a rose color. 14 karat red gold is often found in the Middle East and contains 41.67% copper.

Green gold alloys are made by leaving the copper out of the alloy mixture and just using gold and silver. It actually appears as a greenish yellow rather than green. Eighteen karat green gold would therefore contain a mix of gold 75% and silver 25% (or 73% gold and 27% silver). Fired enamels adhere better to these alloys. Green gold was known to Lydians as long ago as 860 BC under the name electrum, a naturally occurring alloy of silver and gold. Cadmium can be added to gold alloys in amount of up to 4% to achieve green color. The alloy of 75% gold, 23% copper, and 2% cadmium yields light green 18ct gold. The alloy of 75% gold, 15% silver, 6% copper, and 4% cadmium yields a dark green alloy. Cadmium is, however, toxic.

Black gold is a type of gold used in jewelry.
Black colored gold can be produced by various methods:

A range of colors from brown to black can be achieved on copper-rich alloys by treatment with potassium sulfide. Cobalt-containing alloys, e.g. 75% gold with 25% cobalt, form a black oxide layer with heat treatment at 700-950 °C. Copper, iron and titanium can be also used for such effect. Gold-cobalt-chromium alloy (75% gold, 15% cobalt, 10% chromium) yields surface oxide that’s olive-tinted because of the chromium(III) oxide content, is about 5 times thinner than Au-Co and has significantly better wear resistance. The gold-cobalt alloy consists of a gold-rich (about 94% Au) and cobalt-rich (about 90% Co) phases; the cobalt-rich phase grains are capable of oxide layer formation on their surface.