Nanosolar or Nanotechnology Solar Cell is a developer of solar power technology. Based in San Jose, CA, Nanosolar has developed and commercialized a low-cost printable solar cell manufacturing process. The company started selling panels mid-December 2007, and plans to sell them at around $1 per watt. When first announced that was just one fifth the price of the silicon cells, but in 2010 brand name silicon cells sell from around $1.70 reducing Nanosolar’s cost advantage significantly. 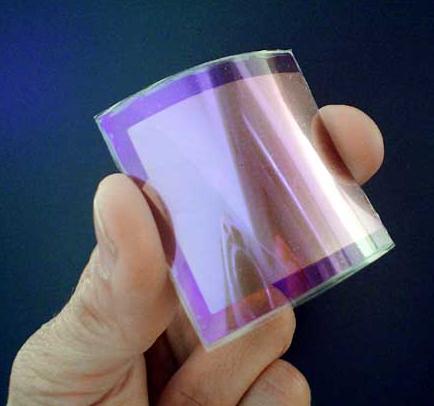 The idea is to create the most efficient solar cells that are able to work at the tiniest “nano” level. Nanotechnology involves creating “machines” that are fully operational even though they are microscopic. Nanosolar has basically created solar cells that are so small you can’t even see them. So how do you install a microscopic solar cell on your roof? Well, that’s where it gets interesting. Nanosolar creates these solar cells in a big plastic sheet that can be rolled out like a carpet. These “PowerSheets” can be mounted onto an existing house or incorporated into a new build.Using techniques borrowed from the microprocessor business, Nanosolar “prints” the solar cells onto silicon wafers. Creating cells this way has reduced the cost of solar power down to a level where it will soon be competitive with other sources of energy.

Titanium dioxide nanotubes filled with a polymer to form low cost solar cells. Combining lead selenide quantum dots with titanium dioxide to form higher higher efficiency solar cells.Combining carbon nanotubes, bucky-balls and polymers to produce inexpensive solar cells that can be formed by simply painting a surface.Researchers at Stanford University have found a way to trap light in organic solar cells. The researchers found that by making the organic layer much thinner than the wavelength of light and sandwiching the organic layer between a mirror layer and a rough layer the light stayed in the solar cell longer and excited more electrons.

Nanosolar planned to build a large production facility in San Jose and in Germany, with an annual capacity of 430 megawatts. Nanosolar is also building a panel manufacturing plant in Luckenwalde (Berlin). Several German energy and venture capital companies have heavily invested in this company as a consequence of the favourable economics for solar energy in Germany due to government subsidies.

Photocell and Nanotechnology. Here, we see the sequence of events in a nano-enhanced photocell. Light excites and electon-hole pair in a pn junction that has a voltage difference across it. Carriers are swept out to do useful work.

On December 12, 2007 the company announced that it had started solar cell production in its San Jose factory, with its German facility slated to go into operation in the 1st quarter of 2008. The company said in 2006 that the San Jose factory, when fully built, would have the capacity to produce 430 megawatts of cells each year.

On December 18, 2007 the company began shipping its first solar panels for a one-megawatt municipal power plant in Germany. The company uses copper indium gallium diselenide which achieves up to 19.9% efficiency in laboratory samples to build their thin film solar cells. The company’s technology gained early industry recognition with the presentation of a Small Times Magazine award at a leading nanotech business event in 2005. Nanosolar’s solar cells have been verified by NREL to be as efficient as 14.6% in 2006 and 15.3% in 2009.Technical details of Nanosolar’s new manufacturing techniques have been disclosed in patent applications. Some information about their process has become available in a Scientific American article (in German). These details involve a semiconductor ink that it claims will enable it to produce solar cells with a basic printing process, rather than using slow and expensive high-vacuum based thin-film deposition processes.

Using nanoparticles in the manufacture of solar cells has the following benefits :

The ink is deposited on a flexible substrate (the “paper”), and then nanocomponents in the ink align themselves properly via molecular self-assembly. In September 2009, Nanosolar announced the launch of production at a rate of 640 MW annually however, ramp-up to volume production after the announcement took an additional six months, limiting actual production in 2009 to an estimated 4 MW, and as of August 2010 the plant is still ramping up toward its announced capacity. Efficiencies for current production panels are said to be 8-9%, with plans to submit panels with 10-11% efficiency for IEC certification in the fall of 2010. The problem of absorption is one of the issues that keeps the electricity output of solar panels low and the cost of solar power high. Solar panels are designed to absorb sunlight at a single angle. The new coating made of nanorods allows the solar panel to absorb light from any angle.

According to the company, “leveraging recent science advances in nanostructured materials, Nanosolar has developed a proprietary ink that makes it possible to simply print the semiconductor of a high-performance solar cell. This ink is based on Nanosolar developing various proprietary forms of nanoparticles and associated organic dispersion chemistry and processing techniques suitable for delivering a semiconductor of high electronic quality”.

The nanorods form a multi-layer coating that works like a series of funnels. The top layer of nanorods takes the light hitting the panel at wide angles and bends it to a slightly narrower angle. Successive layers narrow the angle even further, funneling the light so it hits the active region of the panel at a ninety degree angle, eliminating the panel’s need to rotate with the sun. One example is a tube-shaped panel instead of a flat panel.

Last, the substrate material on which the ink is printed is much more conductive and less expensive than the stainless steel substrates that are often used in thin-film solar panels. These solar cells successfully blend the needs for efficiency, low cost, and longevity and will be easy to install due to their flexibility and light weight. Estimates by Nanosolar of the cost of these cells fall roughly between 1/10 and 1/5 the industry standard per kilowatt. The company implies that their solar cells can last more than 25 years by saying they “achieve a durability compatible with our 25-year warranty.”