Could nanotechnology make a food? 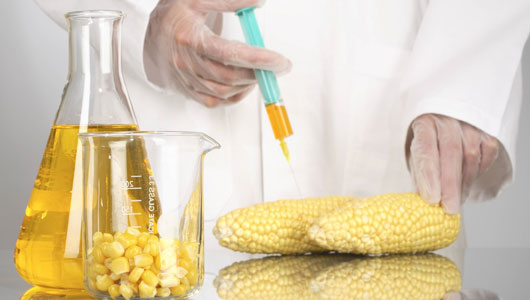 Experts say nanotechnology’s future in food could be thwarted by a reluctance among food manufacturers fearful of the kind of consumer backlash that greeted genetically modified food to be open about what they are doing. (Photo: ZUMA Press)

However, most nanotechnology does not result in nanoparticles and many nanoparticles are from natural origin and therefore should not be considered nanotechnology. The opportunities of doing business at the nano-level in food applications arise from the realization that foodstuff usually has a structural hierarchy that starts at the molecular and supramolecular level.

Nanotechnology today introduces a new wave of assaults on our foods. Nanotechnology is the high technology, atomically processed antithesis to organic agriculture, which values the natural health-giving properties of fresh, unprocessed wholefoods.

It further transforms the farm into an automated extension of the high technology factory production line, using patented products that will inevitably concentrate corporate control. It also introduces serious new risks for human health and the environment.

Following on from genetic engineering, nanotechnology represents the latest high technology attempt to infiltrate our food supply. Around the world there is an increase in interest in our food, health and environment. The organic and local food movements have emerged as an intuitive and practical response to the increasing use of chemicals in food production, and to the growing alienation of industrial agribusiness from holistic agricultural systems.

People have chosen to eat organic foods because they care about the health of their families and the health of the environment. Organic agriculture also enables people to support integrated, environmentally friendly agriculture, and appropriate technology, rather than chemical-intensive factory farming. And in agriculture, nanotechnology promises to reduce pesticide use, improve plant and animal breeding, and create new nano-bioindustrial products” – or so states the US Project on Emerging Nanotechnologies’ recent report on the use of nanotechnology in food and agriculture.

Now, nanotechnology introduces a new wave of assaults on our foods. Nanotechnology is the high technology, atomically processed antithesis to organic agriculture, which values the natural health-giving properties of fresh, unprocessed wholefoods. The U.S. Food and Drug Administration (FDA) regulates a wide range of products, including foods, cosmetics, drugs, devices, veterinary products, and tobacco products some of which may utilize nanotechnology or contain nanomaterials.

Nanotechnology allows scientists to create, explore, and manipulate materials measured in nanometers (billionths of a meter). Industry analysts and proponents predict that nanotechnology will be used to transform food from the atom up: “Thanks to nanotechnology, tomorrow’s food will be designed by shaping molecules and atoms. Food will be wrapped in “smart” safety packaging that can detect spoilage or harmful contaminants. Future products will enhance and adjust their color, flavor, or nutrient content to accommodate each consumer’s taste or health needs.

The food and agriculture industries have been investing billions of dollars into nanotechnology research, with an unknown number of unlabeled nano food products already on the market. In the absence of mandatory product labelling anywhere in the world, it is impossible to tell how many commercial food products now contain nano ingredients. The Helmut Kaiser Consultancy Group, a pro-nanotechnology analyst, suggests that there are now over 300 nano food products available on the market worldwide. It predicts that nanotechnology will be used in 40% of the food industries by 2015. Nanotechnology has begun to find potential applications in the area of functional food by engineering biological molecules toward functions very different from those they have in nature, opening up a whole new area of research and development. Of course, there seems to be no limit to what food technologists are prepared to do to our food (read this delightful romp through the food processing industry to get the idea: “Twinkie, Deconstructed”. We have taken a critical view of food nanotechnology before in this column and in our news coverage, just take a look at “Nanotechnology food coming to a fridge near you” or “Are you ready for your nano-engineered wine? “. Today, though, we look at the potentially beneficial effects nanotechnology-enabled innovations could have on our foods and, subsequently, on our health.

According to a definition in a recent report (“Nanotechnology in Agriculture and Food”), food is nanofood when nanoparticles, nanotechnology techniques or tools are used during cultivation, production, processing, or packaging of the food. It does not mean atomically modified food or food produced by nanomachines. Apart from funky food that changes color and taste, and glows in the dark, food nanotechnology will also lead to beneficial health effects in overfed Western countries. Nanotechnology will take the genetic engineering of agriculture to the next level down – atomic engineering. Nanotech companies are working to fortify processed food with nano-encapsulated nutrients, its appearance and taste boosted by nano-developed colours, its fat and sugar content removed or disabled by nano-modification, and ‘mouth feel’ improved. ‘Smart’ foods could also sense when an individual was allergic to a food’s ingredients, and block the offending ingredient.

Nanotechnology will dramatically extend food shelf life. ‘Smart’ packaging (containing nano-sensors and anti-microbial activators) is being developed that will be capable of detecting food spoilage and releasing nano-anti-microbes to extend food shelf life, enabling supermarkets to keep food for even greater periods before its sale. Nano-sensors, embedded into food products as tiny chips that were invisible to the human eye, would also act as electronic barcodes. They would emit a signal that would allow food, including fresh food, to be tracked from paddock to factory to supermarket and beyond.

Concerns about the use of nanotechnology in agriculture and food production relate to the further automation and alienation of food production, serious new toxicity risks for humans and the environment, and the further loss of privacy as nano surveillance tracks each step in the food chain. Applications of nanotechnology to food processing assume that humans can ‘improve’ the taste, texture, appearance, nutritional content and longevity of food by manipulating it at the atomic level. The use of nano-surveillance in food packaging will also introduce new privacy concerns. Alarmingly, despite the release into supermarkets and into the environment of nano food and agriculture products, governments world wide have yet to introduce any regulation to manage nanotechnology’s risks.