What is Superalloy ? - Definition and Meaning

A superalloy is a metal specially designed for applications requiring a high level of resistance to elevated temperatures, tensile strength, and resistance to corrosion. These alloys are usually categorized under three possible types: a cobalt base, a nickel base, and a nickel-iron base. Superalloys are often used in chemical conversion plants, industrial turbines, and aerospace turbines. Although they have high resistance properties, some superalloys may need additional protective coatings to maintain performance levels, particularly if they are employed under temperatures near their incipient melting points or under extreme load-bearing conditions. 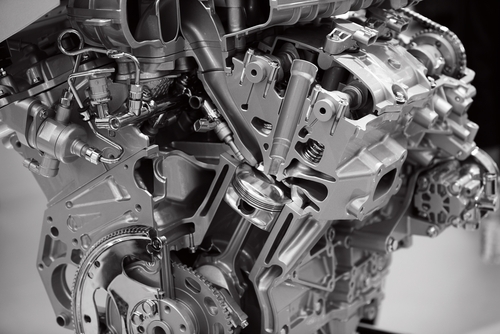 A superalloy’s base alloying element is usually nickel, cobalt, or nickel-iron. Superalloy development has relied heavily on both chemical and process innovations and has been driven primarily by the aerospace and power industries. Typical applications are in the aerospace, industrial gas turbine and marine turbine industry, e.g. for turbine blades for hot sections of jet engines, and bi-metallic engine valves for use in diesel and automotive applications.  A superalloy, or high-performance alloy, is an alloy that exhibits excellent mechanical strength and creep resistance at high temperatures, good surface stability, and corrosion and oxidation resistance. Superalloys typically have a matrix with an austenitic face-centered cubic crystal structure.

Superalloys are metallic materials for service at high temperatures, particularly in the hot zones of gas turbines. Such materials allow the turbine to operate more efficiently by withstanding higher temperatures. Turbine Inlet Temperature (TIT), which is a direct indicator of the efficiency of a gas turbine engine, depends on the temperature capability of 1st stage high pressure turbine blade made of Ni base superalloys exclusively. One of the most important superalloy properties is high temperature creep resistance. Other crucial material properties are fatigue life, phase stability, as well as oxidation and corrosion resistance.

Superalloys develop high temperature strength through solid solution strengthening. Oxidation and corrosion resistance is provided by the formation of a protective oxide layer which is formed when the metal is exposed to oxygen and encapsulates the material, and thus protecting the rest of the component. Oxidation or corrosion resistance is provided by elements such as aluminium and chromium. By far the most important strengthening mechanism is through the formation of secondary phase precipitates such as gamma prime and carbides through precipitation strengthening.

Plot showing the improvement since 1940 in the temperature capacity of metallic alloys, specifically nickel-based superalloys, for gas-turbine engine applications and demonstrating the need for new materials, such as molybdenum based superalloys, in order to achieve further technological gains.

Many superalloys have a two phase heat treatment which creates a dispersion of square gamma prime particles known as the primary phase with a fine dispersion between these known as secondary gamma prime. Many other elements, both common and exotic, (including not only metals, but also metalloids and nonmetals) can be present; chromium, cobalt, molybdenum, tungsten, tantalum, aluminium, titanium, zirconium, niobium, rhenium, carbon, boron or hafnium are just a few examples. Cobalt base superalloys do not have a strengthening secondary phase like gamma prime.

The superalloys of the first generation were intended for operation up to 700 °C (973 K). The modern superalloys of the fourth generation are made and used as single crystals (monocrystals) and are extra alloyed, especially with ruthenium. They can operate up to 1100 °C (1373 K). The structure of most precipitation strengthened nickel-base superalloys consists of the gamma matrix, and of intermetallic ?’ precipitates. The ?-phase is a solid solution with a face-centered crystal (fcc) lattice and randomly distributed different species of atoms.

Within gas turbine engines many forms of superalloys are present. Polycrystalline Ni-base superalloys are used for the disks of the high pressure turbine which can be created using powder metallurgy or casting technology. Turbine blades can be polycrystalline, have a columnar grain structure, or be a single crystal. Polycrystalline blades are formed using casting technology into a ceramic mold. Columnar grain structured blades are created using directional solidification techniques and have grains parallel to the major stress axes.

Single-crystal superalloys (SC superalloys) are formed as a single crystal using a modified version of the directional solidification technique, so there are no grain boundaries in the material. The mechanical properties of most other alloys depend on the presence of grain boundaries, but at high temperatures, they would participate in creep and must be replaced by other mechanisms. In many such alloys, islands of an ordered intermetallic phase sit in a matrix of disordered phase, all with the same crystalline lattice. This approximates the dislocation-pinning behavior of grain boundaries, without introducing any amorphous solid into the structure.

Superalloys are commonly used in gas turbine engines in regions that are subject to high temperatures which require high strength, excellent creep resistance, as well as corrosion and oxidation resistance. In most turbine engines this is in the high pressure turbine where air cooled blades can face temperatures 200°C above the melting temperature of the superalloy used. Air cooling (such as the air cooling holes seen in the picture above) and thermal barrier coatings (TBCs) play an important role in blades allowing them to operate under such conditions, protecting the base material from the thermal effects as well as corrosion and oxidation.

Turbocharger turbines also use superalloys, typically electron beam welded to a steel shaft. Common superalloys in this application are for instance Inconel 713 and Mar-M 247. The latter is particularly useful for gasoline engines as it reduce the need for fuel enrichment at high loads which improve engine efficiency.

They are also used where corrosion by media would rule-out other metal materials (e.g.) instead of stainless steel in acidic or saltwater environments. Superalloys (such as Nimonic 80A) are also used in the poppet valves of piston engines, both for diesel and gasoline engines. This is either in the form of a single solid valve or as a bi-metallic valve. The corrosions resistance is particularly useful when dealing with the high temperatures and pressures found in a diesel engine. The superalloys resist pitting and degradation allowing operating conditions that would not be possible with a regular stainless steel.