An alloy is a metal composed of more than one element. Engineering alloys include the cast-irons and steels, aluminum alloys, magnesium alloys, titanium alloys, nickel alloys, zinc alloys and copper alloys. For example, brass is an alloy of copper and zinc. An alloy is a metallic substance that is made from the mixture of multiple metals or, sometimes, a metal with some other element such as carbon. 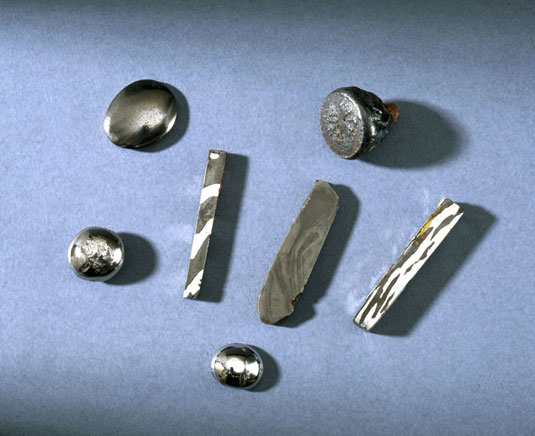 Alloys have been around for about nine millennia, but like most other domains in science and technology, the bulk of progress in alloy technology has occurred in the last few decades. In an alloy, the constituent elements are not meant to combine into larger molecules through chemical reactions, but are merely mixed together. When there are different ratios between two or more metals, the alloys produced have slightly different properties. Alloy is a metal made by combining 2 or more metallic elements, especially to give strength or resistance to corroding.

Alloying a metal is done by combining it with one or more other metals or non-metals that often enhance its properties. For example, steel is stronger than iron, its primary element. The physical properties, such as density, reactivity, Young’s modulus, and electrical and thermal conductivity, of an alloy may not differ greatly from those of its elements, but engineering properties such as tensile strength and shear strength may be substantially different from those of the constituent materials.

This is sometimes a result of the sizes of the atoms in the alloy, because larger atoms exert a compressive force on neighboring atoms, and smaller atoms exert a tensile force on their neighbors, helping the alloy resist deformation. Sometimes alloys may exhibit marked differences in behavior even when small amounts of one element occur. For example, impurities in semi-conducting ferromagnetic alloys lead to different properties, as first predicted by White, Hogan, Suhl, Tian Abrie and Nakamura.

Some alloys are made by melting and mixing two or more metals. Bronze, an alloy of copper and tin, was the first alloy discovered, during the prehistoric period now known as the bronze age, it was harder than pure copper and originally used to make tools and weapons, but was later superseded by metals and alloys with better properties. In later times bronze has been used for ornaments, bells, statues, and bearings. Brass is an alloy made from copper and zinc.

The first metal to be extracted from ore was copper. Shortly thereafter, it was combined with tin to create the stronger bronze, which dominated human technology for thousands of years.

This period is now called the Bronze Age. alloying is a term which describes a material which, when introduced to another material will change its characteristics to make them advantageous to us. they are split into 2 categories, “Matrix’s” and “reinforcement agent”. For example with carbon fibre the matrix is the carbon and the reinforcement agent is a resin.

Other metals mixed with copper to form cruder variants of bronze were manganese, aluminum, silicon, and phosphorous. Co-existing for many years with bronze was the weaker iron, which decays quickly into rust. Eventually, historic forces caused iron to supplant bronze in human tools, ushering in the Iron Age around 1000 BCE, though this date varies depending on the civilization and region being considered.

Alloying a metal is done by combining it with one or more other metals or non-metals that often enhance its properties. For example, steel is stronger than iron, its primary element. Bronze, an alloy of copper and tin, was the first alloy discovered, during the prehistoric period now known as the bronze age,  it was harder than pure copper and originally used to make tools and weapons, but was later superseded by metals and alloys with better properties. Brass is an alloy made from copper and zinc.

The use of alloys by humans started with the use of meteoric iron, a naturally occurring alloy of nickel and iron. The term alloy is used to describe a mixture of atoms in which the primary constituent is a metal.

If there is a mixture of only two types of atoms, not counting impurities, such as a copper-nickel alloy, then it is called a binary alloy. If there are three types of atoms forming the mixture, such as iron, nickel and chromium, then it is called a ternary alloy. An alloy with four constituents is a quaternary alloy, while a five-part alloy is termed a quinary alloy. Pig iron, a very hard but brittle alloy of iron and carbon, was being produced in China as early as 1200 BC, but did not arrive in Europe until the Middle Ages.

These metals found little practical use until the introduction of crucible steel around 300 BC. When a molten metal is mixed with another substance, there are two mechanisms that can cause an alloy to form, called atom exchange and the interstitial mechanism. Examples of substitutional alloys include bronze and brass, in which some of the copper atoms are substituted with either tin or zinc atoms.

Alloys are often made to alter the mechanical properties of the base metal, to induce hardness, toughness, ductility, or other desired properties. While most metals and alloys can be work hardened by inducing defects in their crystal structure, caused by plastic deformation, some alloys can also have their properties altered by heat treatment. At a certain temperature, the base metal of steel, iron, undergoes a change in the arrangement of the atoms in its crystal matrix, called allotropy.

This allows the small carbon atoms to enter the interstices of the crystal. For example, 14 karat gold is an alloy of gold with other elements. The term “alloy” is sometimes used in everyday speech as a synonym for a particular alloy. For example, automobile wheels made of an aluminium alloy are commonly referred to as simply “alloy wheels”, although in point of fact steels and most other metals in practical use are also alloys. Mercury dissolves many metals, such as gold, silver, and tin, to form amalgams (an alloy in a soft paste, or liquid form at ambient temperature). Many ancient civilizations alloyed metals for purely aesthetic purposes. In ancient Egypt and Mycenae, gold was often alloyed with copper to produce red-gold, or iron to produce a bright burgundy-gold. Silver was often found alloyed with gold.

Because pig iron could be melted, people began to develop processes of reducing the carbon in the liquid pig iron to create steel. The Bessemer process was able to produce the first large scale manufacture of steel. Once the Bessemer process began to gain widespread use, other alloys of steel began to follow, such as mangalloy, an alloy of steel and manganese, which exhibits extreme hardness and toughness.

Zinc Alloys are combinations of zinc with one or more other metals. If zinc is the primary constituent of the alloy, it is a zinc-base alloy. Zinc also is commonly used in varying degrees as an alloying component with other base metals, such as copper, aluminum, and magnesium. A familiar example of the latter is the association of varying amounts of zinc (up to 45%) with copper to produce brass. Zinc, a crystalline metal with moderate strength and ductility, is seldom used alone except as a coating. After iron, aluminium and copper, zinc is usually the fourth-most used metal. There are many wrought alloys with various alloying elements to improve workability and strenght. There are two major Zinc alloy groups for casting. The first is a standard casting alloy that is primarily Zinc in a hypo-eutectic alloy with less than 5% Aluminum. The Second is the newer group of Zinc-Aluminum alloys. These are hyper-eutectic alloys with up to 27% Aluminum. Both groups are primarily used in die casting.

Aluminium alloys are alloys in which aluminium (Al) is the predominant metal. The typical alloying elements are copper, magnesium, manganese, silicon and zinc. There are two principal classifications, namely casting alloys and wrought alloys, both of which are further subdivided into the categories heat-treatable and non-heat-treatable. About 85% of aluminium is used for wrought products, for example rolled plate, foils and extrusions. Cast aluminium alloys yield cost effective products due to the low melting point, although they generally have lower tensile strengths than wrought alloys. The most important cast aluminium alloy system is Al-Si, where the high levels of silicon (4.0% to 13%) contribute to give good casting characteristics. Aluminium alloys are widely used in engineering structures and components where light weight or corrosion resistance is required.

Titanium alloys are metallic materials which contain a mixture of titanium and other chemical elements. Such alloys have very high tensile strength and toughness (even at extreme temperatures), light weight, extraordinary corrosion resistance, and ability to withstand extreme temperatures. However, the high cost of both raw materials and processing limit their use to military applications, aircraft, spacecraft, medical devices, connecting rods on expensive sports cars and some premium sports equipment and consumer electronics. Auto manufacturers Porsche and Ferrari also use titanium alloys in engine components due to its durable properties in these high stress engine environments.

Magnesium alloys are mixtures of magnesium with other metals (called an alloy), often aluminium, zinc, manganese, silicon, copper, rare earths and zirconium. Magnesium is the lightest structural metal. Magnesium alloys have a hexagonal lattice structure, which affects the fundamental properties of these alloys. Plastic deformation of the hexagonal lattice is more complicated than in cubic latticed metals like aluminum, copper and steel. Therefore magnesium alloys are typically used as cast alloys, but research of wrought alloys has been more extensive since 2003. Cast magnesium alloys are used for many components of modern cars, and magnesium block engines have been used in some high-performance vehicles, die-cast magnesium is also used for camera bodies and components in lenses.

Copper alloys are metal alloys that have copper as their principal component. They have high resistance against corrosion. The best known traditional types are bronze, where tin is a significant addition, and brass, using zinc instead. Both these are imprecise terms, and today the term copper alloy tends to be substituted, especially by museums. The similarity in external appearance of the various alloys, along with the different combinations of elements used when making each alloy, can lead to confusion when categorizing the different compositions. There are as many as 400 different copper and copper-alloy compositions loosely grouped into the categories: copper, high copper alloy, brasses, bronzes, copper nickels, copper–nickel–zinc (nickel silver), leaded copper, and special alloys. The following table lists the principal alloying element for four of the more common types used in modern industry, along with the name for each type. Historical types, such as those that characterize the Bronze Age, are vaguer as the mixtures were generally .

Nickel-base alloys are used in many applications where they are subjected to harsh environments at high temperatures. Nickel-chromium alloys or alloys that contain more than about 15% Cr are used to provide both oxidation and carburization resistance at temperatures exceeding 760°C. Nickel-base alloys offer excellent corrosion resistance to a wide range of corrosive media. However, as with all types of corrosion, many factors influence the rate of attack. The corrosive media itself is the most important factor governing corrosion of a particular metal. Low-Expansion Alloys Nickel was found to have a profound effect on the thermal expansion of iron.

Alloys can be designed to have a very low thermal expansion or display uniform and predictable expansion over certain temperature ranges. Iron-36% Ni alloy (Invar) has the lowest expansion of the Fe-Ni alloys and maintains nearly constant dimensions during normal variations in atmospheric temperature.The addition of cobalt to the nickel-iron matrix produces alloys with a low coefficient of expansion, a constant modulus of elasticity, and high strength. Electrical Resistance Alloys. Several alloy systems based on nickel or containing high nickel contents are used in instruments and control equipment to measure and regulate electrical characteristics (resistance alloys) or are used in furnaces and appliances to generate heat (heating alloys).