The basic concept of cathodic protection is that the electrical potential of the subject metal is reduced below its corrosion potential, and that it will then be incapable of going into solution, or corroding.

Indeed the principles of corrosion reactions are used in the design and construction of expendable and re-chargeable batteries and accumulators which play such a major part in modern life. Likewise a car battery on charge does not corrode, in fact in this case the reaction is reversible, and energy is ‘pumped back in’. 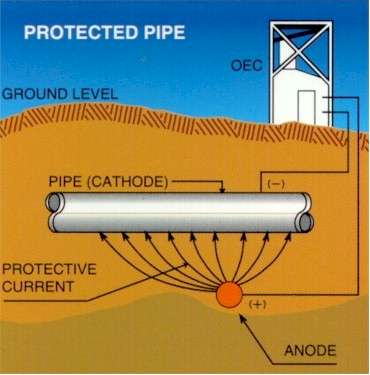 However, a battery has a very carefully composed electrolyte which has qualities to ensure a predictable reaction with the other components of the battery. We know that the corrosion within a battery can be controlled very accurately, by external electrical input, as this technique is in common use with rechargeable batteries which are nowadays controlled by computers which balance the reaction equilibrium to suit their own power demands.

Unfortunately a cathodic protection system is not composed of simple elements in the way that batteries are, because the electrolyte is the ground itself. This electrolyte is uncontrollable and has an almost infinite variety of qualities. The chemical composition and electrical conductivity can span a vast range, as can the temperatures and pressures to which the reaction is subjected.

Pipelines can be regarded as many interface reactions connected together in parallel. The metal element can be well defined, as this is specified to a high degree by the designers, as is the coating material. It is possible to calculate the theoretical resistance of a perfectly coated pipeline, given the specification of the coating and dimensions of the pipeline, but it is impossible to calculate the actual resistance of the total pipeline. 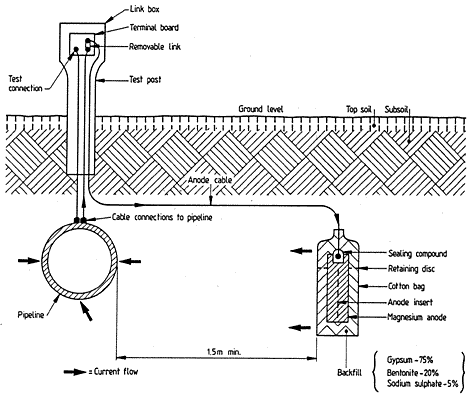 Cathodic protection (CP) is a technique used to control the corrosion of a metal surface by making it the cathode of an electrochemical cell. Cathodic protection systems are used to protect a wide range of metallic structures in various environments. Common applications are; steel water or fuel pipelines and storage tanks; steel pier piles; ships and boats; offshore oil platforms and onshore oil well casings and metal reinforcement bars in concrete buildings and structures. 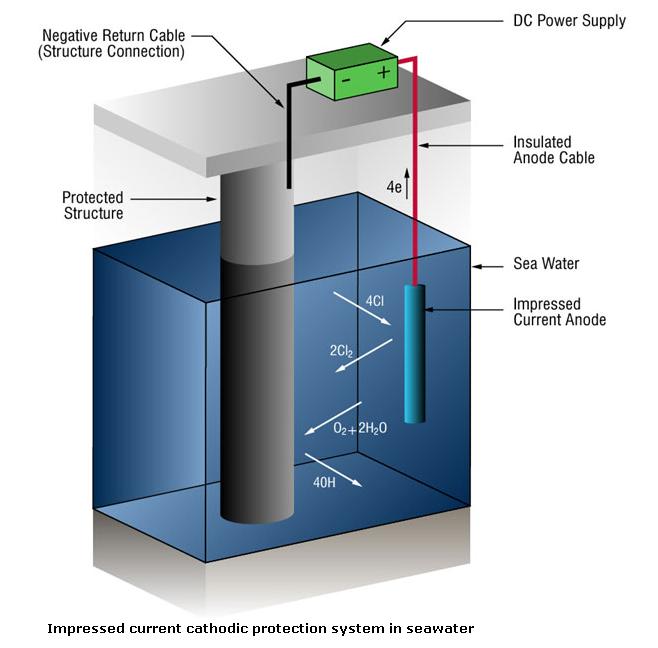 Power is supplied by an external DC power unit.

How Do We Know When We Have Enough Cathodic Protection ?

We know whether or not we have enough current by measuring the potential of the steel against a standard reference electrode, usually silver silver/chloride (Ag/AgCl), but sometimes zinc. Current flow onto any metal shifts its normal potential in the negative direction. 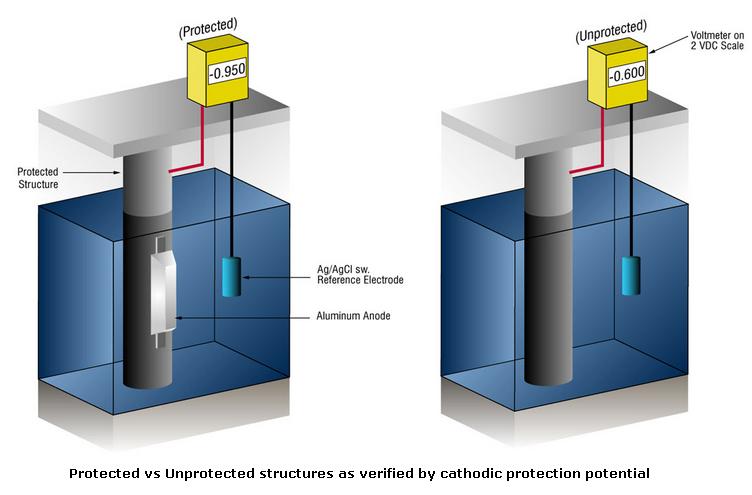 History has shown that if steel receives enough current to shift the potential to (-) 0.800 V vs. silver / silver chloride (Ag / AgCl), the corrosion is essentially stopped. Due to the nature of the films which form, the minimum (-0.800 V) potential is rarely the optimum potential, and designers try to achieve a potential between (-) 0.950 V and (-) 1.000 V vs. Ag/AgCl.