Metal deformations are introduced through the application of external forces to the workpiece, these forces being in equilibrium. With the application of load to the workpiece, internal stress and displacements are generated causing shape distortions. If the loads are low, then with the release of the loads, the internal stresses will disappear and the workpiece will be restored to its original shape. It is then said that the applied loads were elastic and so were the stresses and strains. Elastic strains are recoverable on release of the loads. 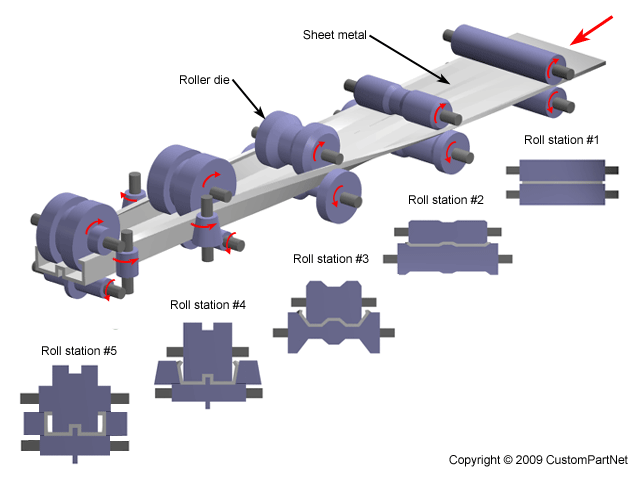 Thus, only plastic deformations are considered. It is also recognized that plastic deformations do not involve volumetric changes. Thus, volume constancy is maintained. In metals, the load and the intensity of the internal stresses at which (plastic) flow initiates are functions of the structure, the temperature, the deformation history, and the rate of straining. It is fair to assume that at temperatures below the recrystallization temperatures at which new crystal structures emerge the material strain hardens but is not strain-rate sensitive. That is, the strength of the material increases with increased deformation levels. Above the recrystallization temperature, the material is strain-rate sensitive. That is, its strength is higher with higher rates of straining, but it does not strain harden. 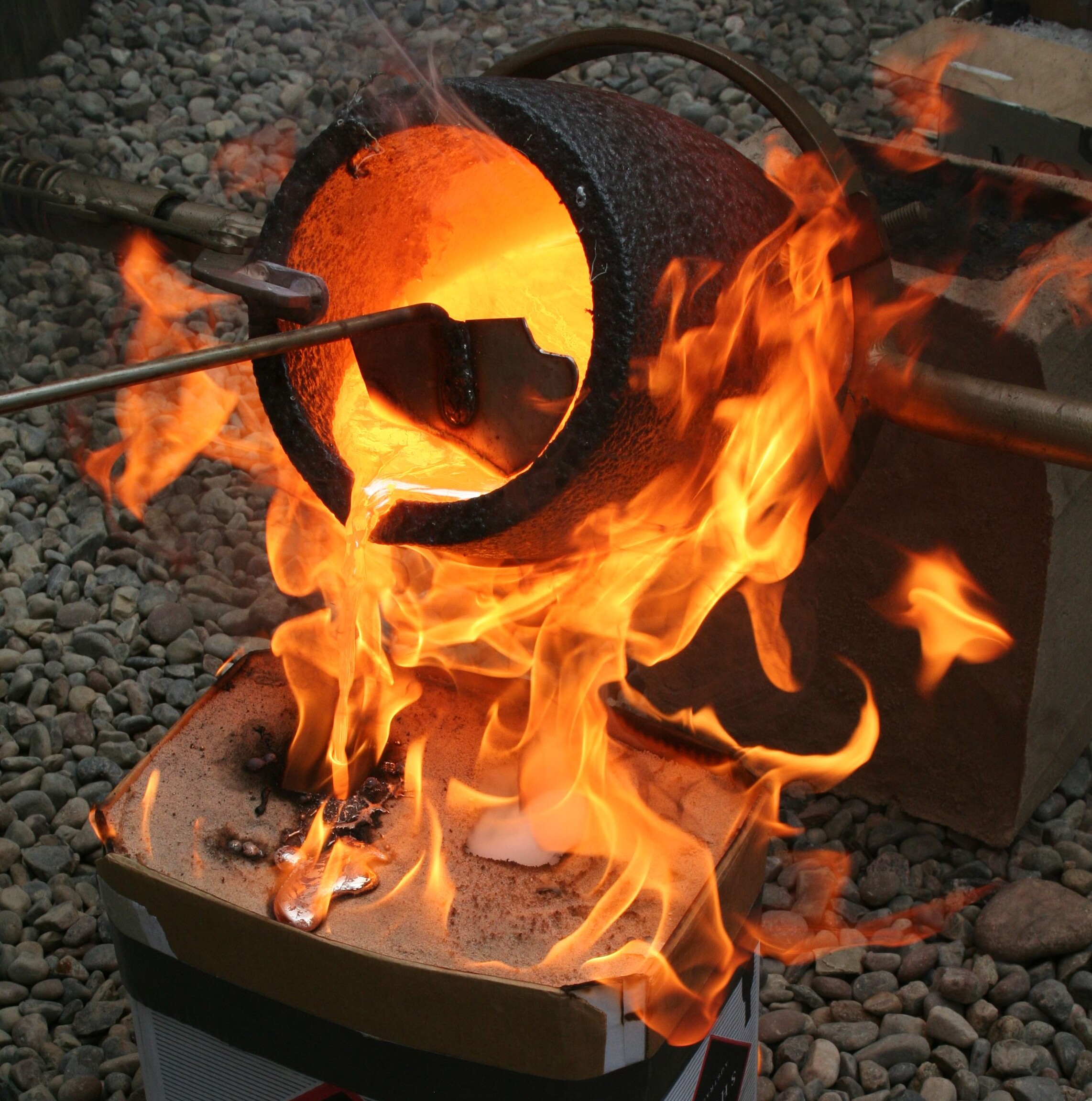 Casting : Manufacturing process in which liquid metal is poured into a mold that contains a hollow cavity with the desired shape and detail. The part is allowed to solidify and is then ejected from the mold to complete the process.

Forging : Metalworking process used to shape metal by hammering or using compressive forces. It is used for shapes impossible or too costly to manufacture by other methods or requiring properties not available by casting. Categories of forging include hammer, press, drop, or stamping.  Forging is a most popular production process because it lends itself to mass production as well as to the production of individual sample parts. The origins of forging may be traced to the ancient process of hammering of gold foil, between a rock, the anvil, and a stone, the hammer. 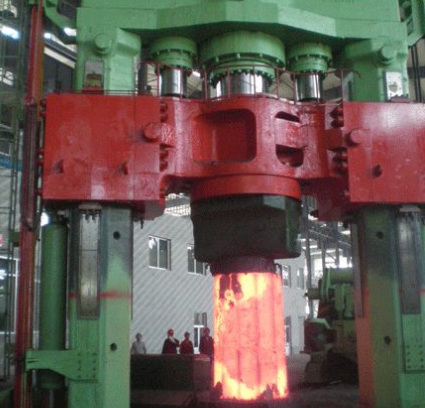 In hammering, the inertia of the fast moving hammer provides the required deformation energy and force, while in pressing the force is static. Usually the final shape is imparted on the workpiece by manipulating the workpiece between the flat anvil and the flat hammer as the hammer hits the workpiece repeatedly. Complex shapes can be hammered by skilled blacksmiths. A conical protrusion from the anvil, holes in the anvil, a variety of pegs with different cross sections, and auxiliary tools, including a large selection of shaped hand hammers, may assist the blacksmiths and their helpers.

Today, hand-held hammers are replaced by mechanical and hydraulic presses. When a large number of identical components are manufactured, the open dies are replaced by closed dies , each with a shaped cavity to impart its shape to the product. The workpiece does not have to be manipulated, and the operator therefore does not have to be skilled, completion of the product can be achieved in one stroke and processing efficiency is high. Feeding the blank and ejection of the product are automated. Mass production of a technological age emerges out of the ancient art for ornament and artistic values. 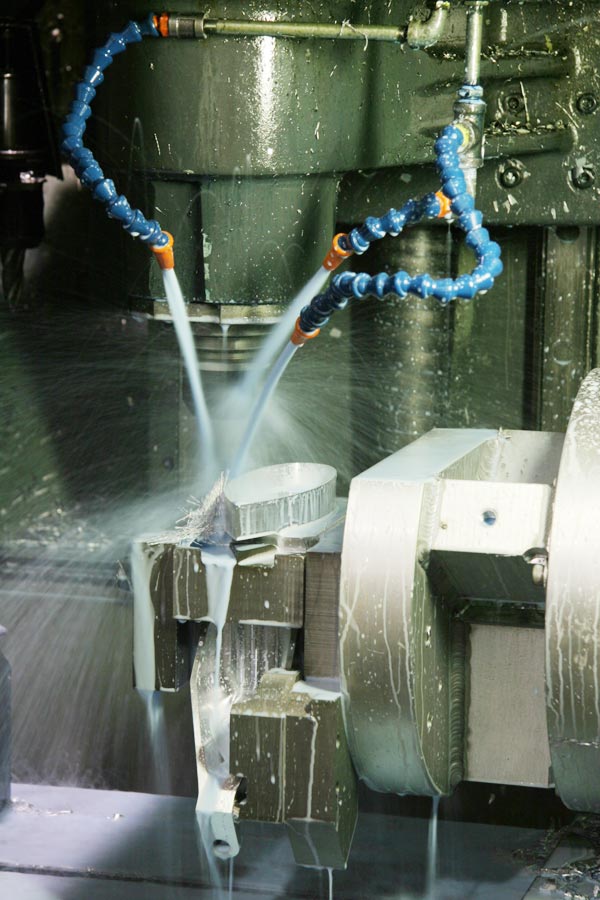 CNC Machining : Computer Numerical Controlled (CNC) machines use a program from a computer file generated from CAD software to provide the commands necessary to operate a particular machine to manufacture parts to a defined specification. This highly automated process allows for the consistent manufacture of intricately detailed products. 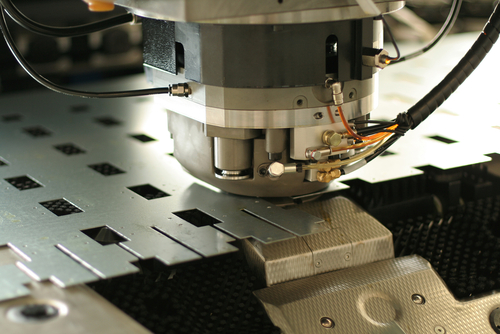 Stamping : Manufacturing process that can be performed on sheet metal and other materials where every stroke of the press can produce the desired form on a sheet metal part. For more detailed parts, the stamping process can occur in a series of stages.

Bending : Common metalworking technique used to process sheet metal, tube, and other materials. Bending is a step on the metalworking process that is used to create a radius or to form and stretch materials into a desired shape. 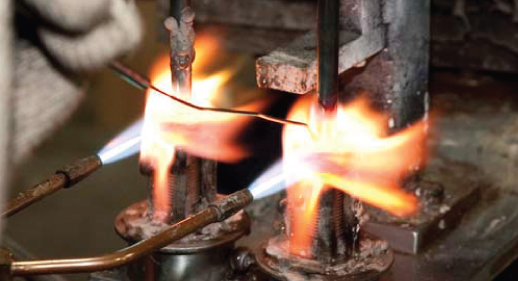 Brazing : Process where a filler metal or alloy is heated to a particular melting temperature to join two or more close-fitting parts via capillary action (movement of molten metal through porous media).