Corrosion  is a chemical process that eats metals commonly used in plumbing, making them fail. One type of corrosion attacks and gradually thins the entire metal surface, often causing “red water” in iron or steel water systems, or blue stains in copper or brass systems. Another attacks small areas, and deep pits develop and penetrate pipe or tank walls. This type of corrosion usually does not add iron or copper to the water, but even a single hole in a pipe length or a tank can destroy its usefulness. 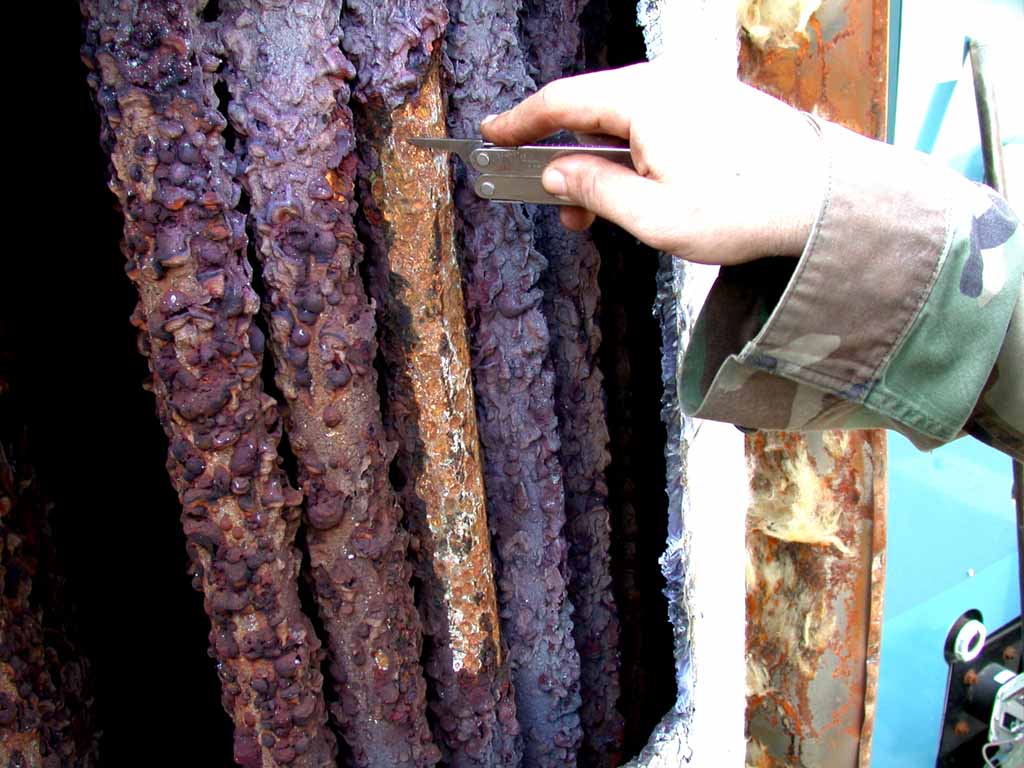 Corrosion is the disintegration of an engineered material into its constituent atoms due to chemical reactions with its surroundings. In the most common use of the word, this means electrochemical oxidation of metals in reaction with an oxidant such as oxygen. Formation of an oxide of iron due to oxidation of the iron atoms in solid solution is a well-known example of electrochemical corrosion, commonly known as rusting. This type of damage typically produces oxide(s) and/or salt(s) of the original metal. Corrosion can also occur in materials other than metals, such as ceramics or polymers, although in this context, the term degradation is more common.

R­ust is the common name for a very common compound, iron oxide. Iron oxide, the chemical Fe2O3, is common because iron combines very readily with oxygen  so readily, in fact, that pure iron is only rarely found in nature.

Fresh water may come from either a surface or ground source, and typically contains less than 1% sodium chloride. It may be either “hard” or “soft,” i.e., either rich in calcium and magnesium salts and thus possibly forming insoluble curds with ordinary soap. Actually, there are gradations of hardness, which can be estimated from the Langelier or Ryznar indexes or accurately determined by titration with standardized chelating agent solutions such as versenates.

Brackish water contains between 1 and 2.5% sodium chloride, either from natural sources around otherwise fresh water or by dilution of seawater. Brackish water differs from open seawater in certain other respects. The biological activity, for example, can be significantly modified by higher concentrations of nutrients. Fouling is also likely to be more severe as a consequence of the greater availability of nutrients. Within harbors, bays, and other estuaries, marked differences can exist in the amount and type of fouling agents present in the water.

Seawater typically contains about 3.5% sodium chloride, although the salinity may be weakened in some areas by dilution with fresh water or concentrated by solar evaporation in others.

Seawater is normally more corrosive than fresh water because of the higher conductivity and the penetrating power of the chloride ion through surface films on a metal. The rate of corrosion is controlled by the chloride content, oxygen availability, and the temperature.

Effect of velocity on the corrosion of metals in seawater

The total mineral content of water can be removed by either distillation or mixed-bed ion exchange. In the first case, purity is described qualitatively in some cases (e.g., triple-distilled water), but is best expressed, for both distilled and demineralized water, in terms of specific conductivity. Water also can be demineralized by reverse osmosis or electrodialysis.

Water condensed from industrial steam is called steam condensate. It approaches distilled water in purity, except for contamination (as by DO or carbon dioxide) and the effect of deliberate additives (e.g., neutralizing or filming amines).

The feedwater make-up for boilers is always softened and subsequently deaerated. It may vary in quality from fairly high dissolved solids (e.g., Zeolite-Treated), to very pure demineralized feed for high-pressure boilers. It tends to be highly corrosive, because of its softness, until thoroughly deaerated. This term is more precise than “boiler feedwater”, which may include recirculated steam condensate in various ratios to fresh make-up water.

Potable water is fresh water that is sanitized with oxidizing biocides such as chlorine or ozone to kill bacteria and make it safe for drinking purposes. By definition, certain mineral constituents are also restricted. For example, the chlorinity will be not more than 250 ppm chloride ion in the United States or 400 ppm on an international basis.

These terms are essentially non-definitive, since the water employed may be of almost any chemistry, ranging from demineralized water to quite saline fresh water or even seawater in some cases. “Produced water” is that which originates in oil and gas production, emanating from geological sources with the hydrocarbons.

Cooling water is another undefined term, although it implies that any necessary treatment against excessive scaling or corrosion has been applied, or corrosion-resistant material selected. This may include anything from fresh water to seawater, and may comprise either an open- or closed-loop system, or a once-through system.

By definition, waste water is any water that is discarded after use. Sanitary waste from private or industrial applications is contaminated with fecal matter, soaps, detergents, etc., but is quite readily handled from a corrosion standpoint. Industrial wastes from chemical or petrochemical sources can contain strange and specific contaminants which greatly complicate materials selection, especially in the uses of plastics and elastomers.

The pH scale measures acidic and alkaline materials in water. On this scale, 7.0 is the neural point, indicating a perfect balance between the two. Acidic pH values are below 7.0, and alkaline pH values are above 7.0. Rain picks up carbon dioxide from the air, and as it trickles through the earth, decaying vegetation adds more. This carbon dioxide combines with water to form carbonic acid. In areas where groundwater trickles through limestone, carbonic acid and limestone form soluble bicarbonates, neutralizing the acid. The result is alkaline water that is usually hard, has low carbon dioxide concentrations, and pH values between 7 and 8. Where underground strata do not contain limestone, groundwater retains acidity, has pH values between 6 to 7, and corrodes metals used in plumbing.

Absolutely pure water conducts electricity very poorly, but many dissolved minerals and gases separate into charged particles called ions, which are capable of conducting electricity. Thus, water that has few dissolved minerals is a poor conductor, but water containing high mineral concentrations is a relatively good conductor. Two different metals in contact with each other and a solution that conducts electricity create a galvanic cell. This cell generates electricity, and one metal dissolves, or corrodes, in proportion to the electricity generated. This galvanic corrosion occurs very close to the joint between the metals. Plumbers generally use several metals in a water system. Galvanized pipe systems often use brass valves, and the zinc, or galvanizing surface, is broken at the pipe ends or threads. Copper plumbing often has solder at joints, and valves are made of a different alloy.

The combination of oxygen and water is very corrosive. A steel fence post, for example, usually rusts off at ground level where moisture and oxygen are present. Wherever water is exposed to the air, some of the oxygen is absorbed. The oxygen dissolved in rain and surface water is consumed as water seeps into the ground through layers of decaying organic matter. Deep well waters are usually free of dissolved oxygen, except in areas where the ground contains little organic matter or where the air cushion in a pneumatic pressure tank contributes air to water from a deep well. A very thin hydrogen film forms during surface corrosion and is a barrier to further corrosion. However, any oxygen present combines with the hydrogen film and removes it from the surface, permitting corrosion. A number of experts are convinced that some oxygen must be present for any significant corrosion.

Corrosion is faster at higher temperatures. The corrosion rate of steel may increase three to four times when water temperature rises from 60°F to 140°F. Above 140°F, the rate doubles with every 20°F increase in temperature.  Galvanizing steel deliberately establishes a galvanic cell. At normal temperatures, the zinc coating goes into solution and deposits on exposed steel, protecting it against further corrosion. Between 140° and 160° F, this action reverses. At temperatures above this, the iron in the steel goes into solution in an attempt to protect the steel. Since the areas of exposed steel are usually small, the rate of steel corrosion concentrates in those areas and perforates the pipe wall. It is impossible to halt the corrosion process completely, but it can usually be reduced to tolerable levels.

Acid neutralization by installing a filter that contains calcite (calcium carbonate) or magnesia (magnesium oxide) is one method. Overfeeding does not occur, because as the water is neutralized, the dissolving action stops. Neutralizing filters must be backwashed periodically, because they do not remove solid particles. Material particles at the bed’s top become so small they frequently clog it.

Additional material must be added to the filterbed to replace those dissolved. Another method of neutralizing acid water is to feed a soda ash solution, or sodium carbonate, to the water supply through a chemical feed pump. This pump can operate with a well pump to produce an adequate amount of soda ash in the water flow. Soda ash solution added ahead of the pressure tank produces the best results. The rate of the feed pump should produce a treated water pH of 7.5 to 8.0. A neutralizing filter is usually the best approach if acidity is the only problem.

Corrosion in household water systems is controllable. Filters that neutralize acidic waters and soda ash fed by chemical solution feeders are two methods. A third method is to form a protective film in a water system by using polyphosphates and silicates. Setting water heaters no higher than 140°F also helps. Use similar metals where possible in plumbing systems to help control corrosion.