Noble metals are metals that are resistant to corrosion and oxidation in moist air, unlike most base metals. They tend to be precious, often due to their rarity in the Earth’s crust. The noble metals are considered to be (in order of increasing atomic number) ruthenium, rhodium, palladium, silver, osmium, iridium, platinum, and gold. 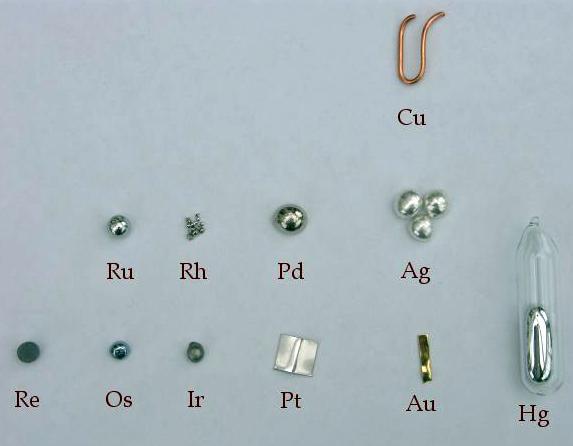 Other sources include mercury or even rhenium as a noble metal. On the other hand, neither titanium nor niobium nor tantalum are called noble metals despite the fact that they are very resistant to corrosion. Noble metals should not be confused with precious metals (although many noble metals are precious).

This term can also be used in a relative sense, considering “noble” as an adjective for the word “metal”. A “galvanic series” is a hierarchy of metals (or other electrically conductive materials, including composites and semimetals) that runs from noble to active, and allows designers to see at a glance how materials will interact in the environment used to generate the series. In this sense of the word, graphite is more noble than silver and the relative nobility of many materials is highly dependent upon context, as for aluminium and stainless steel in conditions of varying pH.

Subsequently, certain metals can be precipitated or reduced directly with a salt, gas , organic, and/or Nitrohydrate connection. Afterwards, they go through cleaning stages or are recrystallized. The precious metals are separated from the metal salt by calcination. The noble-metalliferous materials are hydrolyzed first and thermally prepared (pyrolysed) thereafter. The processes are better yielding when using catalysts that may sometimes contain precious metals themselves. When using catalysts, the recycling product is removed in each case and driven several times through the cycle.

In physics, the definition of a noble metal is even more strict. It is required that the d-bands of the electronic structure are filled. Taking this into account, only copper, silver and gold are noble metals, as all d-like band are filled and don’t cross the Fermi level. For platinum two d-bands cross the Fermi level, changing its chemical behaviour; it is used as a catalyst. The different reactivity can easily be seen while preparing clean metal surfaces in ultra high vacuum; surfaces of “physical defined” noble metals (e.g., gold) are easy to clean and stay clean for a long time, while those of platinum or palladium, for example, are covered by carbon monoxide very quickly.

The column group denotes its position in the periodic table, hence electronic configuration. The simplified reactions, listed in the next column, can also be read in detail from the Pourbaix diagrams of the considered element in water. Finally the column potential indicates the electric potential of the element measured against a H-electrode in aqueous, pH 7 solution. All missing elements in this table are either not metals or have a negative standard potential.

Silver and copper film over and oxidize easily and readily, thus the copper sheets with a patina of oxidation used in architectural designs and the resultant market for a myriad of silver polishing compounds. The film over of Silver is due to its high sensitivity to hydrogen sulfide. Chemically patina is caused by an attack of oxygen in wet air and by CO2 afterward. On the other hand, rhenium coated mirrors are said to be very durable, despite the fact that rhenium and technetium are said to tarnish slowly in moist atmosphere.

The blue platinum group metal osmium is at normal conditions the most heavy element. It is very hard, rare and expensive. So it is only used, when something very durable and small is needed, like sometimes for the ball in good ballpoint pens (in an alloy together with iridium). Its oxide OsO4, which is extremely toxic, has some use as staining agent in microscopy.

A precious metal is a rare, naturally occurring metallic chemical element of high economic value. Chemically, the precious metals are less reactive than most elements, have high lustre, are softer or more ductile, and have higher melting points than other metals. Historically, precious metals were important as currency, but are now regarded mainly as investment and industrial commodities.

The platinum group metal rhodium is the rarest and most valuable stable metal on earth. It is needed in many chemical applications as a catalyst, like for example in the industrial production of acetic acid. Therefore rhodium is very expensive and its price fluctuates strongly. In catalytic converters, it reduces the amount of toxic material that arises from the combustion. Rhodium is furthermore used for plating high-grade mirrors and jewellery. Rhodium is very hard, ductile and noble.

Gold, silver, platinum, and palladium each have an ISO 4217 currency code. The best-known precious metals are the coinage metals gold and silver. While both have industrial uses, they are better known for their uses in art, jewellery and coinage. Other precious metals include the platinum group metals: ruthenium, rhodium, palladium, osmium, iridium, and platinum, of which platinum is the most widely traded.

Ruthenium is the first of the platinum group metals. It is very hard and brittle and is commonly used in alloys and as a catalyst. Like with osmium, its tetroxide is very toxic, but ruthenium is less reactive than osmium.

A metal is deemed to be precious if it is rare. The discovery of new sources of ore or improvements in mining or refining processes may cause the value of a precious metal to diminish. The status of a “precious” metal can also be determined by high demand or market value. Precious metals in bulk form are known as bullion, and are traded on commodity markets. Bullion metals may be cast into ingots, or minted into coins. The defining attribute of bullion is that it is valued by its mass and purity rather than by a face value as money.