Thermal Spray, Spray Galvanizing, Metallizing are all terms that are used to describe the Metalspray process. Other terms like Flamespray, Plasmaspray, Powderspray and High Velocity Oxygen Fuel(HVOF) are used to describe the various Metal spray processes that now exist and have been developed as surface coating solutions to many Industrial problems including Wear(abrasive ,adhesive, fretting, Erosion, cavitation, Impact), thermal barrier coatings, restoration, Oxidation, electrical ( resistance, conductivity).

All methods of thermal spraying involve the projection of small molten particles onto a prepared surface where they adhere and form a continuous coating. To create the molten particles, a heat source, a spray material and an atomisation/projection method are required. Upon contact, the particles flatten onto the surface, freeze and mechanically bond, firstly onto the roughened substrate and then onto each other as the coating thickness is increased.

Vacuum plasma spraying (VPS) is a technology for etching and surface modification to create porous layers with high reproducibility and for cleaning and surface engineering of plastics, rubbers and natural fibers as well as for replacing CFCs for cleaning metal components. This surface engineering can improve properties such as frictional behavior, heat resistance, surface electrical conductivity, lubricity, cohesive strength of films, or dielectric constant, or it can make materials hydrophilic or hydrophobic.

The process typically operates at 39–120 °C to avoid thermal damage. It can induce non-thermally activated surface reactions, causing surface changes which cannot occur with molecular chemistries at atmospheric pressure. Plasma processing is done in a controlled environment inside a sealed chamber at a medium vacuum, around 13–65 Pa. The gas or mixture of gases is energized by an electrical field from DC to microwave frequencies, typically 1–500 W at 50 V. The treated components are usually electrically isolated. The volatile plasma by-products are evacuated from the chamber by the vacuum pump, and if necessary can be neutralized in an exhaust scrubber.

Plasma transferred wire arc is another form of wire arc spray which deposits a coating on the internal surface of a cylinder, or on the external surface of a part of any geometry. It is predominantly known for its use in coating the cylinder bores of an engine, enabling the use of Aluminum engine blocks without the need for heavy cast iron sleeves.

A single conductive wire is used as “feedstock” for the system. A supersonic plasma jet melts the wire, atomizes it and propels it onto the substrate. The plasma jet is formed by a transferred arc between a non-consumable cathode and the type of a wire. After atomization, forced air transports the stream of molten droplets onto the bore wall. The particles flatten when they impinge on the surface of the substrate, due to the high kinetic energy.

During the 1980s, a class of thermal spray processes called high velocity oxy-fuel spraying was developed: A mixture of gaseous or liquid fuel and oxygen is fed into a combustion chamber, where they are ignited and combusted continuously. The resultant hot gas at a pressure close to 1 MPa emanates through a converging–diverging nozzle and travels through a straight section. The fuels can be gases (hydrogen, methane, propane, propylene, acetylene, natural gas, etc.) or liquids (kerosene, etc.). 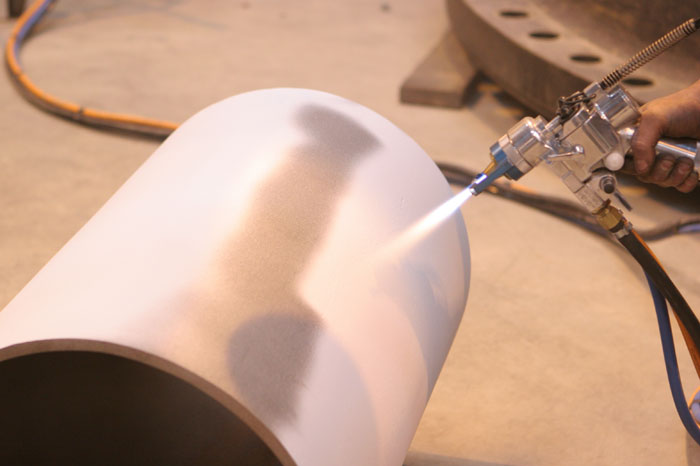 The jet velocity at the exit of the barrel (>1000 m/s) exceeds the speed of sound. A powder feed stock is injected into the gas stream, which accelerates the powder up to 800 m/s. The stream of hot gas and powder is directed towards the surface to be coated. The powder partially melts in the stream, and deposits upon the substrate. The resulting coating has low porosity and high bond strength.