Do you know the Hydrogen Bomb ?

What is a Hydrogen Bomb ?

Hydrogen bomb or H-bomb is the most powerful type of nuclear bomb, as much as 25,000 times the yield of the nuclear bombs dropped on Hiroshima and Nagasaki, Japan. The weapon deriving a large portion of its energy from the nuclear fusion of hydrogen isotopes. In an atomic bomb, uranium or plutonium is split into lighter elements that together weigh less than the original atoms, the remainder of the mass appearing as energy.

Unlike this fission bomb, the hydrogen bomb functions by the fusion, or joining together, of lighter elements into heavier elements. Because extremely high temperatures are required in order to initiate fusion reactions, the hydrogen bomb is also known as a thermonuclear bomb.

Great Britain, France, and China have also exploded thermonuclear bombs, and these five nations comprise the so-called nuclear club—nations that have the capability to produce nuclear weapons and admit to maintaining an inventory of them. South Africa’s apartheid regime built six nuclear bombs but dismantled them later. 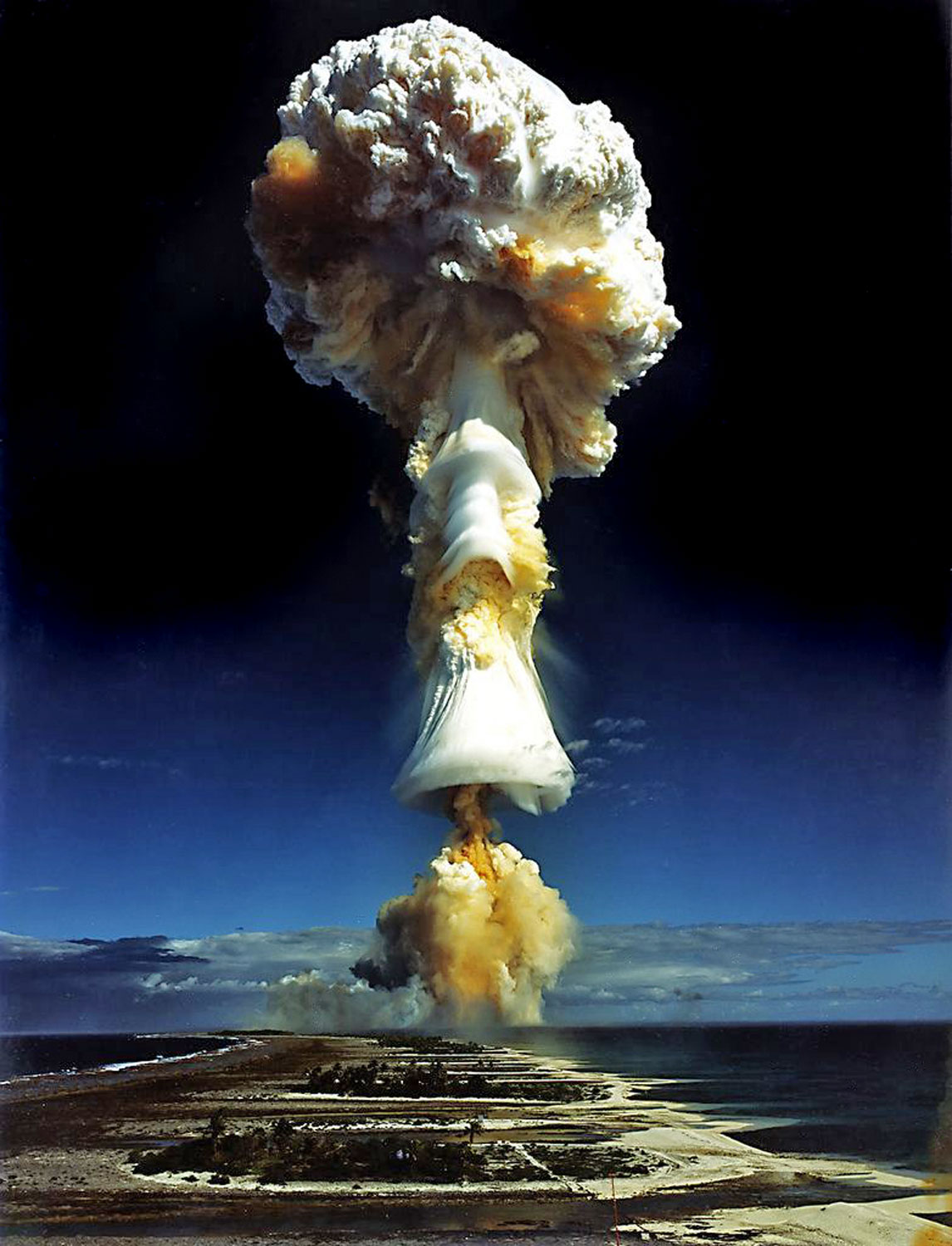 Neutrons from the atomic explosion cause the lithium to fission into helium, tritium (the isotope of hydrogen with mass number 3), and energy. Enough neutrons are produced in the fusion reactions to produce further fission in the core and to initiate fission in the tamper.

Since the fusion reaction produces mostly neutrons and very little that is radioactive, the concept of a “clean” bomb has resulted: one having a small atomic trigger, a less fissionable tamper, and therefore less radioactive fallout. Carrying this progression further would result in the suggested neutron bomb.

The theorized cobalt bomb. is, on the contrary, a radioactively “dirty” bomb having a cobalt tamper. Like other types of nuclear explosion, the explosion of a hydrogen bomb creates an extremely hot zone near its center. A hydrogen bomb is, by far, the most destructive weapon that mankind has ever invented.

It is the most powerful type of nuclear bomb, as much as 25,000 times the yield of the nuclear bombs dropped on Hiroshima and Nagasaki, Japan. Unlike conventional atom bombs (also known as A-bombs), which release energy by fissioning (breaking apart) heavy atomic nuclei like uranium and plutonium, a hydrogen bomb releases energy by fusing together light nuclei like tritium or deuterium, converting even more matter into energy. The largest nuclear bombs, and the backbone of the nuclear arsenal of the United States and Russia, are hydrogen bombs.

These bombs work using a two-stage design whereby a fission bomb “primary” is detonated using the conventional implosion method, which then compresses a fusion fuel “secondary” and ignites a uranium “spark plug” which fissions and subjects the fusion fuel to the heat necessary to begin a chain reaction — about 20 million degrees F. An H-bomb is a three-stage weapon: fission, fusion, and then fission again. The energy release at this stage is mainly due to nuclear fission — because the atoms of plutonium are split.

Tritium is often added to the centre of the plutonium core to “boost” the fission explosion with some additional fusion energy. The second stage explosion is due to nuclear fusion in the central column. The main fusion reaction involves concentrated deuterium and tritium (both heavy isotopes of hydrogen) — which become spontaneously available when neutrons from the first stage explosion bombard a solid material called “lithium deuteride” located in the central column. When this hydrogen-rich mix is heated to 100 million degrees, the deuterium and tritium atoms “fuse” together, releasing enormous amounts of energy. This is the “H” or “thermonuclear” part of the bomb.

Unlike fission bombs, which rely only on nuclear fission, and which can achieve explosions equivalent to thousands of tons of TNT (“kilotons”), the power of an H-bomb or thermonuclear weapon has no practical limit — it can be made as powerful as you want, by adding more deuterium/tritium to the second stage. The ultimate success of the United States thermonuclear program rested on five factors.

The hydrogen bomb problem required complex interactions among physicists, chemists, and metallurgists. The idea for a hydrogen bomb came from the thermonuclear study of stars conducted in the 1930s by Hans Bethe. Unlike fission weapons, which derive their energy from splitting atoms of the heavy elements uranium and plutonium, hydrogen bombs derive their power from fusing atoms of the light element hydrogen. Since fusion can only be achieved with stellar temperatures, hydrogen bombs were not possible until such a heat source (fission bombs) became available.

Pressure to build it seemed to mount with the discovery that Manhattan Project scientist Klaus Fuchs had passed nuclear secrets-including concepts for a hydrogen bomb-to the Soviets. Fuchs left Los Alamos on June 15, 1946. Teller later claimed that radiation-implosion — the key concept behind the successful hydrogen bomb — had also been discussed at the Los Alamos meeting. Klaus Fuchs, with the participation of John von Neumann, proposed a new triggering device.